X-raid Mini driver Nani Roma has sustained head and neck injuries in a crash during the third stage of the 2018 Dakar Rally, forcing him out of the event. 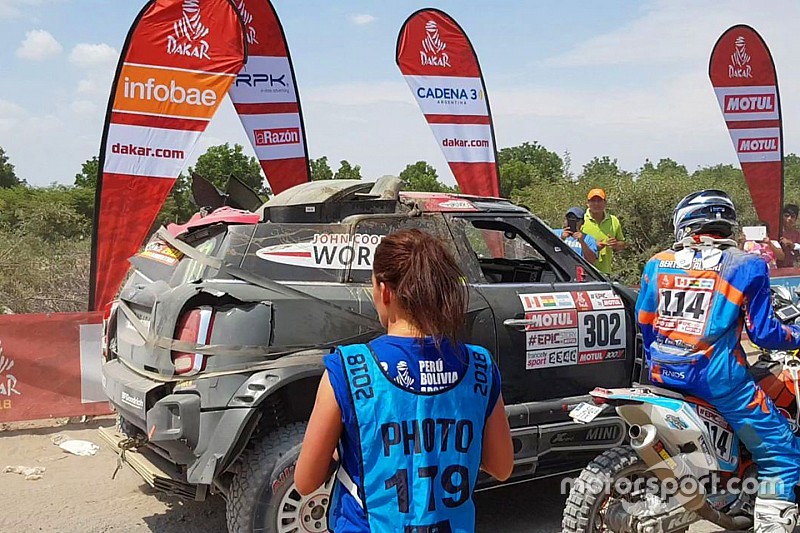 Roma, a two-time Dakar champion, rolled his Mini John Cooper Works Rally car one kilometre before the end of the day's 296km timed special on the route between Pisco and San Juan de Marcona.

Despite the accident, he and co-driver Alex Haro arrived at the finish line of the timed section only 26 minutes down on stage winner Nasser Al-Attiyah.

But while Haro escaped the crash largely unscathed, Roma required medical assistance and was diagnosed with head and neck trauma.

The 45-year-old Catalan driver was evacuated by helicopter to the local airport in Ica, from where he will head to Peruvian capital Lima and its Clinica Anglo Americana for medical tests.

Roma, who returned to the X-raid Mini fold this year after a one-off Dakar outing with Toyota, sits 10th in the general classification of the car category, trailing Peugeot's rally leader Stephane Peterhansel by 43 minutes.

The brought an end to his Dakar 2018 campaign, as he did not complete the 208km road section between the finish of the timed section and the bivouac in San Juan de Marcona, and therefore cannot resume from there on Tuesday.