Robby Gordon, Hummer and Toyo ready for the 2013 challenge starting in Argentina

Charlotte, N.C. – With no desert too large and no mountain too tall, the SPEED Energy HUMMER on victory proven Toyo Tires will once again attempt to conquer the world’s most famous off-road event.

The custom-built Dakar HUMMER driven by Robby Gordon and navigator Kellon Walch will tackle more than 8000 Km / 4970 Mi from Peru through Argentina and ending in Santiago, Chile making it the ultimate off-road adventure; the 35th Annual Dakar Rally.

Registration discussions between A.S.O and Team Gordon began back in the early summer months in preparation for the 2013 Dakar Rally, and on December 2 registration for the SPEED Energy / Toyo Tires / MAPEI HUMMER became official.

“I am excited to go back to race the prestigious Dakar Rally and show the world that we are ready to give it our best shot once again at an overall victory. 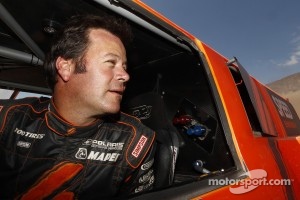 Obviously our cars are good enough to compete for the win. Last year we had the fastest cars at the rally and led the most check points with the fastest times, with five wins as a team, two wins with the second HUMMER (which was also approved and is available to compete) and three wins for myself.

It is now time for us to go back and capitalize on what we developed and worked on over the last seven years to put ourselves in position to compete for the overall win. “

For the first time in its history, the Dakar Rally will begin in Lima, Peru, sending upwards of 460 vehicles from 53 countries on a two-week, 14-stage endurance race through 3 Western South American countries, ultimately finishing in the Chilean capital of Santiago.

This year’s Dakar will begin on January 5 and will travel on a new course featuring sections not seen to racing since the moving of the Dakar to South America in 2009, marking the most difficult course to date.

Gordon will be joined in the cockpit by his navigator, Kellon Walch, who served as team navigator for B.J. Baldwin in 2010 and for Gordon in 2011.

Walch looks to bring back the experience and chemistry gained as the team’s navigator in previous rally races along with the focus and drive needed to guide the vehicle through the challenging navigation obstacles that Gordon will face. 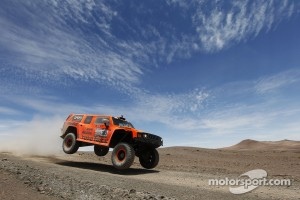 The various aspects of Peru’s natural features will put a real test to the SPEED Energy / Toyo Tires / MAPEI Dakar HUMMER in the early stages of the rally as Gordon will face gigantic dunes and rugged terrain requiring precise focus and skill to gain an early advantage.

Entering Chile will set the stage for a fast pace duel through the desert before crossing the Andes Mountains into Argentina where record altitude and temperature will become a crucial factor for driver and navigator.

After a much needed day of rest on the eighth day, the SPEED Energy / Toyo Tires team will set out for the longest and most technical stage of the Rally navigating through the narrow twists and turns of the forest.

The rapid assistance vehicles will not have access to this stage, requiring precise driving to be a must. Entering Chile for the final stages of the Rally will once again bring dunes into the equation, testing the driver’s fatigue and equipment to the finish in Santiago.

Once reaching the Chilean capital, the small percent of the drivers who finish the 2013 Dakar Rally will partake in a short show course offering spectators and fans the chance to cheer on the new heroes who have successfully conquered the 2013 Dakar Rally.

The following day the accomplishment of each of the drivers will be recognized with an elaborate ceremony planned on the Plaza de la Constituciόn.