Robb's Dakar ride: the end of the line 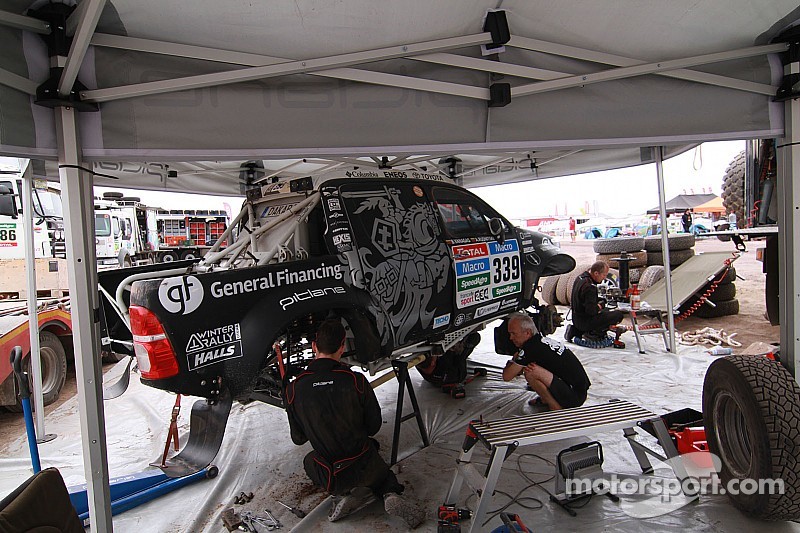 The checkered flag has flown on the 2015 edition of Dakar.

With the slippery surface on the stage yesterday there was a lot of panel damage and several piles of discarded doors and wings were lying on the horse racing track in Rosario this morning. Our last night sleeping on camp beds out in the open and hopefully the last of the 5 hours of sleep.

Benediktas Vanagas gave his mechanics a bit of a test last night and the bent shed they started with looked like a Toyota again come dawn. I knocked the ants out of my laptop bag and then it was back in the convoy again, down streets like with enthusiast flag wavers who’d got up early to see us pass. A little rain shower swept across the farmland landscape but evidently it fell a little harder over the course. We pulled up at the press point wondering why it seemed so quiet… it was because the final stage had been shortened because parts of it were more like the Croatia Trophy than the Dakar. The last hurrah of the insanely tough 2015 Dakar was just 34km long.

The GPS was reprogrammed back to Technopolis where we started this mad trip two weeks ago and the podium where 67 of the 148 starters pulled up onto the arch. In the hall before the final scrutineering I caught up with some of the drivers. Being congratulated by everyone who walked past was of course newly crowned Nasser Al-Attiyah and I asked him how he felt. “It feel fantastic. It’s such a good feeling and in Qatar there is a big celebration now, the phone keeps ringing all the time. This year it feels a lot different to the first win. That was nice but this feels special because we controlled the event from the first to the last. And what next? Well, preparations for the 2016 Dakar start in a couple of weeks. I will do the Middle East rally championship and the WRC teaches me speed and I will also do events in the FIA Cross Country World Cup. Last year we missed the title by a couple of points so I would like to do a little better…”

Stephane Peterhansel was also in a really positive mood. “11th this year feels much better than 2nd in 2014 and I am really excited to be part of the new Peugeot history. I am also happy for Nasser and he was the logical winner as he has the fastest car and a really good co-driver… but next year I hope we’ll make it a little harder for him. Two months ago we couldn’t do 200km of testing without some technical problem so to get two cars back is very, very positive. Also Carlos Sainz retired after a crash, it was nothing mechanical. So now we will have some work on the chassis, the engine and the tyres and maybe next time we will be 2% or 5% faster. We’ll see.”

Winner of the T2 class for standard cars is unsurprisingly Jun Mitsuhashi who now has 5 class victories to his name. On the rest day he told me that he was so accustomed to leading the class and winning that it was hard to keep his motivation… and not concentrating on a tricky dune, he rolled. “Then in the next days when I was in the dust of other cars I had to concentrate, but these 5 wins are enough for me now. Maybe I will work as a support car or a driver teacher in the future. Now I don’t know, but 5 wins is enough!”

Not looking as relaxed as I would have thought seeing that he went through so much, driving the last 5 days with a broken arm, but Beneditkas in the black No 339 car made it back to the finish. “I will finally relax only after the podium,” he said. “The event is so hard to do but is somehow like Stockholm Syndrome because very soon I’ll be dreaming about coming back again. This time we didn’t really get the result that we were hoping for… but I suppose that everyone that came after Nasser will say the same thing. We came away with a lot of experience though which is very valuable and we will include this in our plans for next year.”

Just ahead of them heading into the scrutineering hall was the blue buggy of Antonio Hasbun, playing a game of who can make the best echoes with their V8s with Guerlain Chicherit. Their secret plan for the event was to drive conservatively and make it look like they were having a lot of problems everywhere to lull pretty much the whole field into a false sense of security and then go for a massive and unresistable attack for the overall win on the final day. Unfortunately having the stage cut short didn’t help them claw back any of the 48 ½ hours and while they were trying to pull themselves out of a ditch the rapid Qatari actually eked out another 37 minutes to finish with a margin just a little over 2 days. “I am ready to sign up again,” co-driver Bryan Garvey smiled. There are some ASO officials surprised that they made it back to Buenos Aires, but take a bow on the podium they did!

Today’s stage win was taken by Robby Gordon who couldn’t wait for the champagne to celebrate and did donuts on the motorway. (Video here https://www.facebook.com/racedezertcom)

I am more tired than I have ever been in my life and I was just press in the back of a car, so I can’t imagine how some of the drivers must feel. With plenty of highs and lows, tragedy and triumph, determination and heart-break another Dakar draws to a close. The cars are going over the podium but after spending two weeks watching them race in some of the most spectacular places on earth I can skip that to get a few extra hours of sleep!

Congratulations to Nasser Al-Attiyah for making the 2015 Dakar his own, to all that took the fight to him, to those that make it to the end, for those who tried and for those who started. I’ll see you all next year. To quote a wise man, I am ready to sign up again! 10 days to chill out in Buenos Aires and then it’s off to King of the Hammers. You are welcome to join me there!

I need to say thank you to Benediktas Vanagas for giving me this amazing opportunity, to Gedmus for keeping me sane in the back of the Land Cruiser, for Carlos for looking after us all and for anyone who read anything I wrote! Thanks to you for following me around South America these last two weeks.