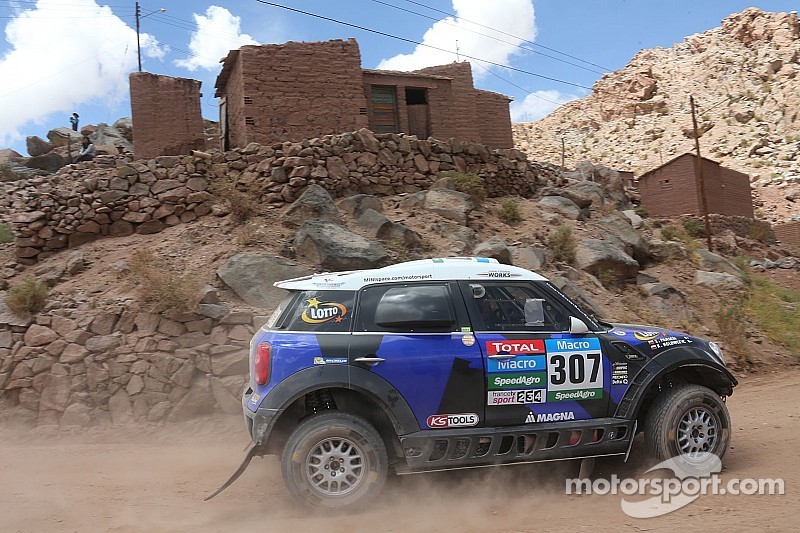 We head into another stage at Dakar with Robb.

After a few days down in Iquequi the air back up in the foothills of the Andes feels crisp and fresh. It was a civilised start time too as the start of the stage was only 36km out of town. The track looked like it had been used a few times before as the surface had been stripped bare down to the rough looking rocks underneath, maybe by the big tyres and drafts of the trucks.

After his stage win the day before the rest day Saudi Arabia’s Yazeed Al-Rahji was first away, his first experience of opening a Dakar stage, and at 450km a very big one to open! Locked into their intense battle for the lead Nasser Al Attiyah and Giles de Villiers came through separated by the three minute interval, both behind a slower Orlando Terranova. Slowest of them all though was Robby Gordon as maybe there is something wrong with the engine again. At the end of the marathon stage he had oil pressure problems. He came by not pushing it over a couple of thousand of revs.

Doing much better than expected seeing as his left arm, the one that holds the steering wheel while the other one changes gear, is broken, was Belediktas Vanagas. We were standing about 2km into the stage though, so there were only 448 to go!

After 10 days Gedmus and I can tell which engine sound is for which cars. The Mini’s are unspectacularly quiet, the Toyota’s have that beautiful roar of a high revving V8 and if we heard a chattering growl and wonder ‘What the heck is that?’ it’s normally a Peugeot.

Further on the course crossed the main road at a time control at the end of a kilometre long straight. We caught the latter half of the Top 15 or 20, the last of the MINIs and some MD buggies. Stephane Henrad in the VW Buggy was going exceptionally well… but unfortunately our guy Benediktas Vanagas wasn’t. An email from Lithuania sent to the Chilean desert told us that he was off the road and the front of the car was smashed. I hoped that he hadn’t hurt his arm any more.

For a better photo I walked away from the main road into a truly bizarre landscape. It looked like it was a big salt lake but the surface was all rough and churned up like it had been ploughed. Endless fist sized lumps of salt have been weathered into strange twisted shapes but from all around it crackles… like I’d just put milk on my Rice Crispies. Very strange. So weird in fact that according the GPS map it was a national park!

Bernard Ten Brinke in the 315 Toyot must have had a problem and was trying to make up time because he was absolutely tearing along the track and then I had the privilege of standing 10 metres away from the leading Kamaz as it barrelled along, clattering like a turbo-charged Victorian printing press.

I saw American Bryan Garvey in the No 430 Buggy again, although instead of waving they should have been looking for one of the Kamazs looming up in the mirror. Oh, and they didn’t just change the body work yesterday to make it pretty, it fell off somewhere in Bolivia.

Benediktas came through near the tail end of the field with a sizeable chunk of the front missing, including one of the Wilderness Lighting stickers I spent my last evening in Iquequi getting printed. The lights themselves were still working fine! Once he’d passed we were back in the car for the short little 300km jaunt to the next bivouac with me and Gedmus writing and sorting out photos, me listening to Black Sabbath (yes, the Tony Martin era. Bite me!), and looking at the distant plumes of dust being kicked up over the desert.

A few hundred kilometres of mountainy desert landscape later and in a narrow, dusty valley we pulled up and waited for the black Hi-Lux. It was a long wait. Backmarkers came in one by one, a few bikers and some trucks and then with a Lithuanian exclamation of happiness Benediktas pulled up to the stop control. He wasn’t celebrating though and was slumped in his seat, last reserves of energy and pain tolerance used up to get him to the finish. And it wasn’t a weak grip on the steering wheel that caused the crash, like we suspected, but someone reversing flat out from a sandpit.

Of course, it was very late when we got into camp, just in time to see a stunning Andean sunset outside of the mining city of Calama. The printed out provisional leaderboard looks very interesting with the gap that had been pegged at under 10 minutes for a long time now opened out to over 20, but unfortunately I have no idea why. Everyone from both X-Raid and Overdrive had already gone off to get some well-deserved sleep in some nearby hotels. (Apparently I had the room next to Robby Gordon last night, but he wasn’t a rowdy neighbour.)

I did manage to find the lovely Cecile from Peugeot and found out that Stephane Peterhansel’s poor time today was due to a broken rear hub that meant there was no drive. There were many positives to take form the day for a team on an extensive and high-profile testing exercise though. Co-driver jean-Paul Cottret managed to fix it with just the tools they had in the car and at the 8th out of 9 waypoints they were running just 38 seconds behind the leader. Also, Cyril Depres got his best result of the event with a possible 9th once some people are given penalties.

After getting my passport stamped again I found a very dusty Bryan Garvey in the canteen and caught up on the last few days of exploits. If the marathon stage wasn’t hard enough already they did the whole two days without a clutch! “It was hard to concentrate because there was no way we could get into reverse so if we went off that would be it,” said driver Antonio Hasbun “And 6km of the stage was up a river and it was freeeezing!” Byran added. Today they were doing very well until they got stuck on a dune. “We had some traction and were about to reverse out but then someone banged into the back of us and we were both stuck. So we had to get out and dig them out and then they pulled us out. That took an hour, but we were doing really well before that.” The time sheets say that they still came in a respectable 40th.
I also need to say a huge thank you to their chase crew who gave a sandwich to a starving Welshman at the finish line! That was magic, guys!

As Benediktas staggered up the ladder to sleep in a roof tent on top of the service truck Gedmus asked, “So what about tomorrow? Are you still going?” “Of course,” was the barely audible answer. It’s good that after a week and a half of the Dakar I can still be surprised and impressed. Despite the drama he came in 45th today, dropping down to 24th overall.

And in the hotel I have wifi… so if this is your only daily Dakar update, de VIlliers had trouble looking for a WP in the dust and has basically conceded the event, Al-Rajhi lost all of his brakes and drove 250km with practically no stopping power and lost 27 minutes but is still ahead of Krzysztof Kolowczyc by over an hour, and despite starting off slow Robby Gordon sped up in the rest of the stage to take 8th.

Tomorrow we cross the Andes again back into the internet black hole of Argentina so we can only keep our fingers crossed that we can find a petrol station with wifi in the evening.