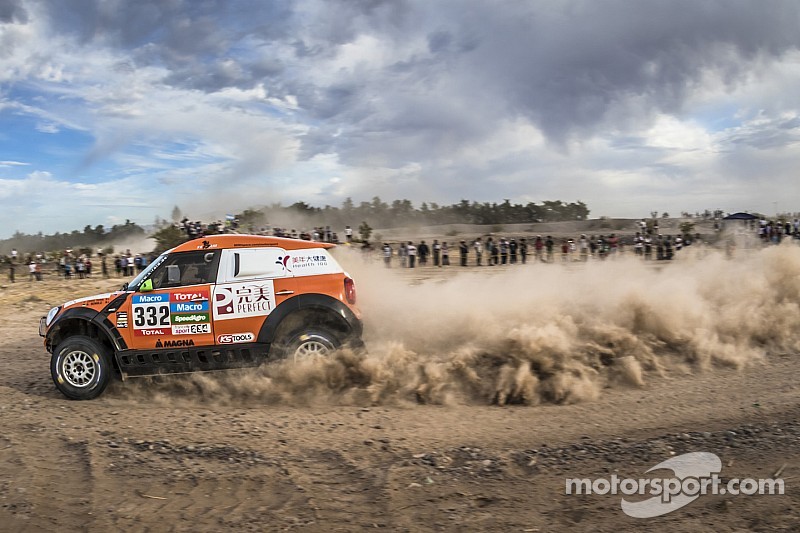 We continue with Robb into the third stage of Dakar.

A short prologue and the longest stage of the rally done it should be a rhythm that the drivers are looking to settle into now. If we were expecting to see anyone taking it easy though, we were mistaken. For the top guys the Dakar is a marathon sprint!

Many people in the campsite would have been kept awake by the sounds of generators and the plaintive cries of mechanics as they realised the futility of their repair efforts. Me, I was kept awake by a peacock crying to the stars. Such is the price you pay for staying in a 5* hotel!

The landscape has changed from the anonymous plains of central Argentina to the most epic desert mountains that put me in mind of Utah or Death Valley. A dirt road over a range of mountains that would have kept a geologist entertained for hours and we came to the special stage where is crossed two fords and a patch of fesh fesh.

The TV helicopter announced the imminent arrival and with the angry vacuum cleaner sound of a MINI at full tilt Nasser Al-Attiyah came into view. No testing the depth of the water, just flat out through it giving a couple of camermen a free shower. With pedal hard to the floor, 90 seconds behind. South African Giles de Villiers was in serious pursuit of the MINI and on corrected time should have been in the lead at that point.

We had the start order list but Bernard Ten Brinke didn’t come by next. It was the Saudi driver Yazeed Al Rajhi in his Overdrive Toyota, some 14 ½ mins behind. Then the 2nd MINI of KH came but was noticeably slower than those in front… and the same with Carlos Sainz in the Peugeot 3008DKR. It just wasn’t getting the power down and didn’t seem to have any power.

Eric Van Loon in his MINI took the water crossing so slow that he got booed by the crowd and then Ten Brink passed but with some heavy damage to the front of his Toyota. Going all out was Vladimir Vasiliev but he was a long way behind so he must have had some problems.

Someone else with problems was Robby Gordon again. By my rough estimation he was an hour and a half behind and going very slow. The T2 production class Land Cruiser of Japan’s Jun Mitsuhashi was following him. Biggest cheer of the entire field wasn’t reserved for the bright orange Gordini though but the VW bug of Stephane Henrad.

Then … but back at camp it was the usual hive of friendly activity. I wanted another road trip and a fruitless hunt through random desert villages for wifi to the X-Raid camp to talk to the drivers but they had already gone to their hotels. The friendly Pole Krzysztof Holowczyc was still around and had a few minutes. I thought that he was driving slowly and that was because he’s broken the rear prop shaft and did 120km of the stage with only front wheel drive. “We started quite smoothly but passed Ten Brinke who’d rolled so we started to go a little easier… but we have a saying in Poland about almost having the bird in your hand as the rear diff went. On the fast tracks the car handed terribly and on accelerating I had to be careful because all of the power was going through the front but we continued. Near the end of the stage there was a lot of fesh fesh and we were worried about it but it was actually quite funny because we kept going in 2wd while Vasiliev was stuck even though he had 4x4! In the end we were very lucky that we only lost 18 minutes. It could have been a lot worse.”

Back in Overdrive, shoulders freshly relaxed, I finally caught up with Mark Powell. I like to follow the real people stories and this is one. He spent a couple of days thinking about the offer of driving the Orlen team press car but on New Years eve got the call up to be a full co-driver… so had three days to get ready! I have two trip, two GPS computers in front of me and a roadbook bouncing around in front of me and trying to get all of them in some sort if unison is quite a task. So hard in fact that in future I have decided that I will go a bit easier on my co-drivers! The first two days were a massive learning curve but we made quite a mistake today when we overshoot a turn and an official pointed us off the wrong way. It was 10km before we realised, so we lost quite a bit of time with that. But we’re still going well, and Marek Dabrowski is a really good driver!”

Yesterday Mark and Marek were the ones who stopped to give Stephane Peterhansel a bump start.

Featured driver Benediktas Vanagas also had a rather eventful day. The thick dust of the opening stage set them back a little so they are spending a lot of the stages in other’s dust driving at 50% throttle. “Today we caught Sven Schott after just 4 minutes and had to spend the next 30km waiting behind him trying to find a way by. It was a rough stage, part of it we were racing up a river bed full of rocks. We got a puncture but one of the stones must hve ricocheted in a funny way and cut a brake line… so we did almost 200km of the stage with no brakes. A couple of times we fell off the track but actually I would say that the main problem again was the dust. In the 300km I think we were in dust for about 50 or 60km… so in the end I am not so disappointed that we finished 22nd. What I hope to do in the next few days is get into the top 20, maybe even 15 because then you have faster cars around you with bigger gaps between them at the start.” Starting 39th and aiming for the Top 10 he’s half way there already.

Next door to Benediktas is one of the most popular cars in the event. Al-Attiyah got a cheer, Robby Gordon would have got a much bigger one if he’d gone faster through the river crossing but getting the biggest shouts of encouragement in the whole field was Stephane Henrad’s VW Beetle! “We are two friends and my co-driver has no experience of the Dakar so we are here for fun… which is actually the spirit of the car. We have two targets. Fun and a good balance between performance and cost. The car is small and light, probably the lightest 2 seater here so in the dunes we hope it will be a pleasure.”

And the 353 number on the side is no coincidence. “When I was a kid Herbie was my hero!”

Brain Garvey’s wife sent a few messages as we were driving through the stunning desert mountain landscape today. After going through a grand total of 6 tyres the team got properly bogged down in the fesh fesh and were digging the car out until the early hours. They got to the end and texted home at 3:30 am. A couple of hours sleep before heading out to the next stage! They send a photo full of smiles home too. Heros!

Orlen Team Buggy burnt to a crisp at Dakar