Price's roadbook tore in half during Dakar opener 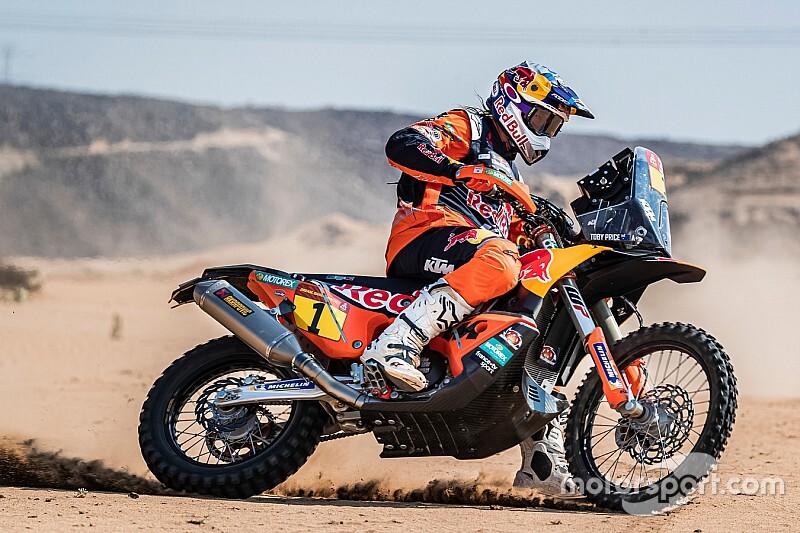 Factory KTM rider Toby Price has revealed that his roadbook tore in half on the opening stage of the Dakar Rally, as he was forced to follow teammate Matthias Walkner.

Reigning Dakar champion Price topped the first stage of the 2020 event, the first to be held in Saudi Arabia, narrowly beating Honda rider Ricky Brabec by 2m05s after 319km of running.

The Australian trailed early leader Brabec for about first-third of the distance, before surging ahead and retaining the position till the finish line.

However, the 32-year-old admitted that it wasn’t all “smooth sailing” after his roadbook got jammed inside the holder, before breaking up into two parts.

“Something broke, it was getting the roadbook locked up, I couldn't roll my notes around, was getting quite frustrated with that,” Price told Motorsport.com.

“So was not as smooth sailing as I would have liked. But I fortunately then had Matthias Walkner get a little off track, I got on behind him and then could stop playing with the roadbooks so much.

“We just kind of followed him a little bit more but by about the 250km mark, the roadbook actually tore in half. Something was in there and it jammed it all up and the paper tore. So not the greatest but we made it work.”

As a new measure for 2020, roadbooks for six of the 12 stages will be handed to riders 25 minutes before the start of the stage in question - as opposed to the afternoon of the day prior.

The new philosophy, championed by new Dakar director David Castera, will be implemented for the first time on Monday’s Stage 2 - and Price admits that it has got “everyone a little nervous.”

He added: “Hopefully we’ll make a good day of it, but if not, if it goes terribly, I’m going to be hating on getting the roadbook in the morning and everything else.

“But it’s what the rally life is all like and that’s what it's about. But it’s good to be here and so far so good with the desert and the backdrop.“

Alonso "on tiptoes" in first stages of Dakar debut