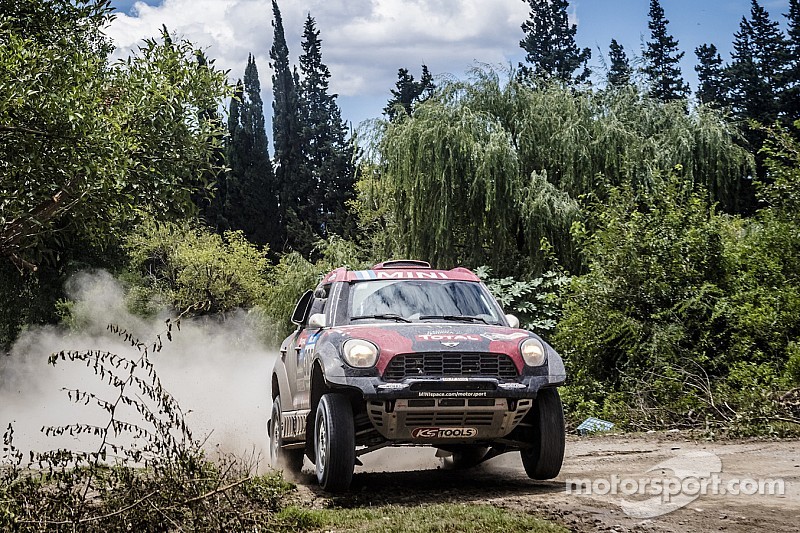 Orlando Terranova's victory this Friday will not change the course of the rally.

Quick and consistent since the start in Buenos Aires, Toby Price has kept on progressing as he has acquired experience on his first Dakar. The Australian rookie, winner of his first stage in Rosario today and a solid third in the general standings, is one of the revelations of the 2015 edition. Orlando Terranova is already well respected among the leading lights of the car category and picks up a fourth stage victory.

In the top 5 seven times since the start, Toby Price did not have much time left to pick up a possible first success on the Dakar. The Holy Grail for every debutant, already obtained by Matthias Walkner earlier on in the rally, finally fell into the grasp of the KTM rider on a penultimate stage of the rally that he led from start to finish. Far from lowering the pace after 12 days of racing, the Australian in fact put on a show of force on the road to Rosario by reaching all the time check points in the lead, to consolidate his superb third place in the general standings. He is even not too far (25 minutes) from rally leader Marc Coma, who will have to keep a watchful eye on this newcomer to the rally-raid elite.

Joan Barreda already belongs to this elite and the Honda rider proved it again on Friday. Second to finish, 1'55'' behind the winner, the Spaniard played the role of opener with panache. Paulo Gonçalves also again displayed his fine skills with the day's third best time, but it was insufficient, however, to worry Marc Coma, who contented himself with managing his lead in the general standings. In sixth place, 6'25'' behind Price, the official KTM leader did not take any risks and looks to be heading comfortably to his fifth outright triumph on the Dakar. He was even beaten today by a Slovakian duo in form at the end of this second week of rallying with the 4th place for Ivan Jakes and 5th for Stefan Svitko. Pablo Quintanilla lost ten minutes to Price, meaning the final podium is slipping away from his grasp.

Already a winner on Thursday, Christophe Declerck has been on fire at the end of the rally and picked up his second consecutive victory, once again in impressive fashion. Untouchable on the tracks to Rosario, the Frenchman was ultra-dominant on the day's special and finished with a lead of more than seven minutes over Nelson Sanabria. Rafal Sonik finished a cautious fourth ten minutes behind the day's winner and is gently cruising to his first outright triumph on the Dakar.

7 hours behind Nasser Al-Attiyah in the general standings, Orlando Terranova's victory this Friday will not change the course of the rally. However, with three second placed finishes over the last four days, the Argentinean was determined to grab a fourth stage victory in Rosario and achieved his goal with intelligence by waiting in ambush during the whole day before finally pouncing in the last few kilometres when the opportunity presented itself. Obviously, this will fuel his regrets due to a disastrous stage 4, whilst his runner-up today Vladimir Vasilyev has the right to be fully satisfied with his progress.

The Russian, winner of stage 5, was not far from reproducing such a performance, finishing only 30 seconds behind Terranova and especially climbing up to the fifth place in the general standings. As for Emiliano Spataro, he enjoyed his best stage on the Dakar in his Renault Duster with a fine third placed finish, 1'29'' behind the winner and ahead of Nasser Al-Attiyah who made sure of 4th place. The Qatari is now only 393 km from a second title on the Dakar. Giniel De Villiers and Krzysztof Holowczyc will be on the podium with him, unless a last minute incident decies otherwise.

In the truck race, Hans Stacey did not let anybody catch him after starting the special to Rosario first. Following his victory yesterday, he reproduced the same feat to taste triumph again. However, the Dutchman only just beat his two countrymen Marcel Van Vliet and Gerard de Rooy, who finished less than 30 second behind him. The day's fifth placed finisher Airat Mardeev now has a lead of 12'43'' over Eduard Nikolaev in the general standings as final victory draws nearer.

Tom Coronel: "The end is near" - video