KTM rider Toby Price admits he is surprised that his damaged rear tyre held together on Monday's eighth stage of the 2021 Dakar Rally.

The Australian had to complete more than 800 kilometres on one set of rubber over the course of Sunday and Monday across what's known as the 'marathon' stage, on which competitors are not permitted to receive external assistance.

Price suffered a cut on the right side of his rear tyre early on Stage 7, but still successfully navigated the last 300km of the Ha'il-Sakaka test while only losing a little over five minutes to stage winner Ricky Brabec (Honda).

New rules for the 2021 Dakar state that riders can only use six rear tyres for the whole rally, and they cannot be changed during the marathon stage without incurring a 30-minute penalty - something that would have almost certainly been fatal to Price's hopes of a third title.

Previously it was common practice for tyres to be shared between teammates on stages where external assistance isn't allowed.

Price instead managed to secure the cut area of the tyre with clamp rings in the Sakaka bivouac on Sunday night, and completed the 375km stage to Neom without any real trouble, dropping just one minute and five seconds to Honda's Jose Ignacio Cornejo. 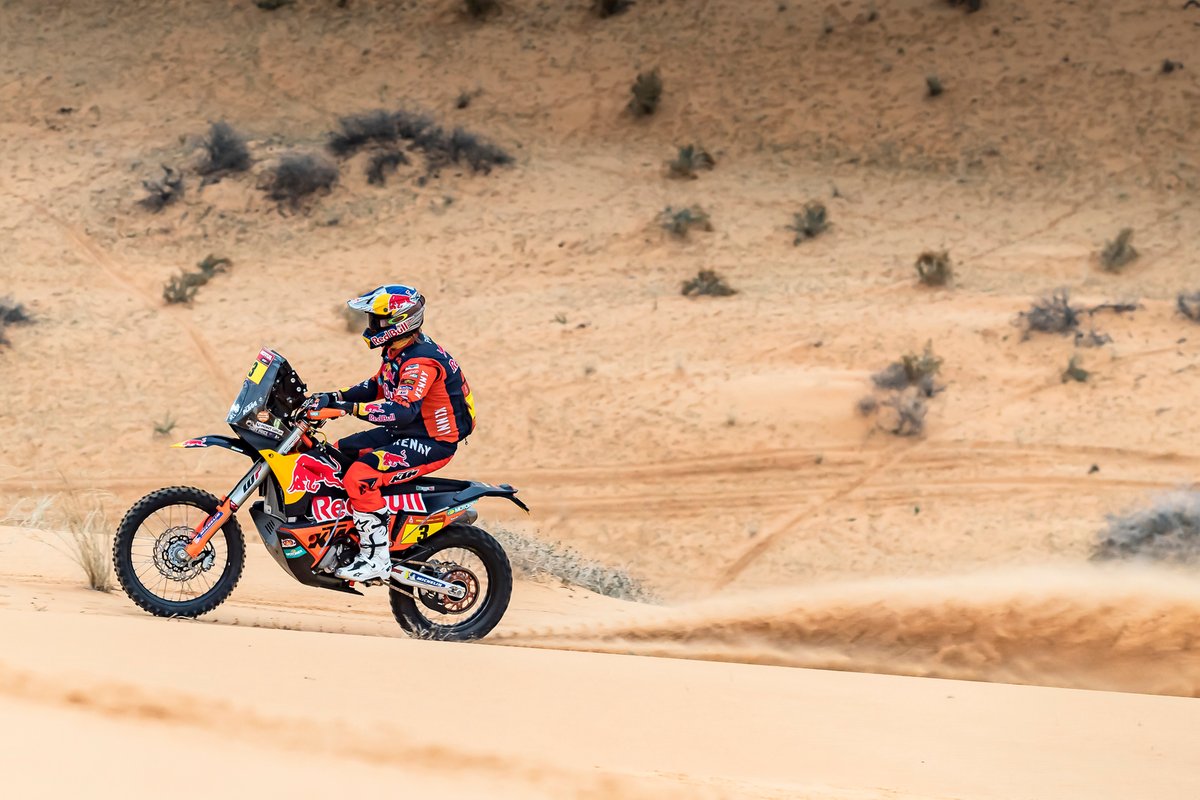 "I am happy to be here today," said Price. "I definitely did not think I'd make [it through] Stage 8. It's been a sleepless night and a stressful day, but all in all we held the tyre together.

"We just tried to keep momentum and not wear the tyre more than we needed to. I'm surprised it made it to the finish line but it shows the quality and what the tyre can do. It's done 800km as it is now, which is pretty remarkable.

"We lost another minute, but in the circumstances we're quite happy. We'll wait and see what the next few days bring, hopefully we can draw it back in."

Price remains second in the overall classification, only 1m06s behind Cornejo and with his teammate Sam Sunderland third, 5m57s from the Chilean Honda rider.

KTM team manager Jordi Viladoms told Motorsport.com: "Obviously, we had no guarantee that the tyre would last until the end, but we had seen that yesterday had made about 300km with that cut in the tyre and that made us think that could also survive today.

"If he took care of the tyre and controlled the pace a little, we knew it could be saved. The repair he made was not much, nor could be done much more. The damage was not serious enough to lose the rally, but it is clear that there was a dose of luck too.

"We had to take a risk because [a penalty of] 30 minutes would have been a lot right now. Luckily, it went well.

"I am very happy for Toby because he is doing a sensational race. It would have been a shame if the tyre had killed his chances. Now there are four days left of being 100 percent focused."