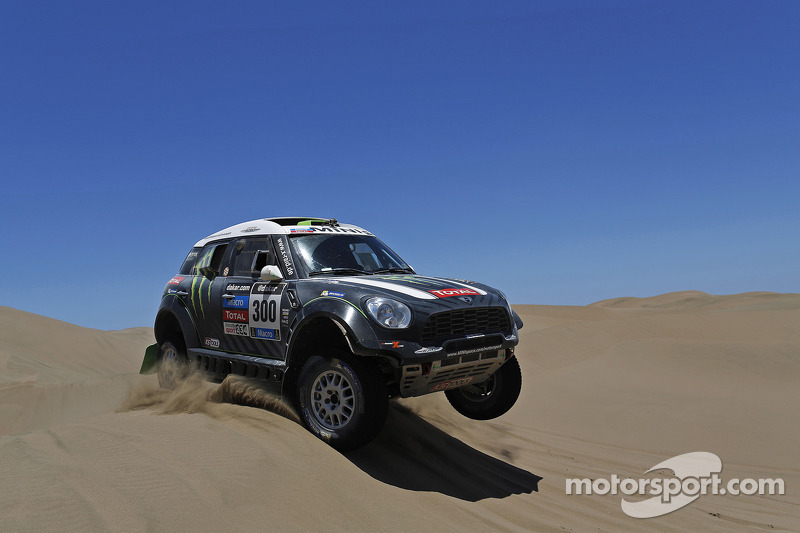 Four MINI ALL4 Racing at the top of the leaderboard

In the ninth stage, from Calama to Iquique, the fight for the win proved to be a battle between Stéphane Peterhansel (FRA) in the black and Nasser Al-Attiyah (QAT) in the white MINI ALL4 Racing. At the end of the 302-kilometre special stage, Peterhansel and Jean-Paul Cottret (FRA) got the upper hand and crossed the finish line 2.27 minutes ahead of Al-Attiyah and Lucas Cruz (ESP). The Spanish-Portuguese pairing Nani Roma / Michel Périn finished third, in the yellow MINI ALL4 Racing, thus defending the overall lead. The orange MINI ALL4 Racing, raced by Orlando Terranova (ARG) and Paulo Fiúza (POR), finished fourth. Thanks to their results, both Al-Attiyah and Terranova passed respectively machted Toyota’s Giniel de Villiers in the overall standings. This means that the first four positions on the leaderboard now are held by MINI ALL4 Racing. And Krzysztof Holowczyc (POL) / Konstantin Zhiltsov (RUS) with the red MINI ALL4 Racing follow in seventh position. 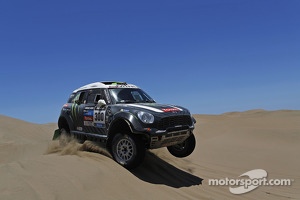 From the beginning of the stage to Iquique, Peterhansel and Al-Attiyah battled it out for the stage win. The Frenchman quickly closed in on his team-mate from Qatar and followed him for the rest of the stage. ‘In the opening stages, the track was rather smashed and, consequently, dangerous. We encountered a hard landing but the MINI is an extremely solid car – really incredible,” revealed the Frenchman. On the way from the huge dune down to the finish, however, he still doesn’t feel really comfortable. “I still don’t dare to go flat out, there,” he admitted. “Somewhere in me there is a voice that says: ‘No, don’t do it’!”

Al-Attiyah was the first to start into today’s special stage and had to act as pathfinder throughout the stage. “Doing so is not too easy and we several times got lost for a short time,” revealed the driver from Qatar. “Furthermore, Stéphane was pushing rather hard. But we now hold fourth position in the overall standings and will try to work our way up to third.” Al-Attiyah’s gap to the leaders now adds up to about an hour but he lies just about five minutes behind Terranova.

Meanwhile, Roma once again tried to contest the stage without taking unnecessary risks or making any mistakes. But he still wasn’t able to fully get over yesterday’s puncture. “In the opening stages I therefore wasn’t able to really go for it but later, I felt better and was able to push,” the Catalan admitted. He is aware that his team-mate is an extremely competitive opponent. “Stéphane delivered in extremely fine style, today. I know that he is very fast on this kind of tracks.” As Roma got stuck for a short time, in the closing stages, he crossed the finish line 11:36 minutes behind Peterhansel. Nonetheless, he defended his first place in the overall standings and holds a 12:10-minute lead over the Frenchman.

Terranova held third position nearly throughout the special stage but with just 20 more kilometres to go he lost valuable time. “In the dunes, one of our tyres slipped off the wheel and changing it wasn’t too easy,” said the Argentinean. “But it’s good that we are back in third position, now. The rally isn’t over, yet, and just in this Dakar, anything can happen.”

Holowczyc lost some time but he partially did so as he waited for Roma, after the start, to be able to help him if necessary. I followed him and then, we unfortunately suffered a puncture,” revealed the Pole. “Then, however, things went really well for us – until we arrived at the dunes. There we got stuck in a hole and this incident cost us some 15 minutes. Due to a technical failure encountered by Carlos Sainz, Holowczyc now holds sixth place in the overall rankings.

The 10th stage, contested tomorrow, once again comprises a two-part special stage with a 231-kilometre and a 215-kilometre part. The drivers will have to battle their way through sand as early as during the first 100 kilometres but afterwards, the track surface will be harder. The second part features several fesh-fesh sections to end on winding tracks.