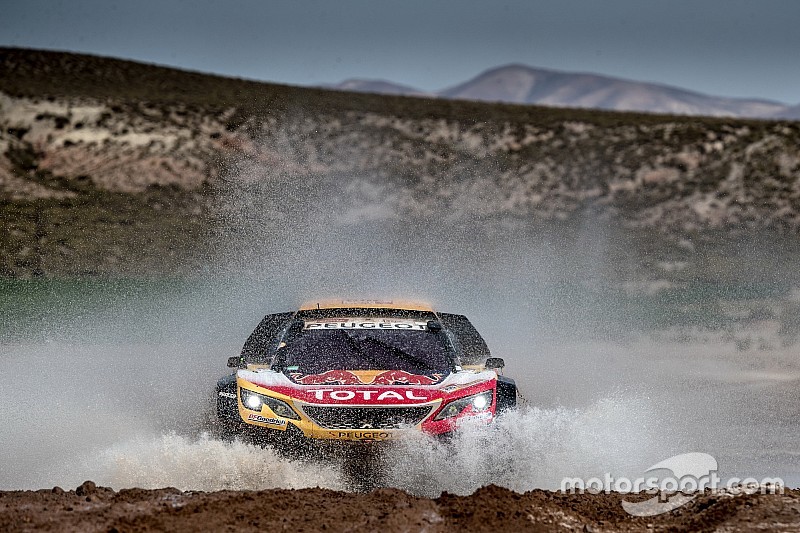 Stephane Peterhansel has given up on winning a 14th Dakar title, conceding that Peugeot teammate Carlos Sainz can't be caught over the final three stages.

Peterhansel looked set to add to his remarkable tally of Dakar wins at the end of the first week, sitting a comfortable 27 minutes clear of Sainz heading into the La Paz – Uyuni stage.

However that seventh day of running proved to be a turning point for Peterhansel, his Peugeot buggy sustaining serious suspension damage while avoiding a stranded quad.

After having to wait for teammate Cyril Despres to provide support and parts, Peterhansel dropped backed to third outright, an hour and 20 minutes behind new leader Sainz.

Peterhansel has since won a pair of stages and moved back to second in the standings. However, with Sainz more than an hour ahead thanks to having his 10-minute penalty rescinded, the Frenchman says he's given up his chase and would need to rely on a mechanical failure to win from here.

"Yeah, sure," he said when asked if Carlos was too far ahead with three stages remaining.

"We have the same car, we are professionals – so to catch Carlos is really not possible. But you never know; this is a mechanical sport, so you never know.

"I'll just defend my place because Nasser [Al-Attiyah] is only 20 minutes behind me. To try and take one hour in three stages is not possible, especially as the next stages are not dunes.