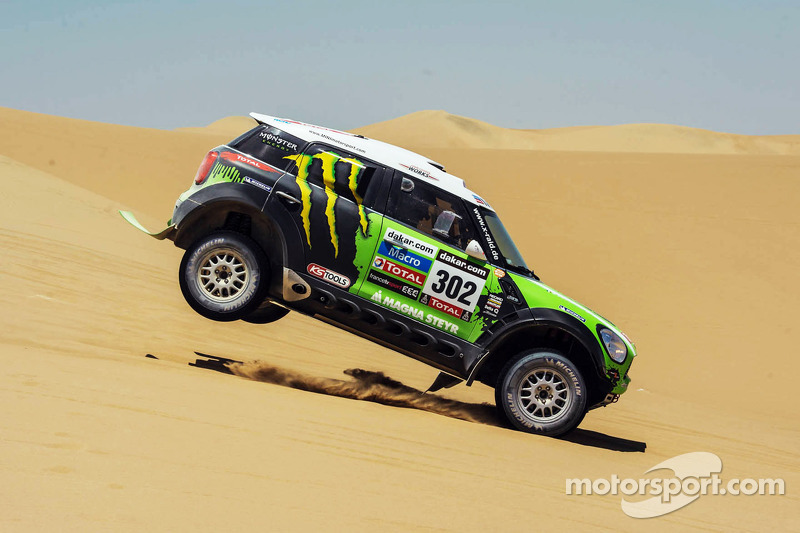 Stage 2 was a loop around Pisco in Peru, and the one where the Dakar 2013 competitors faced the sand dunes! After an 85 km liaison section, the 242 km special was their first test on the sea of sand.

The Pisco loop gave a peek to the riders and drivers of what is to come in this year’s Dakar rally-raid. It was their first test on the sand dunes after the short special yesterday that took them from Lima to Pisco. Today the 242 km special in Peru is one they will look back on as being easier than what they will yet face on Monday.

It was not really a surprise to discover that the X-raid Mini team’s Stéphane Peterhansel and co-driver Jean-Paul Cottret moved into the Car category overall lead by grabbing the win on the second stage. The Frenchman accomplished another feat today when he landed his 60th Dakar victory – counting his wins in the Bike classification!

“We had a good stage, mainly thanks to navigation. We're fast, and we've got the potential to go even faster, but it was mostly Jean-Paul's navigation which saved the day, nothing else,” Peterhansel said. 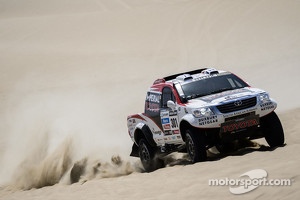 The top five on the stage are also the top five overall. Two minutes and 38 seconds off the pace of the Frenchman in the standings was Giniel de Villiers. The South African placed his Toyota second followed by Ronan Chabot in a SMG buggy. Fourth went to Orlando Terranova in his BMW X3 ahead of Leonid Novitskiy in another of the Minis that aim for the 2013 victory.

In the Bike classification, Joan Barredo took the top spot after a dominating performance on his Husqvarna. Over five seconds off the overall pace was Ruben Faria who placed fourth in today’s stage on his KTM. Juan Pedrero was second in the stage, and now sits third in standings on his KTM. Adding to the delight of the Husqvarna team was Australian’s Matt Fish who finished third which places him sixth overall. Fifth in today’s special was KTM rider Kurt Caselli which was a good showing for the American. However for the overall picture, fourth belongs to David Casteu on his Yamaha.

Barredo commented: "I got lost at the beginning of the stage. But I wasn't the only one who needed some time to find his bearings. I quickly got back on track and everything went smoothly from then on. It was a great day at the office."

Both Cyril Despres and stage 1 winner, Francisco “Chaleco” Lopez, had navigational errors. Today was not one they want to remember as it did cost them dearly. Despres lost eight minutes and now holds fifth in the overall while Lopez is back in 20th. 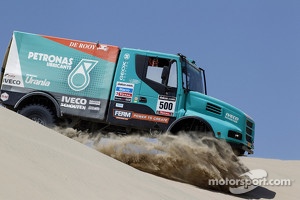 Gerard De Rooy and his Iveco giant truck took a back-to-back stage victory. The overall leader of the Truck category did not have much to cheer about when the De Rooy team considered the fact that their second Iveco with Hans Stacey at the wheel tipped over. However they also had good news with Miki Biasion in third.

“A beautiful special which I think was designed with the trucks in mind, because it had nice dunes and we had loads of fun despite a few tricky moments during the descents. Unfortunately, we lost about 10 minutes looking for a waypoint until we finally found it as we went by a dune. Anyway, I'm quite happy, especially because we were able to drive flat out in the last few kilometres... Broadly speaking, everything went well,” said De Rooy who holds the overall lead heading into the third stage by just over two minutes.

Second in the overall was second on today’s special stage. Ales Loprais and his team will hope to place the Tatra first tomorrow as he said, “Although today's special was short, it was extremely difficult, and I didn't expect this on the second day of racing. Anyway, we'll just keep attacking and hanging on.”

The hotly-contested Quad classification has a lot of local interest with favorites from Argentina, Chile and Peru. Stage two sand dunes were exactly what Marcos Patronelli was looking forward to – he aced it and moved to the top of the Quad standings. However, he will need to keep his eye on Sebastian Husseini who now has two second place finishes, and more importantly is only 46 seconds out of taking the lead. Patronelli is on a Yamaha while Honda is the choice of Husseini.

"The stage was fast. Very beautiful. But also dangerous. Everything went well,” said Patronelli. “It was a good day. I'm very happy."

Tomorrow will take both driving and navigational skills as the difficulty heats up on the route from Pisco to Nazca Monday’s stage three from Pisco to Nazca with a 243 km special stage across the sea of sand before the second part where they will have the view of the coastline -- along with a few special tricks!