What the riders and drivers had to say after the challenge on the 4th stage of Dakar 2013.

013 - Gerard FARRES GUELL “I'm happy, very happy especially after the problems I had on the first day. Yesterday, I already had a good day and today I was able to get into the leading group and ride with Gonçalves, Cyril and the others. It's important for me because I'm feeling good and learning a lot by being with them. I'm going to continue like that, taking each day as it comes, hitting the gas when it's possible and hoping that it all turns out alright”. 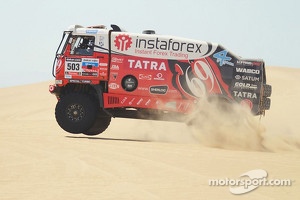 005 - Joan BARREDA BORT "After a bad day yesterday, when I broke the spokes of my wheel and lost heaps of time, I rode very well today. I started from far back and was able to go on the attack from the beginning to the end. Nothing is lost yet, so I'm going to fight every day to move back to the front."

009 - Olivier PAIN "I caught up with the group towards the end of the special because they strayed a bit off track and, being behind them, at the top of the valley, I was able to take the shortest route and make up a lot of time. I've been riding at my pace from the beginning, with no pressure, just to have fun, and doing my best not to fall because the rally's just begun. I don't want to get overexcited about my place in the overall, the rally's still long and my objective is to finish in the Top 10 every day, and I hope to continue doing this well until the end."

001 - Cyril DESPRES "Chaleco rode quite strongly at the beginning of the special, but I caught up with him and then turned on the afterburners. It was a bit of a déjà-vu with yesterday and the day before yesterday. I later backed off a bit and those who started further back seized the opportunity to gain some time. It's not the first time this happens, but don't worry about me, I'm racing my way. I've been riding at a high pace for three days, but not flat out, which helps me to save energy and avoid pushing the motorcycle to the limit. When you start at the back and go like crazy all day long, you ride in the dust, so if you later have mechanical problems, it won't be down to just bad luck... The rally's still long and I ride at my pace!"

250 - Marcos PATRONELLI “It really was a difficult stage, quite complicated especially when we had the sun in our faces. There was also lots of fesh-fesh. It was difficult. But it was such a beautiful stage, I'd almost like to come back here! The big descent was wonderful, very long. At times the stage was really magnificent. There was a ten-kilometre section alongside the beach, which was nice too. After that, there were lots of little tracks that were very rocky and the quad was bouncing from side to side. In the end, it was a tiring stage and now there is a long way to get to the bivouac”.

265 - Sebastian HUSSEINI "The stage started really nicely. We started in the dunes and sand and everything was going well. Then we had a really tight and rocky track that went really high up into the mountains. I misjudged a corner and landed one of my tyres on a rock and had a puncture, so I lost a good ten minutes repairing my tyre. After that, we got back into the sand and we had this beautiful section along the beach. I think I was able to catch some time back. But, you know, it's still early. We're having fun, I'm enjoying it and it's going well”.

300 - Nasser AL-ATTIYAH "They were not easy dunes and it was very difficult to open the road, but we are so happy to finish today without any problems or mistakes, so I am really quite happy. Tomorrow I don't think it will be difficult. Maybe we will lose a bit of time, but I think tomorrow it doesn't matter if we lose a little or not because I will try and keep it tight until we cross into Chile. Chile will be good for our car. I'm so happy to be close to Peterhansel. Today we did a good job and Lukas did a good job. The car is working very well and I'm quite happy”.

309 - Guerlain CHICHERIT “It was a really, really amazing day. We were close to winning the stage. Today we had a lot of dust and it wasn't easy to overtake other cars, but at the end the result is really not too bad. For tomorrow we will start second on the road so we really are in a perfect position to try to win the stage tomorrow, to try and win our first stage with that car also. So, we'll see tomorrow”.

302 - Stéphane PETERHANSEL "For the moment, we're just focused on our position, avoiding making navigation errors or driving mistakes and we haven't had any technical problems with the car, so it's going really well. What's more, we've seen one more of our rivals fall by the wayside today. After Holowczyc yesterday, Gordon eliminated himself from the battle for victory today. I don't want to end up in the same situation as those drivers, so I prefer to hold back a little. It's always a question of strategy: you need to know when to keep a little back and when to take risks. For the moment, it's not going too badly for us”.

305 - Joan (Nani) ROMA "It was a very complicated stage, with very difficult dunes at the start, so we didn't do too badly and avoided any major mistakes. We stopped to check something on our rear and Guerlain overtook us. After that, we were stuck behind him in a section that really wasn't good for buggies, so we lost quite a lot of time there… But, we've got to the finishing line, that's the main thing…”

315 - Robby GORDON "We started off second and we got through some really gnarly, silty stuff. We went over a dune and it was just straight down with one right end to it. We idled into it just enough to tip us over the front, honestly, five miles an hour probably, it wasn't a big rollover. Except it put all the weight of the vehicle on the front, broke the windshield and flopped it on its roof and we had to wait for new radiators to get to us. It was a long wait. It's been a disappointing rally for us; we expected so much more. The first day I was too conservative and this dune I went over just a little too much, so we can't find a happy medium I guess. The rollover was honestly five miles an hour. It stood on the top for a while and I thought it was going to come backwards, but it just flopped over. It wasn't that dangerous except for the fact that we were on the other side of the dune. It was probably five to seven minutes before Peterhansel got there, so we'd already put some gap on him, but that doesn't do us any good now. You know, we just needed to have a good day today. I don't know what's going wrong… Like I said, we've just had a horrible rally so far this year. I don't see a bright side coming, because it's going to be a long ten days. Last year we were so good most of the rally and this year we started off conservatively like I did last year and it's just been unfortunate. We haven't been able to put it all together. We've got the team, we've got the cars, but I guess the drivers are making mistakes. It's just unfortunate. I think we're going to have sit back and see if it really makes sense to continue or not."

503 - Ales LOPRAIS "We also had a big problem because 100 km before the finish my front suspension broke. I had an oil leak so we really had to slow down. The two Kamaz trucks passed us so I was praying just to finish the stage. I was stroking the steering wheel saying 'You have to survive, my lady'... I'm really happy we are here because if the stage was longer by one kilometre or ten or fifteen it would have been over because the front suspension is broken. So, we have to repair it and today we were really on the limits, but that is the Dakar."

505 - Ayrat MARDEEV “It was a very interesting special, with sand, rocks and a track that was sometimes wound around a lot. At the start we overtook Pieter Versluis and after that we saw Miki Biaision's truck on its side. Then we overtook Loprais. In the mountains, we saw De Rooy, but he was heading in the other direction. Over the whole day, we didn't have any mechanical problems or navigation problems and we only lost a tiny bit of time on a tricky part with ruts on it. In general, it was a superb special stage”.

The eight stage is done for the Instaforex Loprais Team