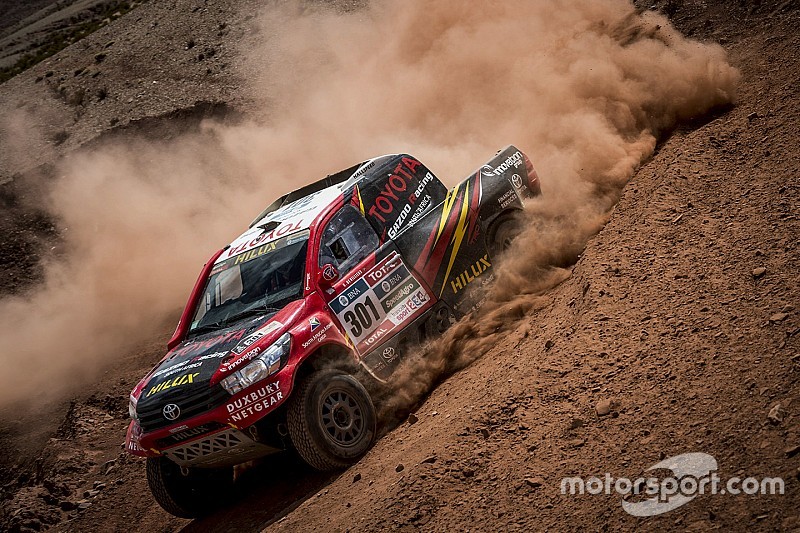 Salta (Argentina): Overdrive Racing and Toyota Gazoo Racing South Africa have four cars inside the top 10 and seven of their eight cars still in the running and challenging for honours after the first week of an enthralling Dakar Rally, held in appalling weather conditions, in South America.

With six of the event’s 13 special stages still to run in Argentina this week before the finish in Rosario on Saturday, Toyota Hiluxes hold sixth, seventh, eighth, ninth, 18th, 19th and 66th in the overall classification at the rally’s traditional rest day at Salta in northern Argentina. Their positions are testament to the strength and reliability of the V8-engined Toyotas in the world’s most difficult rally.

Former Dakar winner Giniel de Villiers and his German co-driver Dirk von Zitzewitz lead the way in sixth place in the first of the three Toyota Gazoo Racing South Africa cars. They were third quickest on the first of the longer special stages through Argentina and remain in touching distance of the leading quintet of drivers heading into the eighth stage on Monday, despite a puncture and minor delays during the first week. After three special stages they had been running as high as second overall.

We are a private team, competing against the official factory teams.

Czech WRC star Martin Prokop has made a solid Dakar debut with Overdrive Racing and co-driver Jan Tomanek. He holds 18th overall at the rest day while the French pairing of Ronan Chabot and Gilles Pillot are 19th in their Overdrive car.

The Polish former enduro-riding duo of Marek Dabrowski and Jacek Czachor are running with backing from Orlen and lost a lot of time earlier in the week with transmission problems. Delays and time penalties before the fourth stage have pushed them down the leader board to 66th overall in Salta, but the car is running well now. Dabrowski, who finished a fine fifth on the Prologue, is determined to climb through the tail-enders over the remaining six Argentinean stages.

There was disappointment for Dutchman Bernhard Ten Brinke and his Belgian navigator Tom Colsoul. The winners of the opening Prologue stage last Saturday were lying eighth as the rally entered Bolivia and had set some impressive stage times during the first few days of competition. But their car caught fire on the special stage around Uyuni and was destroyed.

“The rest day in Salta is a chance for us to rebuild and repair the Toyotas and for the drivers to take a day of rest,” said Overdrive Racing’s CEO Jean-Mac Fortin. “We had eight Hiluxes at the start in Buenos Aires and we have seven of them still running in Salta, despite the unfortunate retirement of Bernhard Ten Brinke. They were just 15km from the finish of the Uyuni stage and suffered a puncture. They tried to lose as little time as possible, but the hot rubber tyre began to burn and the car quickly caught fire.

“We must put our performances into context. We are a private team, competing against the official factory teams. Our cars have progressed well since last year, but it is not easy to compete against teams backed by manufacturers. This is normal but, that said, our cars represent the best quality-performance ratio of them all. Regularly, our drivers are inside the top five on the stages and sometimes even inside the top three.

“Before we start to attack the second half of the Dakar this week, which promises more challenging terrain and tricky navigation, we have four cars inside the top 10. The race is likely to be even more difficult in the coming days. Who knows what will happen over the last six stages, but we can all be proud of our performances so far.”

The first of the remaining six special stages gets underway from Salta on Monday morning and takes crews to the town of Belén, via 393km of competition and liaison sections of 373km.

A short loop stage around Belén follows on Tuesday and then the route begins to head across Argentina, via La Rioja and San Juan, and returns to the town of Villa Carlos Paz. A short final stage on Saturday takes the survivors to the city of Rosario, where the ceremonial finish will take place on Saturday afternoon.