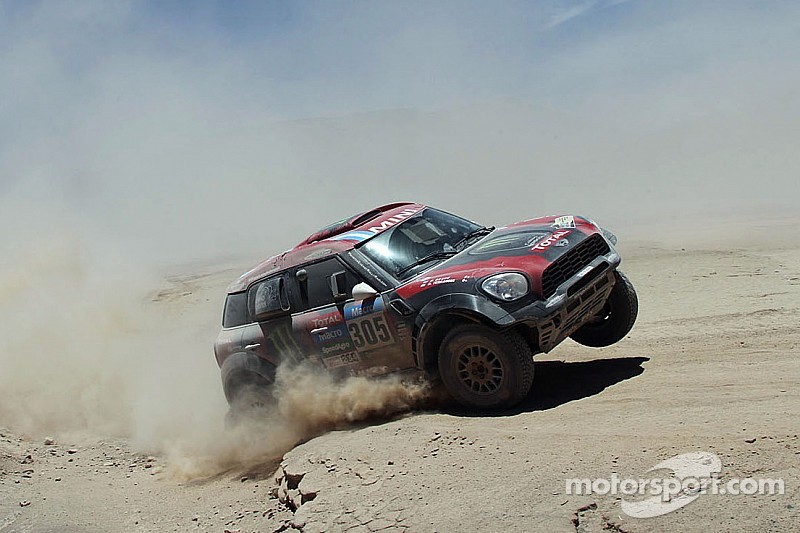 MINI defends its overall lead at the first part of the marathon stages.

On day seven the Dakar route lead from Iquique in Chile to Uyuni in Bolivia. The drivers had to cross a mountain plateau at an altitude of almost 3,900 metres above sea level. The 321 kilometre-long special stage was held on very loose gravel thus being extremely rough on the tires.

Given those circumstances, MINI posted an extremely strong result: Krzysztof Holowczyc/Xavier Panseri (PL/FR) finished the day in fourth position, maintaining their fourth place in the overall classification as well.

Today the drivers had to be extremely careful as today’s and tomorrow’s stage are part of marathon stage. Two stages at which the drivers can’t call upon their support teams. Only three spare tires are allowed to be carried within the car during that time.

Second part of the marathon stages

On Sunday the Dakar will tackle the final stage before the rest day which will also be the second part of the marathon stages. After the short visit to Bolivia the drivers will head back to the city of Iquique at the Pacific Coast in Chile

The drivers will have to cover 784 timed kilometres across the Salar de Uyuni, a dried out salt lake. At an altitude of approximately 3,700 metres above sea level they can put their foot down before descending on twisty mountain roads towards Iquique. Later they will have to tackle the dunes around Iquique again. A tough and eventful day lies ahead.

Terranova shines as De Villiers inches closer to the lead