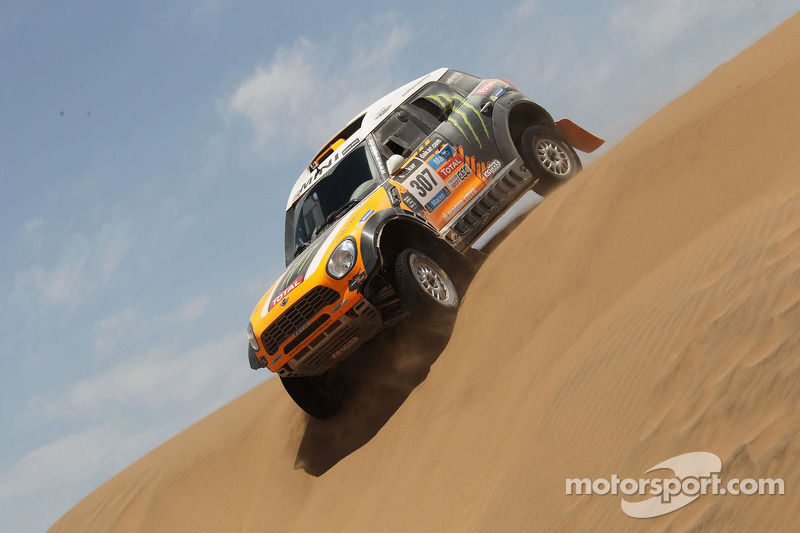 In the antepenultimate stage, from Antofagasta to El Salvador, the Argentinean-Portuguese pairing Orlando Terranova / Paulo Fiúza in the orange MINI All4 Racing celebrated their first stage win in this Dakar. Thanks to this success, they re-passed Giniel de Villiers in the overall standings and worked their way up to fourth position. Catalan Nani Roma and his French navigator Michel Périn, the current leaders, took their yellow MINI ALL4 Racing to second place. The black MINI ALL4 Racing, raced by the French pairing Stéphane Peterhansel / Jean-Paul Cottret, came fourth, with Nasser Al-Attiyah (QAT) / Lucas Cruz (ESP) in the white MINI ALL4 Racing following right behind in fifth position.

Due to the enormous speed Nasser Al-Attiyah and Stéphane Peterhansel raced at in the past days, Team Manager Sven Quandt made the decision that the drivers of the team should keep their positions in the overall standings. “The risk that something goes wrong at the enormous speed the two were racing at got just too big,” explained Sven Quandt. “We wanted cars and drivers to safely make it to the finish and we want to see three MINI ALL4 Racing on the podium.” 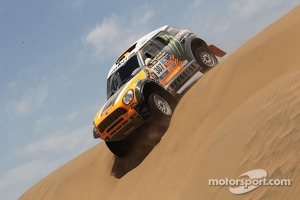 Terranova and his friends were beaming when the Argentinean entered the bivouac at El Salvador. Over the course of the 600-kilometre stage, Terranova worked his way up step by step to cross the finish line as winner, in the end. “This was a long and gruelling stage,” he said, “Particularly for the tyres. There were about 100 kilometres of dunes but the rest was extremely rocky. Nonetheless, we actually made it to the finish without any punctures and without losing our way.” In the overall standings, he now is back in fourth position.

Roma displayed constant speed, in the longest special stage of the 2014 Dakar, and only lost some time due to a puncture. “It was a tough day today,” Roma admitted. “At first I was driving in the dust of Stéphane and then I suffered a puncture. I’m happy that another day is over.” In the overall standings, he now holds a lead of slightly more than five minutes over his team-mate Peterhansel. The Frenchman suffered two punctures on the rocky tracks. “In addition, the team had asked us to stop pushing,” revealed the Frenchman. “It’s the goal to have three MINIs on the podium.”

Al-Attiyah held the lead for the major part of the special stage, today, but in the closing stages he hit a rock, resulting in a broken suspension and a damaged chassis – that fortunately can be repaired. “We had to change the suspension what cost us about 25 minutes,” the driver from Qatar revealed. Despite this incident, he succeeded in defending his third position in the overall standings.

For Holowczyc, it’s all about making it safely to the finish, from today. He holds the secure seventh position in the overall standings. “We had just a normal stage today, nothing special,” said the Pole. “In the overall standings, our gap to the cars in front of us and our lead over the cars behind is so big that pushing wouldn’t make any sense.”

Tomorrow, the field will contest the penultimate stage, with the special-stage action starting start right at the bivouac. Other than in the past years, the bivouac won’t be located at Copiapo as fog again and again prevented the field from starting in time, in the past. Tomorrow’s route mainly will feature sand and dunes. With the special stage completed, the competitors will have to cover another 349 kilometres to the bivouac.