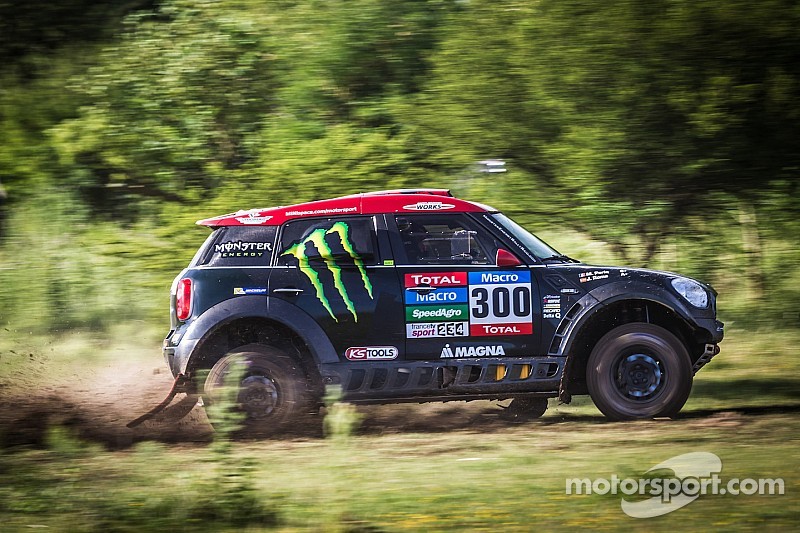 2015 Dakar Rally about to get underway

Munich (DE). The challenge is on: Only one day to go until the start of the 2015 Dakar Rally – the toughest event in motorsports. MINI and the X-raid team are about to tackle this great adventure with nine MINI ALL4 Racing cars in total, including Joan “Nani” Roma/Michel Périn (ES/FR), who already won the event in 2014.

"We did a lot of technical and physical preparation work, I took part in some events at the 2014 FIA World Cup for Cross Country Rallies, which was a good preparation for the Dakar, and now we are in a good shape,” Roma said in Buenos Aires where the event will start on Sunday, 04 January.

Two days will be held at over 4,000 metres altitude which will be especially challenging for the drivers.

Roma: “This year there will be the marathon stage, which will be held in Bolivia prior to the rest day. It will be crucial for the final result of the Dakar. Two days will be held at over 4,000 metres altitude which will be especially challenging for the drivers. But we are in a good physical condition, so that won’t be a problem for us.”

“We'll also face new competitors this year, which will make the Dakar more interesting for fans, more challenging for everybody. This is motorsport. I'm very looking forward to start the event.”

Since 2012 MINI and X-raid have won the Dakar Rally three times in a row. Orlando Terranova/Bernardo Graue (AR/AR) and Krzysztof Holowczyc/Xavier Panseri (PL/FR) will line up for the Monster Energy Rally Raid Team, six more MINI ALL4 Racing cars will be driven by very experienced drivers like Vladimir Vasilyev/Konstantin Zhiltsov (RU/RU), who won the 2014 FIA World Cup for Cross Country Rallies, and Nasser Al-Attiyah/Mathieu Baumel (QT/FR), who finished in third place in the MINI at the Dakar last year.

On 04 January, the 406 competitors will face a 833 kilometre-long stage (170 timed kilometres), which will lead from Buenos Aires (AR) to Villa Carlos Paz (AR). The stage will be held on challenging fast tracks as well as sharp bends in the heart of the Argentinean countryside.

Scrutineering over: 406 vehicles ready to go

InstaForex Loprais Team are going for the first stage!