Next up, Salta - Valparaiso! 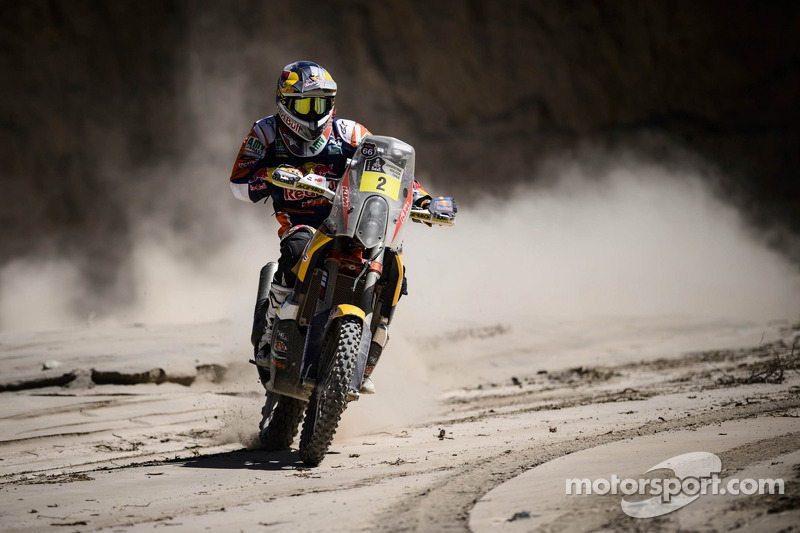 The drivers and riders of 85 motorcycles, 19 quads, 73 cars and 52 trucks are recharging their batteries at the end of a back-breaking first week. For many of them, reaching the rest day was an objective in itself. With the race in Salta, where nine-time World Rally champion Sébastien Loeb seized the opportunity to visit the bivouac, the classifications are led by Marc Coma (motorcycles), Nani Roma (cars), Sergio Lafuente (quads) and Gerard de Rooy (trucks).


The name at the top of the classification halfway through the race is anything but a surprise. Marc Coma had to work to get his racing confidence and effectiveness back after sitting out the 2013 edition, but his performance so far has been flawless. The Catalan rider spent the first few stages watching from the distance as Valencian neighbour Joan Barreda lit up the fireworks, but when stage 5 arrived he seized the opportunity to deal his rivals a vicious blow. 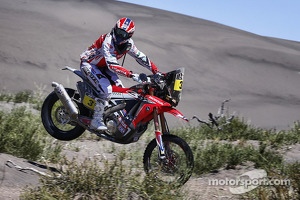 Coma is not just a skilled rider, but also a master strategist who chose the right moment to take the reins of the race. Jordi Viladoms, back in his lieutenant role in KTM, has been of invaluable help to Coma. The comeback kid owes his ample margin in Salta (with only Barreda within an hour of the leader, 42′ down), not just to his superiority, but also to the misfortune of most of his rivals, chief among them Cyril Despres. Having lost over 30 minutes in stage 4 because he had to stop for over thirty minutes to repair a short-circuit in his Yamaha a few kilometres before the finish line, last year's winner conceded almost two hours more the next day due to running out of petrol and a series of navigation mistakes.

With his title defence hopes dashed, Despres can now spend next week testing his Yamaha in real-world conditions ahead of the next edition. Some of the other pretenders to the Dakar crown will not even get this chance after being forced to quit the rally. Ruben Faria and Frans Verhoeven (stage 3), refreshing English stage winner Sam Sunderland (stage 4), his Honda teammate and world champion Paulo Gonçalves (stage 5) and Chilean idol "Chaleco" López (stage 6) all had to go home early.

However, with five different manufacturers in the top 6, KTM should not be too sure of adding another win to their streak yet. Apart from Barreda, Sherco has popped something of a surprise, with both its riders Juan Pedrero and Alain Duclos taking a stage win and the Frenchman sitting in third place in the provisional classification. The Chilean crowds can now cheer on Jeremías Israel, who is fifth overall with his Speedbrain. Further down, among the survivors of this year's gruelling selection, Catalonia's Laia Sanz has played her hand well and sits twentieth overall, 4 h 26′ behind Coma. 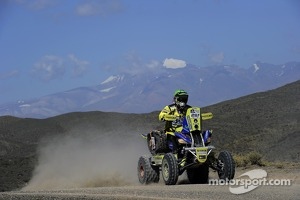 In the meanwhile, the tough course put paid to the hopes of some of the big names in the category, including two-time winner Marcos Patronelli, who dropped out of the quad race during stage 3. Other victims included Lucas Bonetto, Pablo Copetti and Sebastián Palma.

Halfway through the race, we have a much clearer picture of the quad classification. Barring major surprises, the battle for the win in Valparaíso will be fought among three men separated by just 24′. Lafuente is in control, but Sonik is waiting for the perfect moment to pounce and Casale has already said he will go on the attack the moment he touches Chilean soil.

The outcome will decide the podium order, as behind these men there is a three-hour gap to fourth-placed Sebastian Husseini and a gulf of up to 44 hours to the last of the other 14 survivors, including sixteenth-placed Camelia Liparoti, 32 hours back.

Cars: all roads lead to Roma


The cars also put on a thrilling show throughout a first week marked by the stifling heat inside the compartments. The man in command in Salta, Nani Roma, had to wait until stage 5 of six to consolidate his grip on the race. 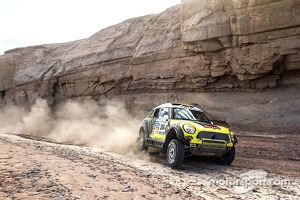 The Catalan grabbed two stage wins thanks to his usual bursts of speed, but what was new was his maturity in managing the race and his symbiosis with co-driver Michel Périn. He has dominated the race "Peter"-style: a navigation coup in stage 5 put him half an hour ahead of all his rivals, placing the first Spanish winner (motorcycles, 2004) in the pole position going into the rest day.

However, with two teammates determined to stop him from becoming the third rider to win on four wheels after doing so on two, he had better not count his chicks before they have hatched. Thanks to his newfound consistency, with four top 5 finishes in six stages, Argentina's Orlando Terranova is well within striking distance (second, 30′30″ back), just like Stéphane Peterhansel (third, 33′23″ back). Also a two-time stage winner during the first week, "Master Peter" has said he will throw caution to the wind to fight for a sixth car win in Valparaíso.

The gloves coming off for the leading trio could play into the hands of the ever-patient Giniel De Villiers, who is fourth, 40′54″ back, despite having been struck by a plague of mechanicals during the first week.

Further back, the penalties they were handed down seem to have smashed the hopes of Nasser Al-Attiyah and Carlos Sainz, respectively fourth and fifth at 1 h 22′ and 1 h 59′, although their ability to vie for stage wins may still turn them into kingmakers.

Other highlights of the first week include Polish delights Marek Dabrowski, running sixth in his first start in a car, and Adam Małysz, whose metamorphosis looks more successful by the minute.

Buggies, on the other hand, have been a big disappointment, with only Carlos Sainz in the top 10 halfway through the race, compared with five Minis and three Toyotas. Nevertheless, MD Sport's Pascal Thomasse and his Optimus buggy sit in a brilliant 12th place. Finally, Japanese Jun Mitsuhashi, 22nd overall, leads the production car classification with a margin of almost 1 h 45′ over his French teammate Nicolas Gibon. 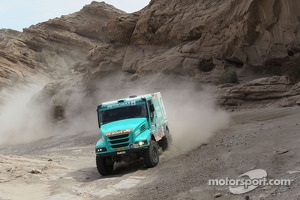 
The race is not over until it is over, but the odds are certainly stacked in leader Gerard de Rooy's favour. With two stage wins and five top 5 finishes in six days, the 2012 champion's performance is as consistent as it is strong.

The only chink in his armour is that he stands alone against Kamaz's Karginov-Nikolaev-Sotnikov trident, who will be able to work together to maximise their chances of success.

«TECHO», where the Dakar's solidarity comes to life