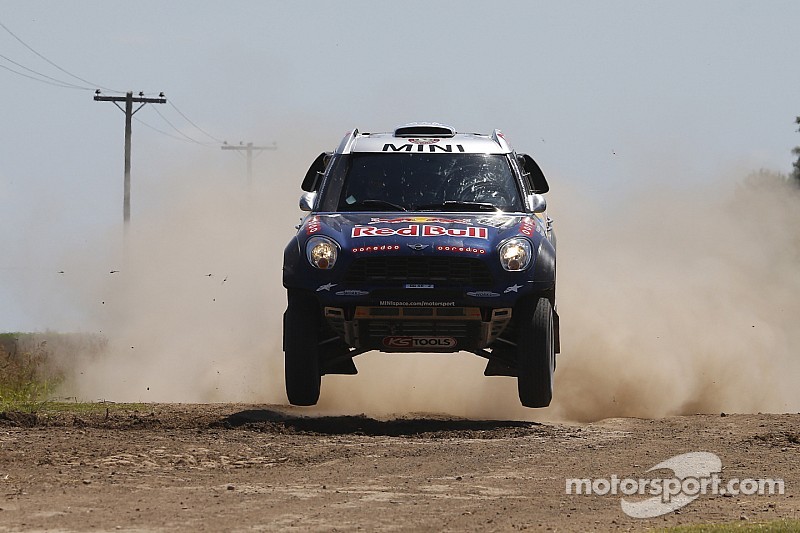 Eduard Nikolaev flew the flag for Kamaz on truck race.

Penalised by two minutes for speeding yesterday evening, Nasser Al-Attiyah was determined to show that he was by far and away the fastest on the tracks today during a special stage which produced significant gaps at the finish. As on the first stage, the Qatari was battling against his team-mate Orlando Terranova and won thanks to a crash by the Argentinean in the last ten kilometres, which saw him lose twenty-odd minutes.

More importantly, Nasser opened up a lead of more than eight minutes over his nearest rival in the general standings, Giniel de Villiers. A second Toyota Hilux squeezed into the day's top 3 with the fine performance of Dutchman Bernhard Ten Brinke, who is participating in his third Dakar and now occupies an unexpected provisional third place.

Fourth in San Juan like yesterday at Villa Carlos Paz, Krzysztof Holowczyc still retains hopes of a final podium finish, whilst Carlos Sainz already lags behind the leader by 26'50'' behind the wheel of his Peugeot 2008. As for Stéphane Peterhansel, he reached the bivouac with more than one hour to make up on Al-Attiyah, whilst Cyril Despres is even further behind. The day was also difficult for Robby Gordon, who suffered mechanical problems at the beginning of the special, and for the unlucky Nani Roma, who is still in the race but a long, long way from the summit of the race.

In the truck race, Eduard Nikolaev flew the flag for Kamaz after a disappointing first day, beating Byelorussian Siarhei Viazovich by 46 second. A second Kamaz completed the day's top 3 driven by Airat Mardeev, whilst Hans Stacey grabbed a fourth place finish that allowed him to hold on to his leadership in the general standings by 20 seconds. Andrey Karginov and Gerard de Rooy, who both dominated in 2014, each lost five minutes on the day's stage.