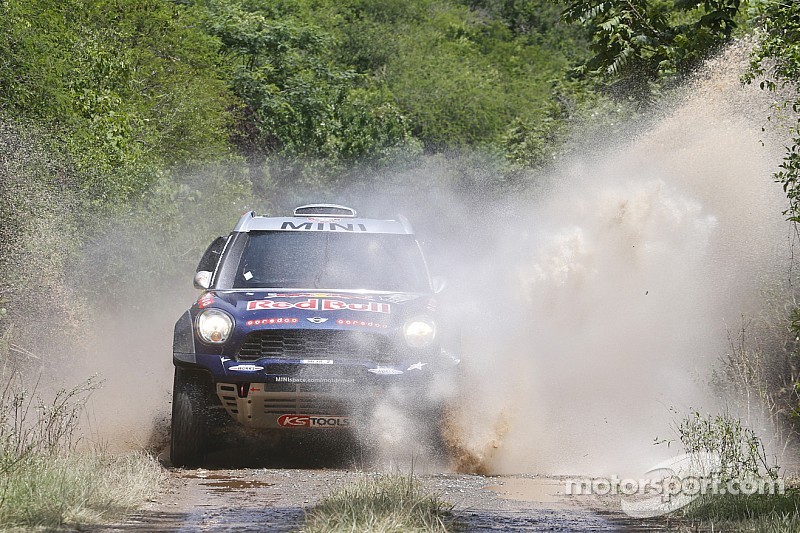 Four MINI ALL4 Racing within the top five in the overall classification now.

Munich (DE). MINI continues to show a dominant performance as the 2015 Dakar Rally is turning into the home stretch. Orlando Terranova/Bernardo Graue (AR/AR) celebrated another stage win on leg twelve, their fourth in total at this year’s event.

Vladimir Vasilyev/Konstantin Zhiltsov (RU/RU) finished in second place. They perfected the fifth MINI one-two victory at this year’s Dakar and moved up another place in the overall classification to P5. So far the MINI ALL4 Racing has won eleven out of twelve stages. Four MINI ALL4 Racing cars are currently within the top five in the overall classification.

Nasser Al-Attiyah (QT) and his co-driver Mathieu Baumel (FR) finished in fourth place today and have further extended their lead in the overall classification. They are now comfortably leading the field by 35:39 minutes.

On Friday the Dakar route lead from Termas de Rio Hondo (AR) to Rosario (AR). The drivers had to tackle a 298 kilometre-long, very fast stage held on twisty gravel roads lined with trees and bushes. The drivers had to be very careful not to wreck their cars on the penultimate stage of this year’s Dakar Rally.

Krzysztof Holowczyc/Xavier Panseri (PL/FR) were in eighth place on Friday and are still in third place overall. Erik van Loon/Wouter Rosegaar (NL/NL) are also continuing to show a strong pace. They are fourth overall ahead of Vasilyev/Zhiltsov with just one stage to go.

On Saturday the Dakar will head to Buenos Aires (AR), where the drivers will cross the finish line after more than 9,000 kilometres across South America. The final stage will be the shortest of the whole Dakar Rally. The drivers have to stay concentrated for another 174 kilometres before they have finally mastered the toughest challenge in motorsports.