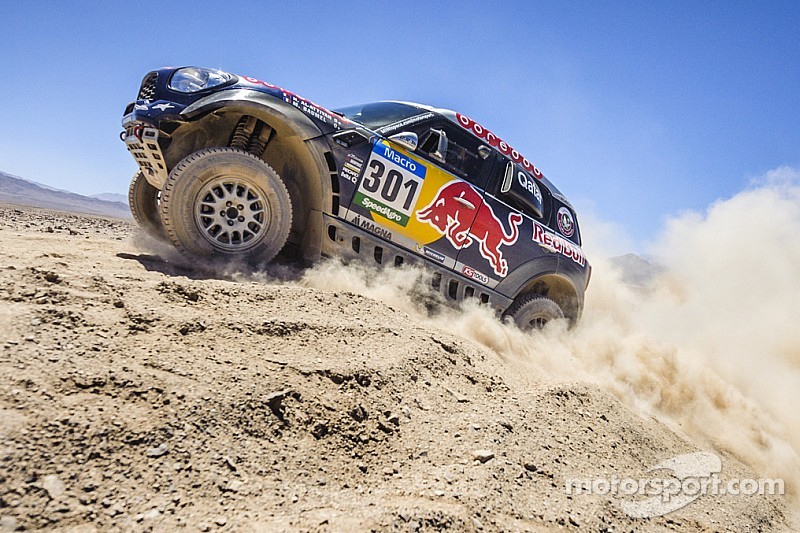 MINI scores strong result ahead of the marathon stages.

Munich (DE). Nasser Al-Attiyah (QT) and his co-driver Mathieu Baumel (FR) are still the men to beat at the 2015 Dakar Rally. The duo in the MINI ALL4 Racing also won the sixth stage at the toughest event in motorsports. It has been their third stage win at this year’s Dakar so far. Al-Attiyah/Baumel have further extended their lead in the overall classification and are now 11:12 minutes ahead of their closest rivals De Villiers/Von Zitzewitz.

Stage six was again short but very demanding. It was characterized by two completely different kinds of soil: The first part of the stage was held on fast gravel roads, towards the stage end the cars had to cross large dunes with very fine sand. Navigation was again the key to success.

Other MINI ALL4 top ten drivers after stage 6

Joan “Nani” Roma/Michel Périn (ES/FR) once again proved to be great navigators. The 2014 Dakar winners made up a lot of ground on the final kilometres of today’s stage scoring a strong 3rd position.

Krzysztof Holowczyc/Xavier Panseri (PL/FR) are still driving at a consistent pace at this year’s Dakar. The duo defended their fourth place in the overall classification. Erik van Loon/Wouter Rosegaar (NL/NL) in another MINI ALL4 Racing are also still within the top ten. They are currently sixth overall.

The upcoming weekend will definitely be the toughest challenge of this year’s Dakar. According to the new regulations the participants have to master the marathon stages - two stages in a row without any technical support from their mechanics or engineers. No more than three spare tires are allowed to be carried within the car. The drivers will have to be extremely careful not to damage their tires or cars. The marathon stages will undoubtedly be decisive for the outcome of this year’s Dakar.

Leg seven will lead from Iquique in Chile towards the northeast to Uyuni in Bolivia. The 321 kilometre-long stage seven will be held on mountain roads on a high plateau at an altitude of up to 3,900 metres. The co-drivers will have to read the road-book with great care in light of the many junctions on the route.

Rodrigues steps out of the shadows, Al-Attiyah rams home his advantage