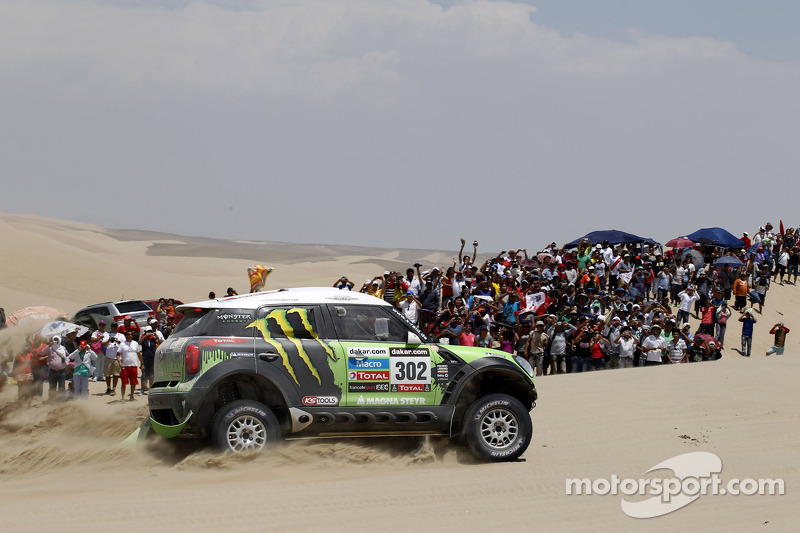 Following yesterday’s calm start into the 2013 Dakar, French pairing Stéphane Peterhansel / Jean-Paul Cottret really went for it, on day two, and secured the special stage win, with their green MINI ALL4 Racing. Despite the difficult navigation, the Frenchmen completed the 242-kilometre special stage without encountering any major problems. In the end, their lead over the rest of the field was that big that they even took the overall lead. 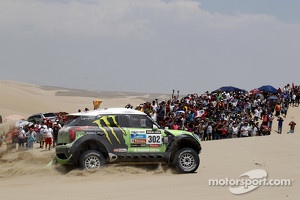 “With the big dunes in the opening stages it was a really nice special stage,” said Peterhansel. “But the navigation was really demanding. At kilometre 75, everybody suddenly began to turn around. But Jean-Paul and I made the right decision right away and headed in the right direction. Nonetheless, I have to admit that the special stage was more difficult than expected.”

The pairing Orlando Terranova (ARG) / Paulo Fiúza (POR) in the BMW X3 CC also made for a great result by finishing fourth. Right behind them, the Russians Leonid Novitskiy and Konstantin Zhiltsov finished fifth, in the orange MINI ALL4 Racing. They lost some time while looking for a waypoint but apart from that, they weren’t too impressed by the special stage. “The special stage itself wasn’t too demanding and I’m really happy with our result,” beamed Novitskiy. “I wouldn’t mind if we could continue like this.”

For Krzysztof Holowczyc (POL) and Filipe Palmeiro (POR) in the white MINI ALL4 Racing, the waypoint also proved to be a problem and so, they had to settle for finishing eighth. “The day wasn’t easy and the Dunes were really demanding,” revealed the Pole. “Nonetheless, we didn’t play with the air pressure as we wanted to continue on the hard tyres. Therefore, we were at the very limit on some of the Dunes but the MIN coped well with the challenge and just refused to let the dunes stop it.”

Meanwhile, the French / Spanish pairing Nani Roma / Michel Périn in the yellow MINI ALL4 Racing encountered a day to forget. They also lost several minutes while searching for the waypoint and a short time later, they were stopped by a puncture. The tyre was that heavily destroyed that it took the crew some time to fix it in the car. Altogether, Roma lost 24 minutes and consequently, finishing 17th was the best he could do. “A really bad day for me,” said Roma. “The fact that we had to look for the waypoint wasn’t too dramatic but the puncture and the consequences were really annoying. I hope that this has been our full dose of bad luck, for this year’s Dakar.”

Boris Garafulic (CHI) and Gilles Picard (FRA) once again opt for the strategy they used in the 2012 Dakar Rally and want to use a conservative approach, with their MINI ALL4 Racing. “We want to avoid making any mistakes,” explained the Chilean. “In the opening stages of today’s special stage we were passed by several competitors but later, they lost their way.” At the end of the 242-kilometre special stage, they crossed the finish line in 18th position. The Germans Stephan Schott and Holm Schmidt took their MINI ALL4 Racing to 34th position.

Tomorrow, the Dakar field will leave Pisco to hit the road to Nazca. Not far from the bivouac, the drivers will start into the 243-kilometere special stage and afterwards, they will have to complete a 96-kilometre liaison section to the next bivouac. In the opening and closing stages, the teams once again will have to cope with dunes – with a faster section in between.

Riwald Dakar Team has an adventurous second stage in Peru