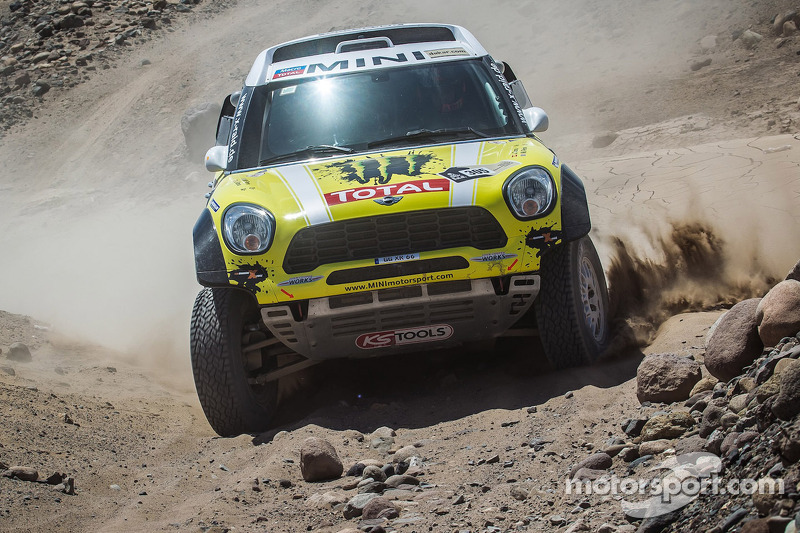 From Peru to Chile, the change of scenery and terrain saw the X-raid Mini team on the attack, along with Robby Gordon in his Hummer. It also was the first Bike stage win in 2013 for Yamaha; thanks to David Casteu.

On the fifth day, the route went from Arequipa to Arica as the Dakar competitors left Peru and entered Chile. Today they went from the sea of sand in one country to a rough in another. It was the type of terrain where navigation was a key element as they needed to avoid the rocks as they entered the Andean valleys.

Joan ‘Nani’ Roma was all smiles as he and his co-driver Michel Perrin notched their first stage win in the Car classification in this year’s edition of the Pan-American Dakar. Second was the X-raid Mini Countryman team leader, Stephane Peterhansel, who of course kept the overall lead.

Roma said, “I felt good this morning. We drove well and tried to remain concentrated throughout the special, which was magnificent. It's all going well for us for the moment. Long may it continue…”

Having no problems today and taking third was the American Robby Gordon. His Hummer cooperated on the first stage in Chile – perhaps his luck has turned around – but he still has a lot of ground to catch up. Rival and former teammate Nasser Al-Attiyah in his new buggy lost a bit of time today but still sits second overall followed by Giniel De Villiers who finished the 5th stage fourth today in his Toyota Hilux.

“Not a very strong day. We made a navigation mistake and got lost a little bit, but, okay, we are here now,” said Al-Attiyah. 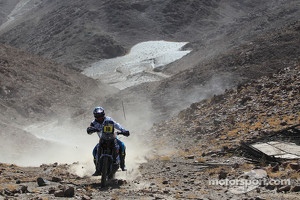 Celebrating their first stage victory in the Bike category this year was Yamaha! Frenchman David Casteu has, along with Olivier Pain who has yet to win a special stage on his Yamaha YZF but he continues to hold the overall lead after placing second today which is what Dakar is all about as being consistent allows the competitor to challenge for the ‘legend’ status over the final days. Casteu is second in the general overall rankings. Unfortunately the day was not kind to Joan Barreda who has two stage wins and was the early leader; apparently his Husqvarna had fuel problems.

“The stage I won in 2010 seems a long time ago. I've always said to myself that winning a special stage is fabulous,” smiled Casteu. “I've really got the feel of my bike now and I'm really enjoying it. It's a bike on which I feel good, on which I gobble up the obstacles and behind the handlebars of which I'm relaxed and calm. I arrived on this Dakar having taken stock, with the aim of enjoying each moment, each second. I'm 38 years old and I'm going to take every day as it comes. I'm itching to ride flat out and today I had great fun”.

Yamaha’s main rival continues to be the Red Bull KTM legend Cyril Despres. One cannot count out Chilean KTM rider Francisco Lopez, or the teammate to Despres, Ruben Faria. The Husqvarna riders have already shown their ability, and at this time, Jordi Viladoms holds a top five overall. 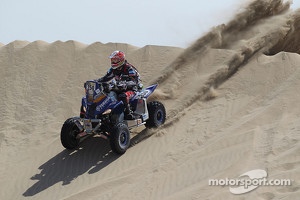 The Quad category winner today was again Marcos Patronelli on his Raptor 700 Yamaha – he now has four consecutive stage wins! The Argentinean appears to be unstoppable as he has increased his gap over his rivals. With one Dakar victory, he knows the risks yet to come. Sebastian Husseini had been holding second but today the newcomer to Dakar had the dreaded mechanical issues on his Honda and has dropped back. Chilean Ignacio Casale takes over second but he is an hour behind Patronelli. Still there is long way to go and the overall leader is well aware of the pitfalls that might yet come.

Watching the Truck classification became interesting near the end. Ales Loprais was on a good run to retain the overall lead that he grabbed yesterday but …. his Tatra got stuck in the sand! The Czech driver has had bad luck in the past. Gerard De Rooy was more than happy to have the overall lead back in his team’s Iveco. He did not win the stage but the Dutch team did as Hans Stacey did. De Rooy was third today but that was all he needed.

“It was a very nice stage and we took care of our truck and I felt fairly good. I have a new Hans system and I didn't feel my neck as much. It's not hurting like yesterday so I can drive normally," said Stacey.

Placing second on the stage and holding second overall is Edouard Nikolaev for the mighty Russian Kamaz team. Third overall is Ayrat Mardeev, also in a Kamaz.

The sixth stage tomorrow has a 358 km special stage as they trek from Arica to Calama in Northern Chile where they will take on the Atacam Desert and more sand dunes!

Botturi fourth in fifth stage on his Husqvarna TE449RR by Speedbrain