MINI ALL4 Racing engage in ultimate challenge on 2013 Dakar Rally 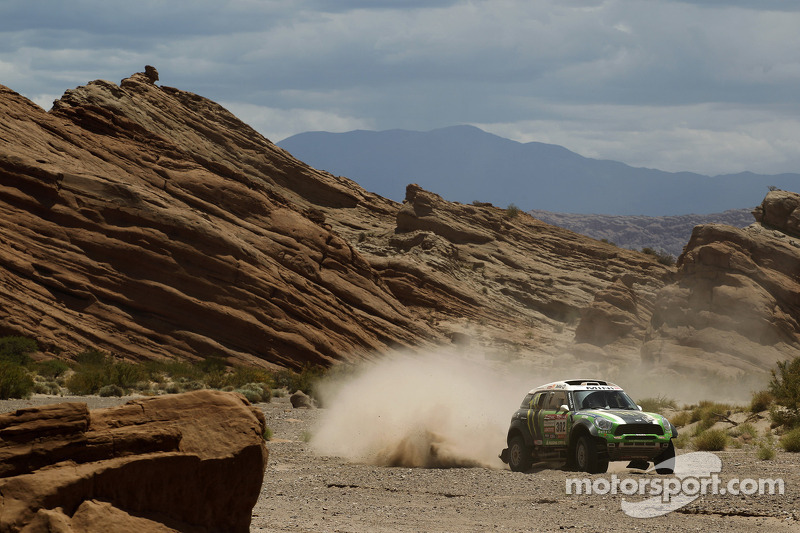 This year’s rally route is anticipated to be the toughest ever held in South America.

Lima, Peru – The Monster Energy X-raid Team and its quartet of MINI ALL4 Racing cars are all set to contest the 35th Rally Dakar, which gets underway in Lima on Saturday, January 5, 2013.

Every member of the X-raid team is determined to repeat the squad’s 2012 triumph by claiming victory on the 2013 Dakar Rally. 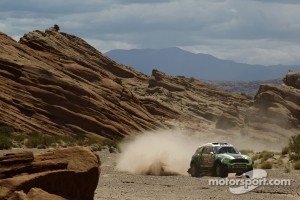 Facing a more challenging route, different technical regulations, and even stronger opposition, the X-raid team has undertaken more pre-event testing than ever before.

This year’s rally route is anticipated to be the toughest ever held in South America, with competitors driving 8,000 kilometers (4,970 miles) through three countries (Peru, Argentina and Chile), during 14 days of action to reach the finish in Santiago. The overall route is far more intense than in previous years, and there will be no easy start for the four MINI ALL4 Racing machines as the first three days take place across challenging desert sand dunes.

The X-raid team won the Dakar Rally for the first time last year, with legendary super-star driver Stéphane Peterhansel taking victory at the wheel of a MINI ALL4 Racing machine.

Behind the wheel of the the other three MINI vehicles will be driver, Joan ‘Nani’ Roma (Spanish, age 40) and co-driver, Michel Périn; Leonid Novitskiy (Russian, age 44) and Konstantin Zhiltsov; and Krzysztof Holowczyc (Polish, age 50) with Filipe Palmeiro.

In total, the X-raid team’s crew members have 20 years of Dakar Rally experience.

Team leader Stéphane Peterhansel is a remarkable record breaker, a legend in his lifetime, and once again starts as one of the favorites to win in 2013.

With 23 Dakar starts under his belt, Peterhansel is the most experienced and most successful driver, with more wins than anyone else (six wins on bikes, four in cars) earning him the nickname “Mr. Dakar”.

The 4.3-meter long MINI ALL4 Racing car is already a proven Dakar winner – claiming victory in 2012, with four other X-raid team machines finishing in the top 10 that year.

For the 2013 event, the MINI ALL4 Racing squad sports new, high-visibility colors, and technical upgrades to comply with new regulations while also enhancing pace and reliability.

The new rear spoiler is designed to produce extra downforce, guide hot air from the engine bay over the roof and extract air from the cabin to improve ventilation.

The MINI ALL4 Racing cockpit provides plenty of space for the two-man crew. Each member is secured by six-point harnesses in specially-formed Recaro motorsport seats and wears a HANS safety system head and neck support.

The specially made dashboard displays the bare minimum of information in three parts: driver, center, and co-driver.

For example, vital information, such as speed, oil pressure, temperatures and electronics information is displayed centrally – visible for both driver and co-driver.

This center stack can be replaced (if necessary) in just three minutes, optimizing servicing times.

The twin-turbo diesel engine is a 2,993 cc power unit based on a BMW production engine and was built by BMW Motoren GmbH in Magna Steyr, Austria.

This enables the MINI ALL4 Racing to hit a top speed of 178 km/h (110 mph) with all-wheel drive traction delivering sensational acceleration on all types of surface.

The MINI ALL4 Racing is equipped with a Sadev six-speed, sequential manual gearbox, Xtrac differentials, and weighs 1,900 kg (empty).

Team Toyo: Get closer to the Dakar action - video

Husqvarna Rallye Team by Speedbrain ready for the Dakar 2013