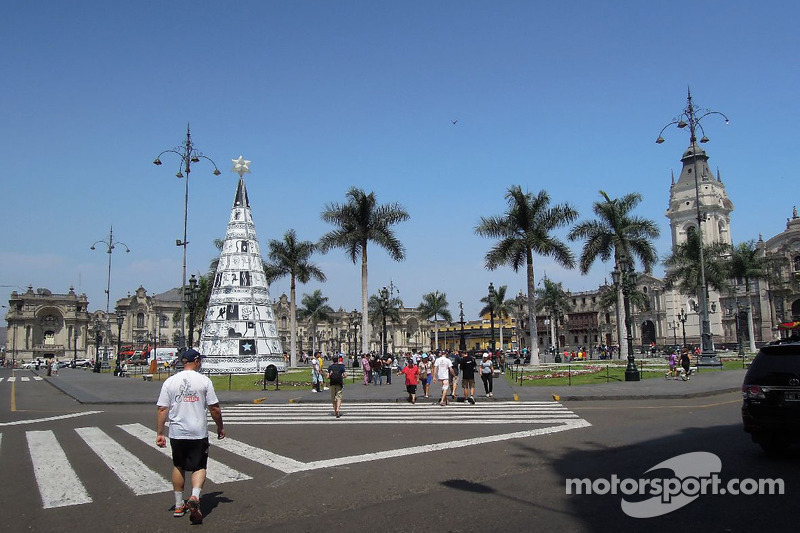 All the President's men: Peru's President visits the opening day of Dakar 2013 and gets a guided tour by Etienne Lavigne, director of the event.

The first day of technical and administrative scrutineering on the Dakar 2013 was marked by the visit of the President of the Republic, who came to encourage the Peruvian competitors. Mr Ollanta Humala is counting on the country's representatives to battle with the Chileans and Argentineans in particular who are more experienced and widespread on the event. 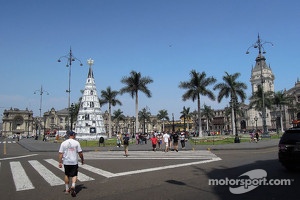 It is a major challenge. For the first start of the Dakar from Peru, 25 competitors from the country have seized the opportunity and are hoping that their ability to withstand the effort as well as their skill behind the wheel or handlebars will enable them to represent their nation in a worthy fashion. Symbolically, the team has been christened “Forza Inca”. To open the site at Magdalena beach where the technical and administrative scrutineering is taking place in the most official way possible, the President of the Republic made the journey in person. Mr Ollanta Humala enjoyed a guided tour of the site from Etienne Lavigne, director of the event, who introduced him to Stephane Peterhansel, whose Mini is already waiting in the queue even though he is not due to meet the race officials until Friday. Interested by the title holder's performance level, the Head of State was especially keen to encourage some of “his own” riders and drivers, taking his place behind the wheel of the 4x4 belonging to Fernando Ferrand. In front of the journalists who followed his visit, the President willingly and patriotically nailed his sporting colours to the mast: “I'm obviously counting on the Peruvian riders and drivers to show that they are genuine competitors and capable of handling the route's difficulties. Furthermore, the whole world will be able to see just how the landscapes of Peru are varied as well as being tricky for the participants. At least as much as in Africa”.

During the Peruvian President's stroll, the Magdalena site progressively grew busier as the day passed by, welcoming approximately 170 vehicles, most of which were South American. Whilst the majority of the favourites will make their appearance at scrutineering on Thursday and Friday, the spectators were nonetheless still able to take pictures of, talk with and greet some of the movers and shakers in the quad category, starting with Marcos Patronelli. The winner in 2010 was as per usual a picture of modesty and discretion before preparing to do battle for the title: “I came without my brother, but I'm not alone: my sister is here and so are all my team. I want to ride a good Dakar and enjoy a race that will be very open: I think that there are at least 7 to 8 quad riders who can win it”. Whilst they await the first action on the tracks this coming Saturday, tomorrow the people of Lima will be able to meet Polish riders Rafal Sonik and Lukasz Laskawiec, who most certainly feature in the broad list alluded to by Patronelli. On two wheels, the challenger to Cyril Despres, Helder Rodrigues, should spike the interest of the commentators. However, Robby Gordon may steal the show from the Portuguese rider: the American's Hummer is often a spectacular site at scrutineering!

Dakar Village: There is more to Peru than just Machu Pichu