Kurt Caselli will substitute for Marc Coma in 2013 Dakar

KTM, the brand whose factory teams and bikes have sealed eleven consecutive Dakar Rally victories named their U.S. offroad rider Caselli as the substitute for the injured 2012 DAKAR champion.

KTM, the brand whose factory teams and bikes have sealed eleven consecutive Dakar Rally victories announced in a press conference in Barcelona on Friday that one of its key riders, Spaniard Marc Coma will be unable to ride in the 2013 edition of the world’s most famous rally.

Marc Coma, who injured his shoulder in an accident in the Morocco Rally in October, is not completely fit. The team has therefore decided he should not tackle the event that involves more than 8000 km of perilous riding over the world’s toughest offroad terrain through Peru, Argentina and Chile.

Alex Doringer (KTM Rally Factory Team Manager): “Marc is one of our key riders and together with his teammate Cyril Despres has giving KTM the last seven Dakar titles.

While we are disappointed that he is unable to ride, the health and welfare of our factory riders is the most important consideration. If he is not 100 percent fit, it is better for him to sit out the 2013 rally.” 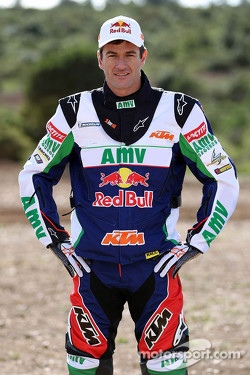 Coma, winner of three Dakar titles and the reigning World Cross Country World Championship is, together with his teammate Despres, recognized as one of the world’s finest exponents of rally sport.

A deeply disappointed Coma spoke after the press conference saying: “We worked really hard with the doctors and the physiotherapists right up until the last minute but we have to be realistic.

One of the muscles in my shoulder is still giving me problems and there is a lack of movement. This is the logical consequence and we must be honest and clear about the situation.”

Coma, who will now concentrate his efforts on regaining complete fitness ahead of the rest of the 2013 season and looking forward to the Dakar 2014 said he was sad for the team but underlined that the Dakar is a ‘winning project’ for KTM so there was no alternative than to make this announcement.

Team manager Alex Doringer said he hoped Marc would be at the start in Lima to wish the team well and see them launch their attack.

Doringer underlined that in view of the high profile that the Dakar Rally has for KTM, that the company had always taken the precaution of having a reserve rider registered with the Dakar organizers, ASO. He said they had now given the green light for the accredited reserve rider to step in and ride Coma’s KTM 450 Rally bike.

“We always took the precaution to have a reserve rider properly registered in case of such circumstances and it will be KTM USA’s Kurt Caselli who will step in to ride Coma’s bike. We want him to ride the Dakar without any pressure, embrace the adventure and learn from the experience,” Doringer said.

Caselli is at the forefront of the US offroad scene and is the current AMA National Hare and Hound Champion.

He is a multiple national title winner in premium US offroad events, has been a stalwart in the US International Six Days Enduro (ISDE) Championship and was a member of the KTM team that recently finished second in the 2012 edition of the legendary Baja 1000. Caselli’s start number is yet to be confirmed.

Kurt Caselli: “It has always been a goal in my career to compete in the Dakar. There would be no way possible for me to achieve this without the ongoing support of KTM. To be able to race the greatest off road race in the world aboard the best bike in the world is truly a blessing. This is not only a milestone in my career but also in my life.”

Dakar 2013: Exceptional is the watchword

Ten things to watch for in the 2019 Dakar Rally