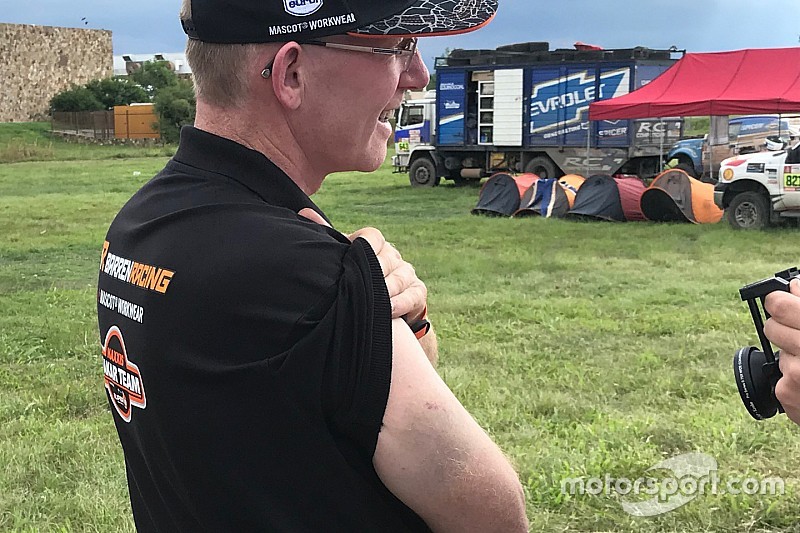 Kees Koolen has launched an extraordinary tirade aimed at Carlos Sainz following the quad rider's alleged run-in with the Peugeot Sport driver on Saturday, with claims he'll make criminal charges after the event.

Koolen was left shaken by a close call with Sainz's buggy during the La Paz - Uyuni stage, the pair now bickering over whether or not there was genuine contact made in the wake of Sainz being handed a 10-minute penalty.

Sainz is adamant he narrowly missed an out-of-control Koolen, and says he's "disgusted" by the penalty given he feels he helped avoid a serious accident.

Koolen, however, says he was definitely hit by Sainz and that the 10-minute penalty isn't severe enough.

In fact, the Dutch businessman is now talking about making criminal charges over the incident.

"In my protest, and I don’t say a lot about my protest, when there is a serious penalty for this case, I would be happy," he said.

"If there’s not a serious penalty… Everybody knows I’m a businessman and have access to a lot of good lawyers, maybe the best lawyers in the world, better than these organisations have themselves.

"If you don't take serious penalties I will take my measurements when I come home again and I will file a criminal offence."

Koolen claims he was 20cm from death

Koolen didn't hold back when telling his side of the story, with sensational claims that he was 20 centimetres from being killed by Sainz's buggy.

"Normally you look around when you hear the sentinel [and] you have 10 or 20 seconds [to decide] what to do," he explained.

"It was unbelievable. I was in the mud and was very lucky in the end. He hit the quad. You can see on my quad that there was a lot of damage. He says he didn’t hit me.

"My origin is that I;m an mechanical engineer. The part that was hit and deformed, I will ask a 3D engineer to calculate it, but I think you need 1500 kilos, to deform something, maybe 2000 kilos.

"He said nothing happened, he didn't feel it.

"I will ask technical experts, I have the parts saved. I expected somebody to steal it this night so I can’t prove it anymore, but I have saved them and will give it to a calculating company, they will see what the force was."

"It was about this situation. I was there in a difficult situation and the car created a very dangerous situation. If the car would hit me 20 centimetres to the left, I would be dead.

"I think if I would be dead, it would have been a lot easier for Peugeot and Carlos because then I wouldn’t be able to talk anymore."

Koolen also reckons Sainz failed to stop and check if he was okay, and says there has been no apology from driver or team.

"I could have been dead and he didn’t even look around, did not stop, did not ask afterwards if I was okay," he said.

"Peugeot didn’t come to me. Everybody’s talking in the office behind me and I wasn’t asked about anything. I could have been dead and nobody cares. Because they have to protect a good rider and to protect each other. I have had no apologies, nothing.

"If we are racing and I hit you, at that moment we’re racing but afterwards we come to each other to shake hands, to talk about what happened, 'are you okay, can I help you?'

"Nothing of that. I think that is the worst thing. They consciously took very big risks, for danger for the life of people. They don’t help and don’t apologize. I can’t imagine that."

No communication with organisers

Koolen went on to allege that he was never contacted by the organisers to discuss the incident until the decision about the 10-minute penalty had been handed down.

"I think what is very strange and very stupid, nobody has asked me anything, only the press," he said.

"When it happened nobody came to ask me what happened. Not Peugeot, nor Carlos. Now I hear that there is a result from the jury, I was not asked about it, nobody asked me anything.

"I think the penalty should be very big, not because of Carlos but because of the situation. It should be an example for the motorbikes.

"Yesterday the riders on bikes have complained about the same people. The FIM has asked me to write a letter, because all the other riders were very afraid to file a complaint.

"I said to myself yesterday, if there is a serious penalty, I will keep my mouth shut and will not talk about anything anymore, but this is ridiculous.

"I think it's not about Carlos, I think it’s wrong to talk about that. It is about the situation. This is an example that the cars should care about safety. ASO, FIA, FIM always tell us that you can do what you want, you can do a dangerous sport but there is one rule, that’s safety first.

"If somebody is in danger, you help each other. And they didn’t do these things."

Ties to Overdrive 'nothing to do with this situation'

Koolen also brushed off suggestions he had business ties with the Toyota Overdrive squad, saying that there is no direct involvement despite a link through a joint investment.

"I’m a professional investor and am involved in many companies. I invest in 100 companies, I’ve been investing in a company that has invested in Overdrive. I’m not a direct shareholder.

"Maybe I’m shareholder in 10 of these companies in the bivouac. I don’t know and I don’t care, because I’m a professional.

"I put my money in business cases and after that it’s up to the management, I don't work with the companies."