During the move from Peru to Chile The Princess 69 encountered electronic problems and dropped to 8th place over all.

This is Dakar and the Princess revoked before the end. We have first serious problems.

The relative late start allowed the slowest racers substitute time that they have lost before. They all move about two hours at the time due to changing time zones. In the fifth stage, which connected the two states and the contest entered the territory of the Chile, there was a distinction in the landscape. 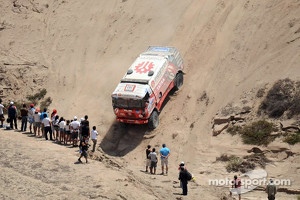 Average speed of competitors changed too. The contestants had to weave from valley to valley. Difficult stage resulted in navigation too. But that wasn’t the problem of our crew. Our crew had a problem with The Princess 69. Electronic fault 20 km before the finish means the 8th place in overall results, slump to the 62th place in the stage and loss 1:57:53.

The pilot of our Tatra expresses to this situation: “We almost not even believe that we will get to the finish. We have been looking for a fault for a long time, because we left the battery, alternator, as well as 4x4 drive. Unfortunately, it can be crucial in the Dakar Rally. Moreover the car didn’t cool and it couldn’t start, even though we were stuck in a relative easy terrain. The car became immobile just 20 km before the finish. The only salvation for us was the another Czech, Marek Spácil, who deserves praise and thanks. He managed to drag us to the finish even at the expense of lost his own time. Thanks to him we can still continue in the competition.”

Once again we remain the words of Karel Loprais how tricky may Dakar be and how the winning during the competition like this does not mean anything. “There may be some problems, that can be fixed, however the technical problems with electronics and electric cables are one of the worst, that could happen. We lost nearly two hours, and because of that also the winning. But the race is not lost! Mechanics are already looking for the cause of these problems and no-one ever think about the end in the competition. Well, this is Dakar. We heard the first information talking about defect, unfortunately it is only the unlucky electronics.” Answered sad Aleš Loprais behing his leaving to the bivouac.

Luckily the team is full of the fighters and because of their hard work during the night until the dawn the car is repaired and ready to continue in the race. The sixth stage is following and its 438 km long trial plus 291 km long connection 438 km long crossing section. It will be extremely difficult, especially after yesterday. Mostly the beginning and the finish of the stage command respect. Firstly there is hard rising and then falling terrain, basically as on the roller-coaster. Then there is speeding and at the end of the stage there is huge rising to almost 2,5 km above sea level.

We would like to dispel a fact and information who helped our crew. “It is true that Marek Spácil stopped with us and tried to tug once but then leave. Nothing more, nothing less. A completely different German Monster BMW crew o Man saved us. Unfortunately we don’t know their names…. They didn’t drag us up to the finish, they tugged three times and then the engine ran. They lost with us probably six minutes, Marek about three minutes.” Said to debunk Aleš Loprais.

So thanks for the help and for the “tugging” belong to everyone!

Still is true, that the demanding stage and other adventures are waiting for us. Therefore it’s necessary to concentrate and to continue supporting our crew.

We wish Aleš the best to his todays birthday, the Princess 69 to get wiser and Marek Special huge thanks from all of us here supporting them.