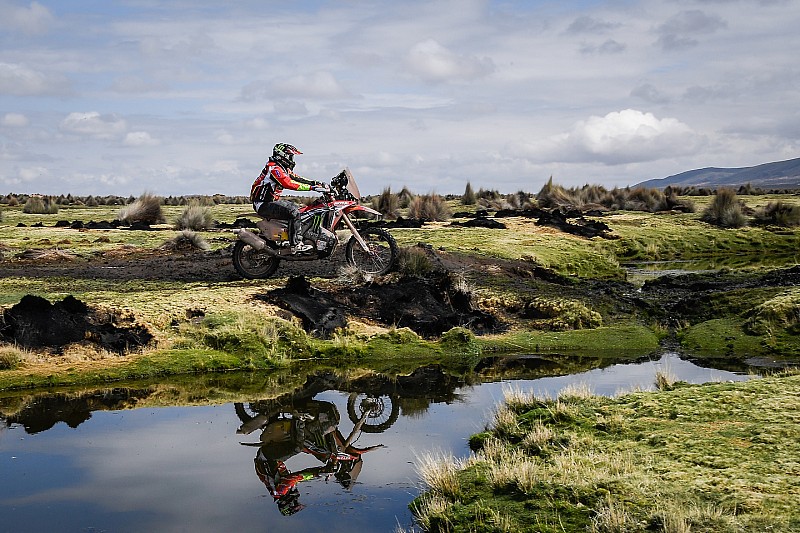 Dakar 2018 frontrunner Joan Barreda sustained a knee injury in a crash during the rally's seven stage, with his Honda team not certain he can continue to battle at the front of the rally.

Barreda, who is still chasing his first Dakar win despite having long emerged as a perennial contender, has topped a rally-high three stages in this year's event so far.

He had added to his tally during Saturday's 425km La Paz – Uyuni test, despite hurting his knee in a crash in the final stretch of the stage.

Arriving at the Uyuni bivouac in pain, Barreda admitted he wasn't certain he could continue – but he finally opted to race on, after being cleared by the rally's medical staff.

“I'm a little annoyed,” Barreda admitted. “We have done a good job, but towards the end I went off the track, there were some big water holes and I dropped the bike.

“From the first moment, I could not get up with my leg, I even felt dizzy. It took me a few minutes to get up. Then I continued with a calmer pace.

“A couple of times I could not support myself with the leg and I had to fall to the ground because my knee was totally unstable.

“The truth is, the second part of the stage was quite fast, and I could finish the stage – but as soon as there are some technical zone and you have to put your leg on the ground, I had a very bad time.”

The medical tests confirmed Barreda had escaped the incident without fractures, but also established that he had some “liquid inside the knee”.

Should Barreda struggle with fitness, he could face a particularly gruelling ordeal in Sunday's stage – which features a 498km timed section.