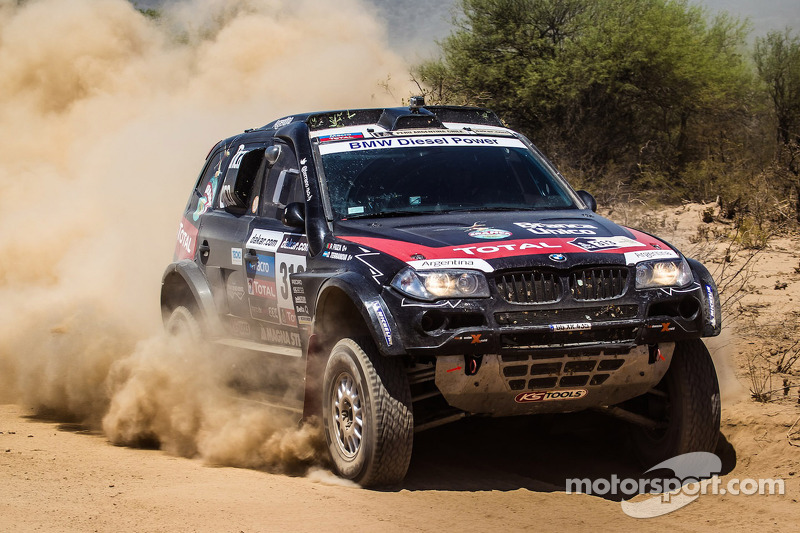 Another one-two-three for the X-raid Team. Nani Roma and Stéphane Peterhansel second and third respectively.

In front of his home crowd, Orlando Terranova delivered in outstanding style to win the special stage from Cordoba to La Rioja, with his BMW X3 CC. Together with his Portuguese navigator Paulo Fiúza, he proved to be invincible in the 10th special stage. Terranova comes from Mendoza and knows the region and its terrain like the back of his hand. But the crew in the Monster Energy X-raid Team’s service park had even more reasons to cheer about: just as it had been the case yesterday, the Trebur based squad once again celebrated a one-two-three. The second position behind Terranova was secured by the winners of yesterday’s stage, Nani Roma (ESP) and Michel Périn (FRA) in the yellow MINI ALL4 Racing. Right behind them, French pairing Stéphane Peterhansel / Jean-Paul Cottret finished third, with the green MINI ALL4 Racing. With this result, Dakar leader Peterhansel kept on extending his lead over the second-placed Toyota driver Giniel de Villiers. 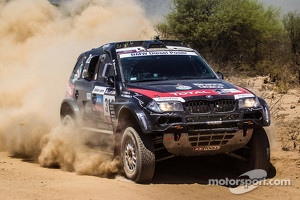 Terranova truly drove in a class of his own, today. Just a few kilometres after the start, not far from Cordoba, the Argentinean took the top position on the time sheets. From checkpoint to checkpoint, the BMW X3 CC driver extended his lead over the rest of the field. And after having crossed the finish line he was celebrated as the first South American ever to have won a Dakar Rally stage. “A great day for Argentina and South America,” Terranova beamed. “Paulo and I are improving our cooperation day by day. I’m convinced that you will see us more often battling it out at the very front of a rally field, in the future.”

Nani Roma had to start as first driver into the 10th stage. “After two days it was nice to have the chance of driving without having to cope with the dust raised by a car driving in front of us,” the Spaniard said with a smile. On the other hand, he was laying the trail for the other competitors. “I’m happy with having finished runner-up,” he added. “Today wasn’t the day to push to the max.”

As Nasser Al Attiyah was forced into early retirement, yesterday, Stéphane Peterhansel now has got a lead of nearly 50 minutes over second-placed Giniel de Villiers. Therefore, he opted for a somewhat conservative approach, in the 10th special stage. “I didn’t want to take any risks and therefore, I apparently drove too slowly, in the opening stages,” revealed the Frenchman. “But when Orly started to overtake me I knew that I had to push a little harder. On the other hand, having finished third is not too bad as being the one who has to lay the trail in the dunes of Fiambala isn’t exactly what I would call an advantage.”

Russia’s Leonid Novitskiy and his compatriot and co-driver Konstantin Zhiltsov mainly look forward to tomorrow. “WRC-style stages such as the ones we had to contest yesterday and today just don’t suit us that well,” admitted Zhiltsov. “In the coming days in the dunes, however, we should have what it takes to battle it out at the front end of the field.” In addition, the Russian pairing lost some time due to a puncture after having hit at stone, with its MINI ALL4 Racing. Nonetheless, they succeed in defending their third position in the overall standings by finishing 10th.

Chilean-French pairing Boris Garafulic/Gilles Picard took its MINI ALL4 Racing to 15th position while the Germans Stephan Schott and Holm Schmidt were involved in a collision with an opponent, resulting in a damaged radiator. They still are on their way to completing the special stage.

In the 11th special stage, the field will have to cope with the notorious dunes of Fiambala. Here, nearly the entire field got stuck in the maiden Dakar edition on South American soil. Following a 256-kilometre liaison section, the competitors will have to complete a 221-kilometre special stage across sand and dunes. After having crossed the finish line, they will have to cover just another six kilometres to the bivouac.

Gordon ended up fifth on stage 10 in his Hummer