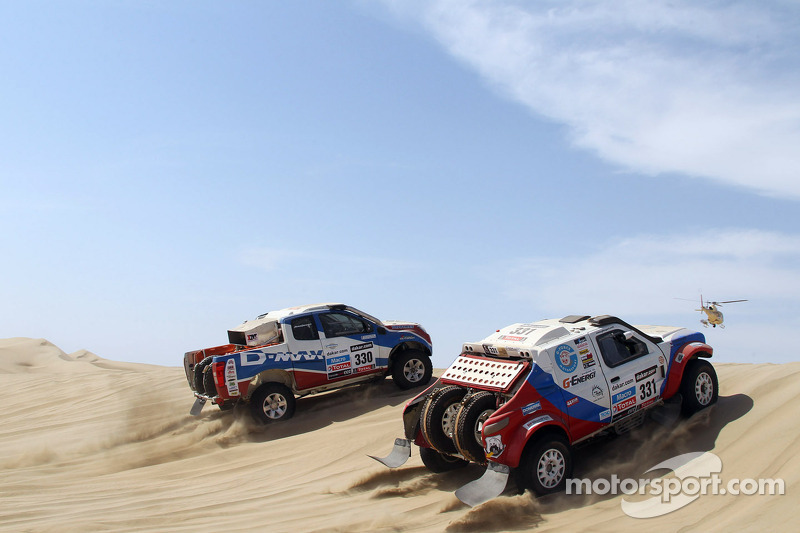 The rookie team continues their learning experience at Dakar

The Dakar prides itself on being the toughest motorsport event in the world and the very first real stage caught out many of the top runners. The locals call this area of dunes the ‘Graveyard of Whales’ and some very big fish suffered a variety of woes here. Huge names like Gordon, Sainz, Al-Attiyah, Chicherit and Roma all lost time. 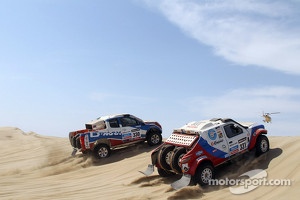 But with statistics seemingly stacked against them, as only 10% of rookies finish their first event, the two top G-Force drivers, Vladimir Vasiliev and Boris Gadasin took the stage softly, softly with no major upsets. Gadasin was the picture of consistency with his 15th place, as that is the same place he started from, but Vasliev was up to an amazing 6th place at a midway checkpoint!

Vladimir Vasiliev: It was a good track today, very similar to the Pharaons Rally Egypt with rocks and sand and actually we didn’t find the dunes to be too complicated. Unfortunately we got a puncture 40km before the finish but tomorrow we will do the same, just to go at our own pace as planned.”

Boris Gadasin: Today's stage really reminded me of Egypt. It wasn’t too hard and we even got a faster time than we were planning. We had trouble finding a waypoint and actually only found it with help from the organizers... but the rest, everything went fine. We were aiming for a position somewhere between 15th and 20th so to get 12th and 14th was great.”

But hard luck has struck the third member of the team already. Andrei Cherednikova’s rally became a disaster just a few meters from the start line when the engine refused to start. An hour and a half was lost almost before the rally had begun so starting absolute last was always going to be a challenge but the positive crew still managed to smile at the end. Co-driver Albert Horn explains: “It was a lot of extra work to overtake so much in the thick dust but then unfortunately we got stuck in the soft sand and had to dig the car out... but broke the clutch in the process and it was so hard to go that it was dark by the time we got to the finish. The lights weren’t really good enough and in the dunes we couldn’t see a thing so managed to get to the end by just some kind of sense of feel. And because there was no clutch I had to jump out of the moving car with the time card while Andrei drove around and around the checkpoint in circles while I got the stamp! So one stage down and we already have some real Dakar stories!”

Tomorrow sees some of the toughest dunes on the whole rally but someone wise once said that the meek shall inherit the earth. We’ll see if the team’s cautious approach to the initial stages will pay off.