Fifth stage win for MINI at the 2015 Dakar Rally 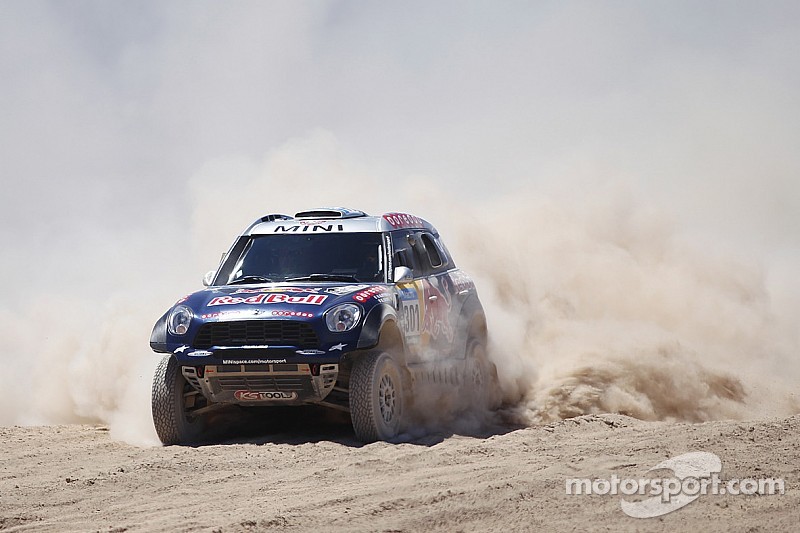 Munich (DE). Vladimir Vasilyev and his co-driver Konstantin Zhiltsov in the MINI ALL4 Racing have won stage five at the 2015 Dakar Rally. The two Russians, who won the FIA World Cup for Cross Country Rallies in the MINI ALL4 Racing in 2014, turned out to be the best navigators on the challenging 458 kilometre long special stage, moving up four places in the overall classification. They are now in a strong seventh position.

On leg five the Dakar had to master the unforgivable Atacama Desert in Chile. The 697 kilometre-long route lead from Copiapo to Antofagasta. The special stage was held on loose gravel as well as huge dunes with extremely fine “fesh fesh” sand at an altitude of up to 3,000 metres above sea level. The constantly changing soil was extremely demanding for the tires, thus a lot of drivers suffered tire failures.

Six MINI ALL4 Racing finish within the top ten

MINI made the best out of the tough conditions and finished the day on a high note: Six MINI ALL4 Racing cars were within the top ten, including Krzysztof Holowczyc/Xavier Panseri (PL/FR) who were seventh quickest and moved up to fourth place overall. Joan ”Nani” Roma (ES) and his co-driver Michel Périn (FR) finished in 8th position.

Erik van Loon/Wouter Rosegaar (NL/NL) were in ninth moving up another place in the overall classification. They are now in an excellent fifth position. Orlando Terranova/Bernardo Graue (AR/AR) in the MINI ALL4 Racing completed the top ten today.

Leg six on Friday will lead from Antofagasta further north to Iquique. The 277 kilometre long stage six will be comparatively short but very intense. The drivers have to master large dunes with fine sand again. Navigation will be the key factor to success as many of the dunes will look the same.