Subscribe
Previous / Al-Attiyah: 2022 Dakar regulations have made my life easier Next / Sanders out of Dakar after liaison section crash
Dakar / Dakar News

Toyota driver Giniel de Villiers says it was “upsetting” to receive online abuse and death threats after he was involved in two bike incidents in the opening days of the 2022 Dakar Rally.

De Villiers ran over Chilean rider Cesar Zumaran on the second stage of the rally-raid on Monday, earning himself a five-minute time penalty for the collision.

This was followed by a second accident the same day, where the South African was unable to avoid the crashed bike of Mohamedsaid Aoulad Ali after coming down a dune.

The FIA stewards initially handed him a five-hour penalty for acting in an “unsafe manner”, leaving him out of the fight for overall honours.

However, de Villiers was subsequently cleared of any wrongdoing after a protest by Toyota on Friday, putting him back to fourth in the standings.

Toyota was able to supply the exact GPS data of the car, which was not available to the stewards at the time the penalty was handed.

Moreover, an investigation from Dakar’s Sentinel safety system provider ERTF concluded that the reception inside the car was “adequate but not optimal”, which could have caused the signal to be transmitted later.

It was found that the system warned de Villiers just two seconds before the collision, leaving him with little time to take action. Since he was able to avoid the motorcycle rider, the FIA decided to withdraw the penalty.

While de Villiers said he was happy to close the chapter after proving that he was blameless in the second incident, the South African admitted that he was left deeply upset by the hatred he received online.

“The abuse you get on social media and even death threats, it is incredible,” de Villiers told Motorsport.com.

“It's the first time I've ever experienced something like that. I must say it's not really pleasant.

“This is normally from people that don't know the situation, they are not here. They are sitting at home and it's very easy to comment on something when you don't really know the facts. But still it's quite upsetting to see this kind of thing.

“So from that point of view I'm happy that this is behind us.

“We know we did absolutely everything to the maximum to not run over this bike. It's very difficult in the dunes, that people are behind the dunes. It's unfortunate.

“The investigation was not done properly [initially]. The good thing is the penalty is removed and we can race now, we are back in the race.” 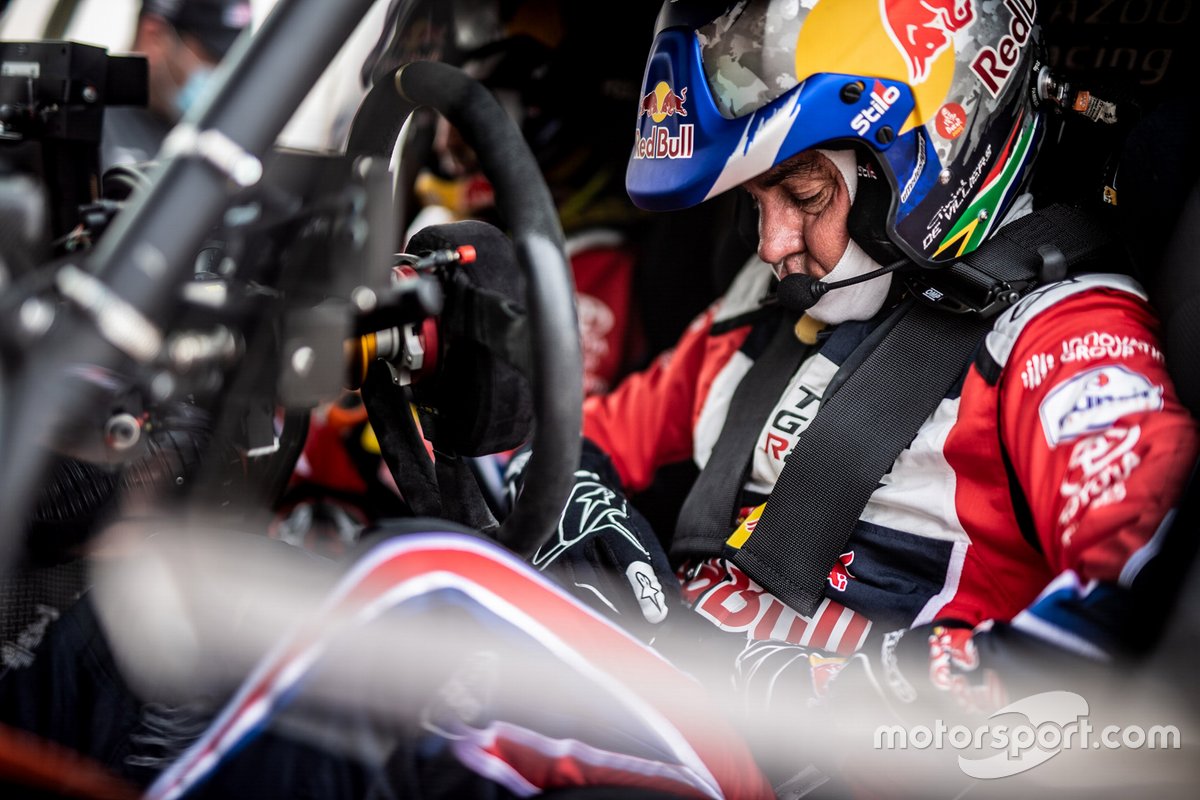 De Villiers has since offered to compensate Aoulad Ali for the damage to his KTM as well as pay his 2023 entry fee after he was forced to retire from this year's event.

While both Zumaran and Aoulad Ali understood why he was unable to avoid a crash, de Villiers says more could be done to improve the safety standards in cross-country rallying.

“I still think that we have to try to improve the safety even more because if you have bikes and cars racing on the same track in dunes like that, it is incredibly difficult,” he said.

“The Sentinel system on my car also didn't work, which we complained about from the beginning of Stage 1. We were delayed 12 minutes at the start of Stage 1, it was not working properly. So we did not hear the alarm all the time.

‘They finally fixed that two days ago. They realised that it was not working properly, so we could not get a warning in any case in this situation.

“I was just very fortunate that at the last minute I came over the dune to instinctively avoid him because there's no way I could have seen him behind the dune.

“But the most important thing is that both the guys are fine. I spoke to both the bike riders and they are very nice guys. I completely apologised to them for what happened.

“The first guy is in the race, he is a very nice guy. I spoke to him and he completely understands [the situation].

“And the second guy, I feel sorry for him because his bike was damaged, he could not continue. We will make sure that he has a bike for next year, fix his bike, and we will pay for his entry.

“It's the first time he did the Dakar and now he could not experience the complete race. Although It looked like the others also drove over the bike.

“We will make sure from our side we will rectify the situation and give this guy a chance to do the Dakar next year. It's the least we can do and that is in the spirit of the Dakar.

“What is not in the spirit of the Dakar is what happened over the last couple of days and it's unfortunate, but we try to put that behind us and try to focus.”

Sanders out of Dakar after liaison section crash