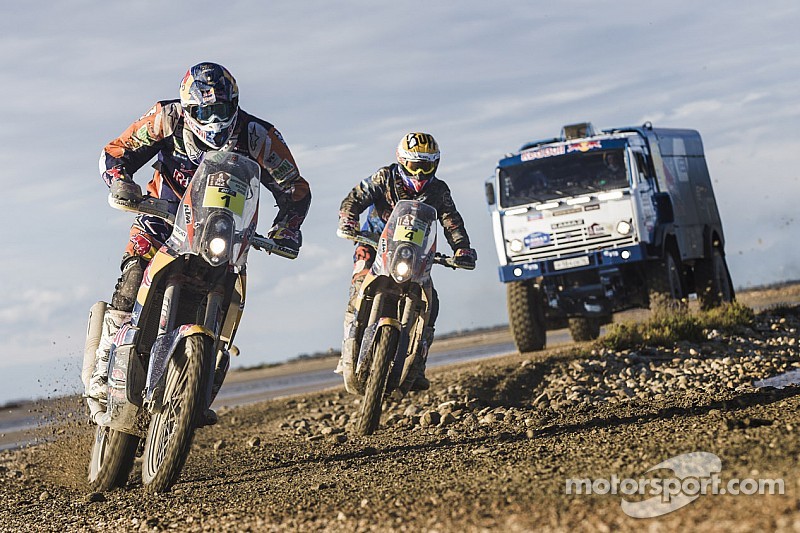 The second day of technical and administrative scrutineering witnessed the visit of a portion of the pretenders to the title.

The Honda riders Barreda, Rodrigues and Gonçalves remain vague for the moment. Furthermore, the drivers of the three Peugeots prefer to wait for the first verdicts on the tracks to see how they will be set. The ‘Lion' has not even bared its teeth yet, no matter starting to roar!

The sun returned to the Argentine capital today. Here and elsewhere, the amount of fabric worn by those who came to stroll past scrutineering was inversely proportional to the air temperature. Although it is sometimes considered as a world apart, the Dakar is no exception to the rule, even less so its village set up for several days in the Tecnópolis exhibition centre. In its aisles, trousers were swapped for shorts, jackets were packed away and t-shirts brought out.

The general public were in attendance in even greater numbers for this second day of scrutineering, and not just to chatter about the size of the mini-skirts worn by the hostesses found at the many stands set up by the race's partners. The Argentineans are first and foremost motorsports aficionados: it was therefore the riders, drivers and their machines that were the most popular in the lenses of the cameras and on screens of smartphones, especially the pretenders to the crown who have arrived with the ambition of winning the trophy in a little more than two weeks' time in Buenos Aires.

The earliest arrivals were able to meet one of the competitors who genuinely belongs in the category of ambitious pretenders in the truck race, Gerard De Rooy (the winner in 2012), as well as one his rivals, Ales Loprais, now behind the wheel of a MAN truck and focused on, “aiming for the podium, at the least”. By way of a response, and even a form of encouragement, the record holder for victories in the category who is now the team boss at Kamaz, Vladimir Chagin believes that, “we are capable of winning, but it's by no means a sure thing…The same can be said for 10 to 15 trucks at the start”.

In the bike race, the roles of designated rivals to title holder Marc Coma have mainly been distributed within the Honda HRC team. However, its leaders, already having seen their ambitions go up in flames in the past, preferred to play it humble rather than brash, starting with Joan Barreda, the leading stage winner last year but only 7th at the finish. “We're ready. Now we want to get started,” said the team leader, whilst Helder Rodrigues (5th last year) preferred to praise their preparation: “We've worked really well and prepared our strategy”.

It has been the talk of the town for several months now and has even been the question on most observers' lips: the capabilities of Peugeot to win on its return to the Dakar after a 25-year absence. As promised, the three DKR 2008s taking part this year and entrusted to a trio of virtually unequalled champions caused a sensation at Tecnópolis. However, the burning desire of their drivers to create a surprise and beat the Minis on the team's first time out did not lead to any throwing down of the gauntlet.

Stéphane Peterhansel, who emphasised his experience, explained that, “we drivers have the experience of the Dakar, so we don't feel the pressure, but maybe the rest of the team do”. Although he is counting on a reconversion that he hopes is as fruitful as his career on a bike, Cyril Despres also put things into perspective, stating, “I've had pressure setting off alone on a bike in the cold, the rain, the night and sometimes under the shadow of doubt.

This time, the focus will be on pleasure and on building something”. This was precisely the point emphasised by the winner in 2010, Carlos Sainz, whose modesty was only equalled by his ambition, which he did well to hide: “This is a Dakar for testing and working”. Although that does not exclude some surprises in store, one might be tempted to add…