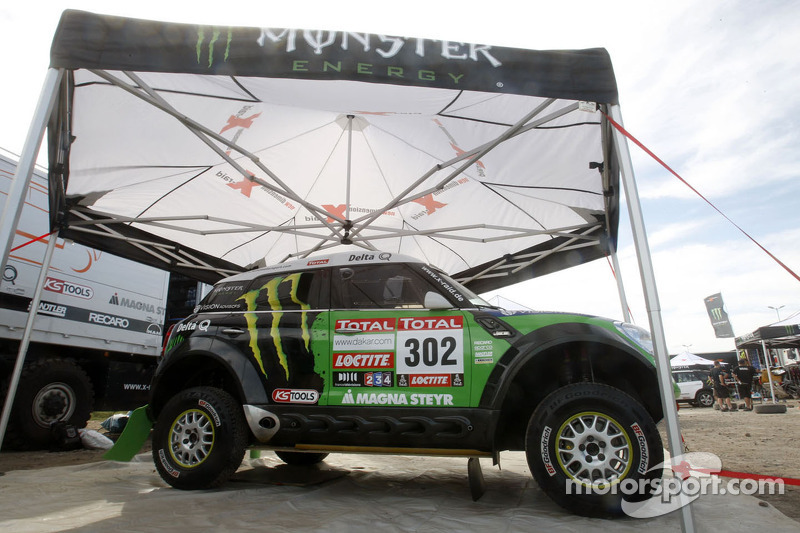 Team X-raid in Mar del Plata and ready to go

• All the team members have arrived in Mar del Plata, Argentina
• The 5 MINI All4 Racing and the 3 BMW X3 CC successfully passed the scrutineering 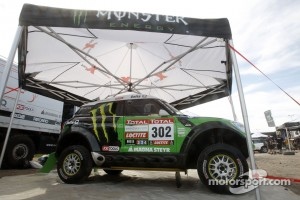 The car of Stéphane Peterhansel and Jean-Paul Cottret

Tomorrow, on New-Year’s Day, the Monster Energy X-raid Team will start into the 2012 Dakar Rally, taking the competitors from Argentina across Chile to Peru. Up to 30th December, all the 96 team members had arrived at the venue of the start into this year’s edition of the legendary event: the Argentinean city of Mar del Plata, located some 500 kilometres south to the country’s capital Buenos Aires. Even in the past days, the Argentineans demonstrated their motor-racing enthusiasm, with thousands of them crowding the streets around the service park and the Dakar Village. This morning, cars and drivers passed the scrutineering and the administrative checks respectively.

In the evening, the drivers presented themselves to the Argentinean crowds while crossing the podium erected on the Plaza Colon in Mal del Plata’s city centre. On 01st January, the drivers will start into the 8,000-kilometre adventure that will end at Lima, the capital of Peru – where those who have made it will cross the finish line on 15th January. The day of rest will be held on 08th January at Copiapo, Chile – well-known all over the world since 2010 for the spectacular rescue of the miners.

Some facts and figures around the Monster Energy X-raid Team:

The squad involved in the rally comprises 96 team members
The team enters five MINI All4 Racing and 3 BMW X3 CC
The spare parts and tools will be transported by 10 service trucks that also are equipped with workshops, a kitchen and an office.
An additional armada of eight BMW X5 and two BMW X6 will take the team members from bivouac to bivouac.
Regardless of the Dakar organisation’s catering service, the Monster Energy X-raid Team has got some 11,000 meals aboard – to make sure that the mechanics are well fed at any time.
The waste-disposal regulations during the Dakar are truly strict and so, every truck has been equipped with 500 garbage bags.
The Monster Energy X-raid Team has taken more than 500 tyres including wheels to the Dakar.