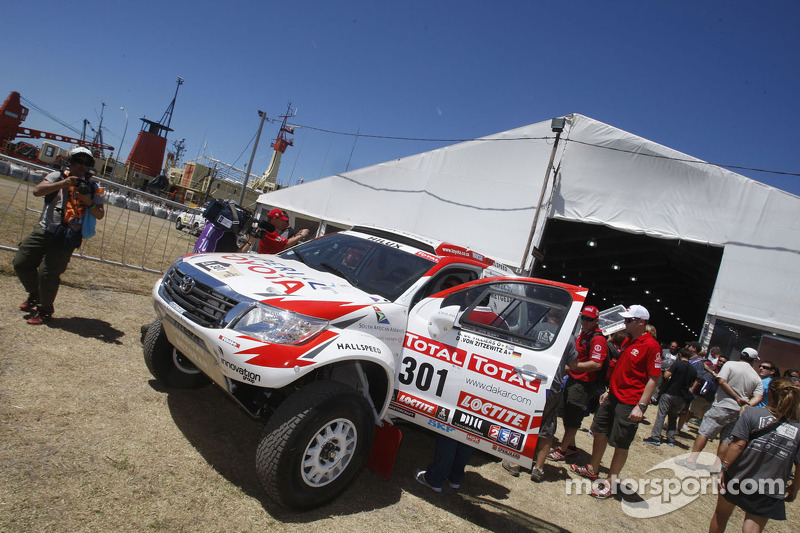 All good to go 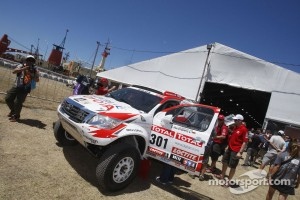 The Argentine Toyota Factory played generous host to the Imperial Toyota Team for the last two days. They made available their workshops, staff and canteens to provide the team with a base from where the cars could be assembled after their transatlantic trip, tested and signed off by the drivers as race-ready. A more appropriate facility would be hard to find as this plant manufactures only Hilux and Fortuner models, but produces 92,000 of them each year for export in South America. Throughout all the work, there was a constant audience of appreciative and enthusiastic Toyota employees in attendance.

The work culminated in a press conference held in honour of all the Toyota mounted competitors in the 2012 edition of the Dakar and a few quick “joyrides” for VIPs and selected members of the media. Apart from the Imperial Toyota team, there is also the Overdrive outfit in two South African Hilux bakkies, a Japanese crew in Land Cruisers and the inimitable seventy year old Mr Sugawara in one of two Hino Series 500's, entered in the truck category.

The service trucks have been packed, the support vehicles prepared, GPS’s loaded and a myriad of little details have been put to bed for the journey to Mar del Plata, where the race starts on Sunday.

After a few short bursts around the Toyota test track, both Giniel de Villiers and Duncan Vos declared themselves satisfied with their cars while also impressing the attendant spectators. There is no doubt that the South African built Hilux's look and sound the part.

The next two days will consist of travelling to Mar del Plata, scrutineering, press conferences, finalisation of race formalities and a New Year's eve party before the race kicks off on Sunday morning.

How well do they go?

Just as South Africans were ringing in the new year, Giniel de Villiers and Dirk von Zitzewitz, followed shortly afterwards by Duncan Vos and Rob Howie drove their Imperial Toyota Hilux's onto the 2012 Dakar starting ramp in Mar del Plata Argentina. The high regard that Giniel is held in by the international motorsport community was evident in the applause that greeted his arrival on the podium.

For this team, the Dakar has now officially begun. The racing starts tomorrow morning with a 150km liaison to a beautiful short, 60 km, competitive stage on the beach and in the dunes. After that, there is a 590km liaison stage to the next stop at Santa Rosa de la Pampa. The short stage will be treated as a bit of a shakedown by a number of the teams, allowing them to settle in for the 9,000km's that lie ahead.

The brand new Toyota Dealership in Mar del Plata, so new that the site where it is located still appears as green grass on Google Earth, generously made available their workshops and facilities for the final, final preparations and scrutineering, all of which took place without any hiccups.

While the Imperial Toyotas look and sound great and fills every South African with pride with their presence amongst the best the rest of the world has to offer, tomorrow will start to tell the real story. How well do they go? By tomorrow evening, we'll be closer to the answer.