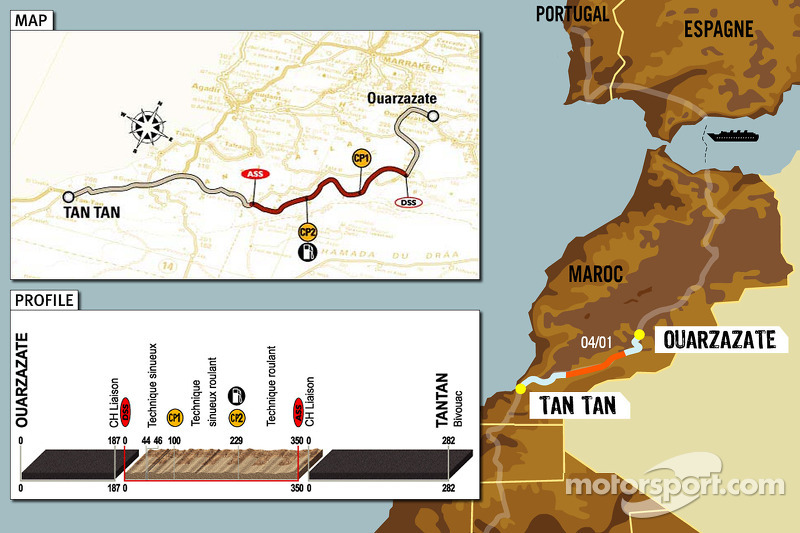 Stage 5 - Ouarzazate to Tan Tan January 4, 2006 Connection 187 km - Special 350 km - Connection 282 km Total 819 km The wadi road Communication between driver and co-driver will have to be fine-tuned to a maximum on account alternate fast ...

The wadi road
Communication between driver and co-driver will have to be fine-tuned to a maximum on account alternate fast stretches and navigational traps. In comparison to the 2005 edition, competitors will have almost tripled their mileage in specials before leaving Morocco. The timing of the 1,250 kms already covered should produce a coherent classification. 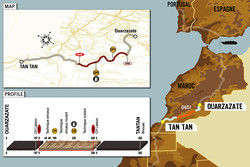 Stage 5: 2006-01-04, Ouarzazate to Tan Tan.
Photo by A.S.O.
15:24: Night watch
Latecomers, mechanical repairs, funny stories and nightmares... Life goes on after night fall in the Dakar bivouac. Every morning, don't miss out on what happened!

20:00 -- Podium hope fades away for Biasion
Driving an Iveco truck, former WRC champion Miki Biasion had the clear intention of remaining within shooting distance of race favourite Vladimir Chagin, and climb on the final podium in Dakar. The first day in the dunes decided differently. "It's over for the podium. We've had too many problems. After getting stuck in the sand, we broke two suspensions as well as the cable that stabilizes the cabin. We were forced to reduce our speed. I don't even know if the mechanics will have the time to repair everything during the night before tomorrow's stage."

22:30 -- It's over for Mrs Roma
Robert Otger had a very specific mission on the Dakar: to keep a close on eye on Nani Roma's wife Rosa Romero during the race. And that was indeed the only condition that made the 2004 bike winner allow his loved one to start the rally on a bike. But what hadn't been planned was that Robert broke his ankle on the liaison heading to Ouarzazate. Forced to withdraw, it was a huge disappointment for Rosa who still had the intention of carrying on alone. "I promised that I would do the Dakar under the condition that I was helped by someone, so I have to quit".

23:31 -- Lady quad at the bivouac
The only women on a quad, Emmanuelle Jannon eventually made it late at the bivouac. After taking off at 6:00 AM, the responsible for the 'Christian Dior' website spent a very long day, however full of satisfactions. "I really enjoyed myself in the Merzougha dunes. A lot of competitors were blocked but riding a quad is great. I then helped Patrice Grunewald who had fell but he had broken his collarbone. In the lat part, I was so exhausted that stopped several times. It was actually the best thing to do, both for me and the machine". The French biker intends on becoming the first woman to finish the Dakar on a quad.

23:50 -- Bailey out of the sand
'Same old stuff' ii the workshop of the SMG -- Vanguard Racing team with dozens of mechanics working on Ronn bailey's buggy. The American spent a lot of time stuck in the sand during the day and only made it to the bivouac at 9:00 PM. The steering device is to be changed.

0:00 -- Trouble for Gordon
It's behind the steering wheel of his Hummer assistance vehicle that Robby Gordon entered the huge bivouac catering zone. The NASCAR driver explained why he had made it so late at the finish of the day's stage. "We had a problem with transmission and that's what caused problem on our rear right wheel. I was therefore forced to stop for a long time. We were able to carry on but we really went slowly. It was a bad day for us but the Dakar is still very long."

1:30 -- All bikes have arrived
Only Spaniard Gianni Melloni was missing at the bivouac at the end of the stage. He eventually arrived in Ouarzazate.

5:45 -- Auriol on his way to Marrakech
Hubert Auriol, the first ever competitor to win the Dakar on a bike and in a car, failed to impress for his comeback. For the former event director, the rally stops after the second African stage due to mechanical problems. "We broke the ventilator, the radiator and then the whole engine. Now I'm heading back home." After a short rest in an Ouarzazate hotel, the 'African' took off to Marrakech.

11:16 - Fog in Tan Tan #Due to bad weather conditions and heavy fog in Tan Tan, all the planes and means of transmission are still blocked in Ouarzazate.

The live coverage of the race will not be able to be done in a normal way. We apologise to all the followers on the website.

07:47 - Beware of the Punctures
After this third and final day in Morocco, the competitors will have covered 1250kms of special, a record before entering Mauritania. The dune lovers that had a first taste during stage 4 will now have to wait until Mauritania to enjoy more sand. The day's program will be a lot trickier, sinuous and technical. Between the holes and the stones, the bikers, drivers and co-drivers will need that extra something and also some luck to avoid punctures.

It's probably a mix of these qualities that allowed Carlos Sainz to clinch victory yesterday and to re-capture the overall leadership. On a purely technical aspect, he has proved on all the different terrains of the World. But Stephane Peterhansel, who suffered a big navigation mistake that cost him dearly yesterday, will want to catch up lost time. And the man is a specialist when it comes to revenge. Time has come for Peter to hit back.

15:28 - Peter hits back in style
Title holder Stephane Peterhansel (Mitsubishi) conquered the day's stage in the car class. The Frenchman clocked the fastest time ahead of USA's Marc Miller (Volkswagen), 1'12" adrift. Third was Nani Roma at 2'20". The overall lead remains in the hands of Carlos Sainz who finished 9th today.

15:53 - Coma loses time overall
Overall leader before th start of the stage, Spaniard Marc Coma has lost time. He now has a 1'25" advantage on Cyril despres who moves up to second spot. Third is Esteve at 6'28"