Dakar Day-2: The pressure cranks up a notch 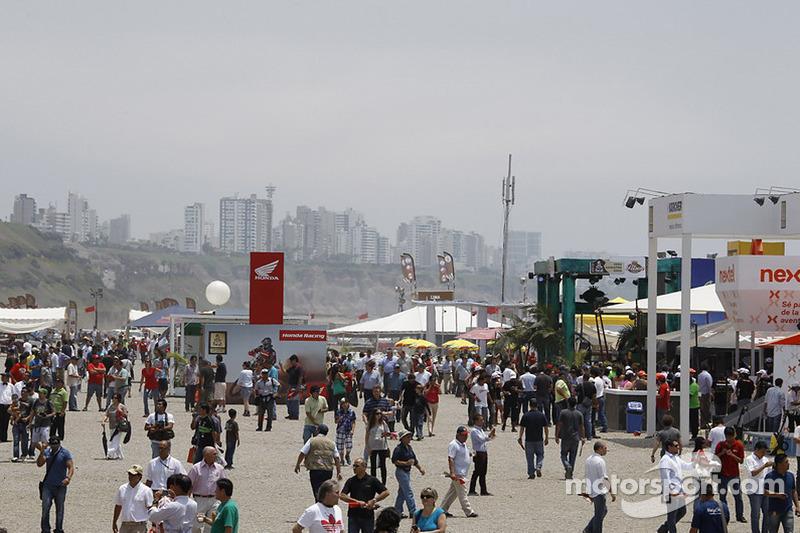 Today Dakar Village was filled with spectators to watch the favorites in the truck category under go technical and administrative scrutineering.

In Lima, the spectators have been hurrying to the Dakar Village and the scrutineering site, where the favourites in the truck category were in attendance during the second day. The riders and crews of the 35th Dakar are already focused on the 8,500 kilometres of roads, tracks and dunes that they will have to tackle to reach Santiago.

After an already rich introductory day, the technical and administrative scrutineering for the Dakar 2013 continued with the arrival of some of the pretenders to the crown. Firstly, it was the turn of the leading lights in the truck category who came through the gates of the waiting park to submit their vehicles to the race officials. 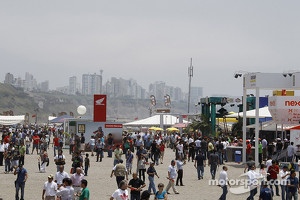 Fans check out the Dakar Village

Early inthe morning, the Kamaz team arrived all together at the site. The setbacks experienced on the 2012 edition now belong to the past for the team with ten wins, who are especially counting on Eduard Nikolaev and Ayrat Mardeev to reacquaint themselves with success. The Russian team now has a captain whose aura should energise the group, because Vladimir Chagin is making his debut as a team manager: “It’s a new start for me. It’s almost as if I was starting my first rally all over again,” said the seven times winner of the event.

The assurance of the “Tsar” could make his rivals tremble, but Gerard De Rooy, the title holder, gave short shrift to the idea that he was weighed down by responsibility: “In reality, it was last year that the pressure was strongest. Now we have seen the level we reached and know what we are capable of, but we are also aware that it can all change dramatically in an instant on the Dakar. I know I have the best race number, but that is only worth something on the first day. After that, the road will be a long one”.

In the quad category, following on from Patronelli and Maffei yesterday, their Polish rivals were present at the scrutineering site. To combat the domination of the Argentineans over the last three editions, they will certainly be buoyed by the enthusiasm of Rafal Sonik, who spent his year drumming up support for a national team project, which eventually came into being: “We have come together so that in our country, the supporters who have been following the Dakar with interest for a number of years can identify with a concept that speaks to all of them: a feeling of patriotism. It’s already a major victory to have succeeded in achieving this. For the rest, I’ve already finished 3rd on the Dakar in 2010, so I’ll be aiming for the podium again. But I repeat, I’ve already finished third”. 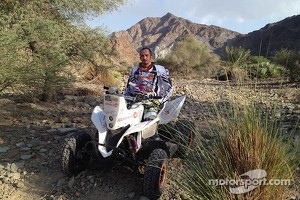 The message is clear: Sonik is only interested in aiming for the top! If the Polish machine can reach top speed, Lukasz Laskawiec, 3rd in 2011, will also be in with a shout. It is not sure that the pink quad belonging to Camelia Liparoti will enjoy the same success, but the only woman enrolled in the category intends to continue her progress after finishing in 9th place in 2012.

As regards the cars, several pretenders for the top 10 were in attendance, such as Mathias Kahle, Regis Delahaye or Pascal Thomasse, as were the favourites in the Production category, Xavier Foj, Jun Mitsuhashi and Nicolas Gibon. However, the organisers learned of the withdrawal of Bernhard Ten Brinke, 8th in 2012, who has stayed in the Netherlands following a death in his family.

Tomorrow, the major favourites in the bike and car categories will parade in front of the cameras: Cyril Despres will perhaps be accompanied by injured team-mate Coma as a coach of the highest order, whilst a first show of force is expected between the Minis of Peterhansel as well as his X-Raid team-mates and the vehicles driven by Nasser Al Attiyah, Carlos Sainz, Robby Gordon and Guerlain Chicherit.

Yamaha counts down to adventure for the 2013 Dakar Rally

Team Toyo: Get closer to the Dakar action - video