Honda rider Joan Barreda claimed victory in the second stage of the 2022 Dakar Rally on Monday, as GasGas rival Sam Sunderland finished second to move into the overall lead.

With overnight leader Daniel Sanders (GasGas) losing time to his rivals after opening the road and then conceding further ground with a costly navigational error, the bikes category was blown wide open in the 338km special between Ha'il and Al Qaisumah.

Spanish veteran Barreda took full advantage of Sanders' trouble, scoring his 28th Dakar stage win to thrust himself inside the top 10 in the general classifications after a difficult start to the rally on Saturday.

Having stood only 17th overall and 40 minutes down on Sanders heading into the stage, Barreda was quick from the get go on his Honda CRF 450 Rally bike, running second behind Sherco's Rui Goncalves before grabbing the lead at the fourth waypoint.

He continued to pull away from his rivals thereafter, eventually winning the stage by a comprehensive margin of 5m33s from Sunderland.

2017 Dakar winner Sunderland had endured his own fair share of troubles in the opening two days of the rally, but with Honda's Pablo Quintanilla also hitting trouble on Monday, his second-best time was quick enough to propel him to the top of the overall ranking.

Sunderland's teammates Kevin Benavides and Toby Price finished the second stage in third and fifth position, separated by Skyler Howles on the Husqvarna, rounding off a strong day for the Austrian manufacturer.

Joaquim Rodrigues was an impressive sixth for Hero, just over 10 minutes down on Barreda, with Stefan Svitoko (Slovnaft KTM) closely following him in seventh.

Adrien van Beveren led his Yamaha teammate Andrew Short in eighth, while the top 10 was rounded out by Aaron Mare on the Hero bike.

Further back, Sanders was provisionally classified in 22nd place after losing nearly 25 minutes to Barreda, with Quintanilla finishing three positions behind in 25th. 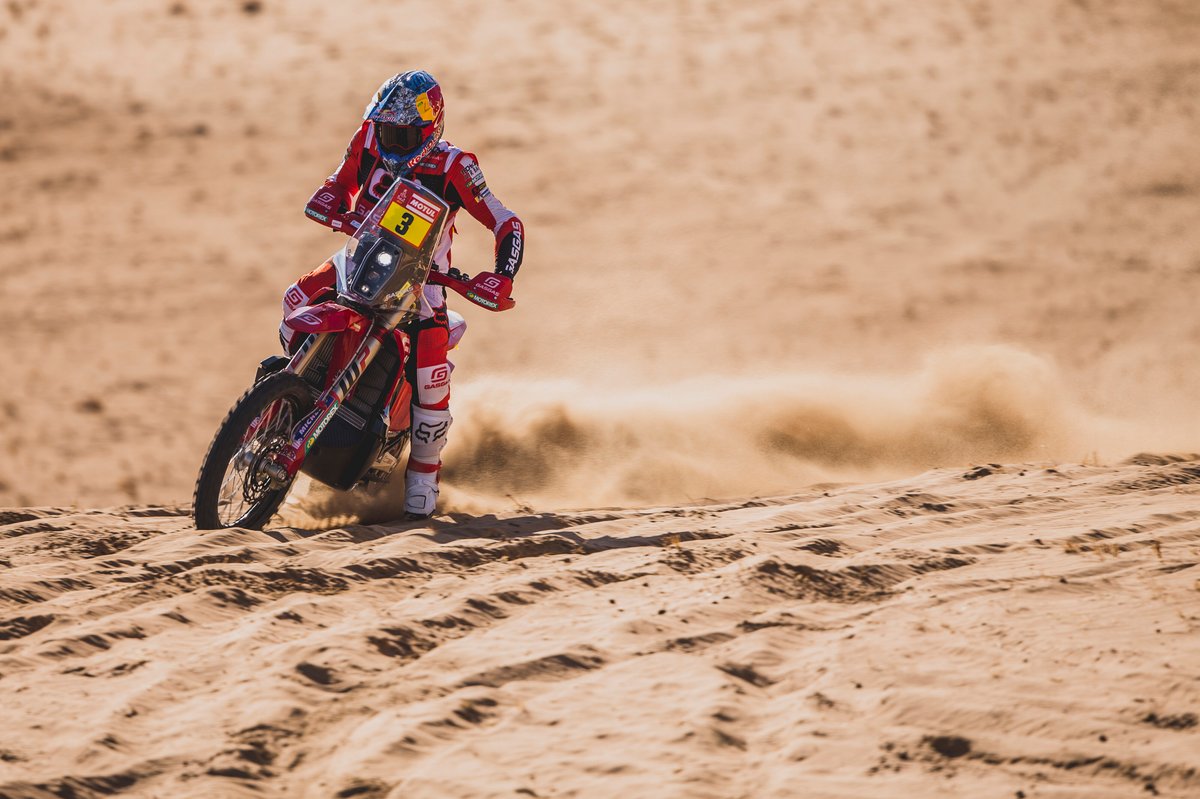 In the overall standings, Sunderland holds a narrow 2m51s lead over the Yamaha of van Beveren, with Sanders amazingly holding on to third place thanks to the buffer he built in Sunday's opening stage.

Matthias Walkner is the lead KTM rider in fourth despite finishing only 14th on Monday, with Howes and Lorenzo Santolino (Sherco) next up in fifth and sixth respectively.

Quintanilla slipped from second to seventh after dropping half an hour to the leaders, as Svitko and Mare ended up eighth and ninth respectively.

Barreda completed the top 10 but faces a 20m25s deficit to overall leader Sunderland with 10 stages still to run.

After an impressive run to 13th in Sunday's first stage near Ha'il, MotoGP race winner Danilo Petrucci's hopes of a competitive finish on his Dakar debut were dashed with mechanical problems in Stage 2.

Unable to fix his Tech 3-branded KTM after stopping at the 115km mark, Petrucci requested the organisers to airlift him to the bivouac, marking him as an official retirement.

However, thanks to a new rule introduced in Dakar this year, the Italian will be able to resume the rally on Tuesday to continue his transition from circuit racing.