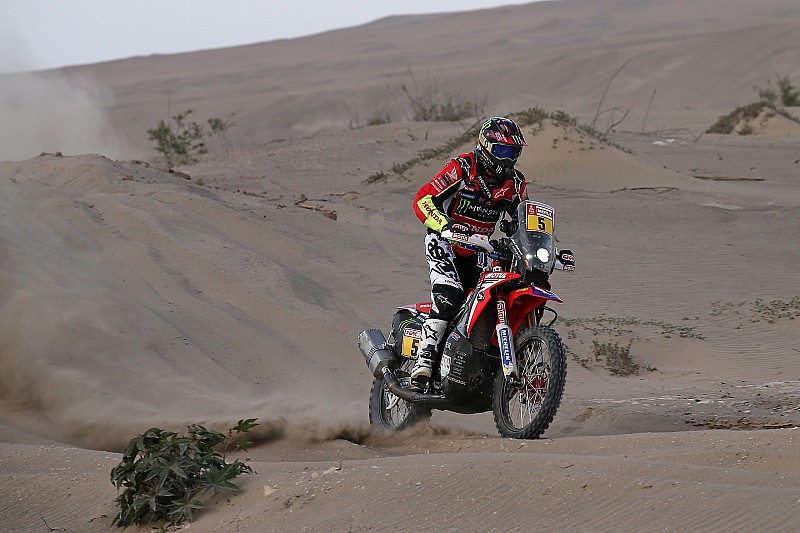 Joan Barreda notched up a third stage win of this year's Dakar Rally, as Adrien van Beveren reclaimed the outright lead in the bikes' category.

Saturday's 425km La Paz-Uyuni test was the longest of the South American event so far, but Honda rider Barreda was unstoppable from the outset, leading at each and every waypoint.

The Spaniard had begun the day in fifth overall, nine minutes behind teammate and erstwhile leader Kevin Benavides, but climbed to third after clinching the 21st stage win of his Dakar career.

Yamaha man van Beveren had been just under two minutes adrift of Benavides, and moved clear of the Argentine rider on a day he proved to be Barreda's nearest challenger.

Losing 2m51s to Barreda, he was 5m11s clear of third-placed Benavides and now holds an advantage of 3m14s in the standings. Barreda is now only 4m45s back.

Toby Price was KTM's highest-placed rider on the stage in fourth, but remains sixth overall behind KTM teammate Matthias Walkner and the second Yamaha of Xavier de Soultrait.

Frenchman Axel Dutrie scored his maiden stage win in the quad category of the Dakar, controlling the pace for most of the La Paz-Uyuni test.

The Chilean has extended his general classification lead over Alexis Hernandez to one hour and one minute.

Pablo Copetti, who was third entering the stage, dropped out of the rally due to fatigue and mechanical issues, his place in the general classification taken by compatriot Jeremias Gonzalez.

Up to 20 riders could still win Dakar, says Honda