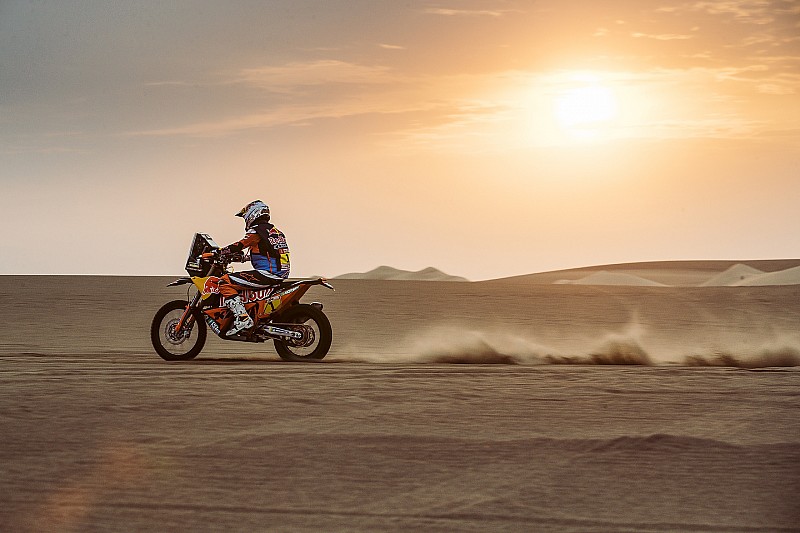 Yamaha's Adrian van Beveren has taken the lead of the 2018 Dakar Rally in the bikes category after winning a stage that claimed defending champion Sam Sunderland.

KTM rider Sunderland had to be evacuated by helicopter after suffering an accident on Tuesday's 330km San Juan de Marcona test, having held a lead of over four minutes at the head of the overall standings with two wins in the opening three stages of the rally.

The Briton sustained a back injury in the crash that was severe enough for doctors to rule out his continued participation in the event.

Sunderland's exit has shaken up the order in the general classification, which is now led by van Beveren after the Frenchman secured his second career Dakar stage win by five minutes.

Riders began the stage en masses in groups of 15 departing at five-minute intervals, and it was those starting in the second bunch - including van Beveren - that led the way for the majority of the stage.

In the end, it was Yamaha teammate Xavier de Soultrait who proved van Beveren's nearest opponent, albeit 5m01s down at the finish.

Matthias Walkner was third, another two minutes behind, and is now KTM's highest-placed rider overall after the demise of teammate Sunderland.

De Soultrait moves up from outside the top 10 into fifth, ahead of Toby Price (KTM).

Despite only finishing ninth on the stage, Barreda has climbed two positions overall to 13th, 22m08s off the lead - one place behind teammate Ricky Brabec, who has slipped from fifth to 12th.

The victory consolidates Karyakin's second place in the overall classification, and leaves him trailing Casale by 25m30s.

Alexis Hernandez was best of the rest behind the pair through stage four, which allowed the Peruvian to pass Pablo Copetti for third in the general standings.