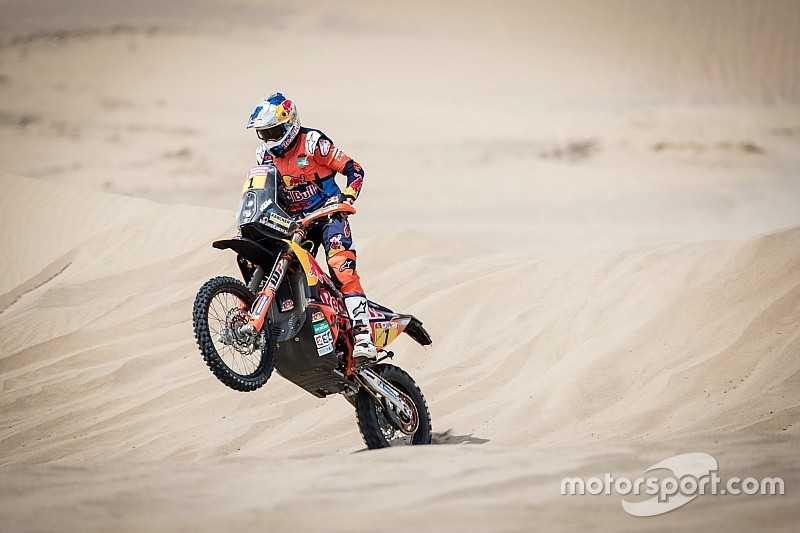 Sam Sunderland has retaken the lead of the 2018 Dakar Rally in the bikes category after winning the third stage, as overnight leader Joan Barreda lost considerable time.

Defending champion Sunderland picked up his second win of the rally - and the fourth of his Dakar career - on Monday's 296km Pisco - San Juan de Marcona test, having slipped to fourth overall on Sunday.

The Dubai-based Briton led through the opening three waypoints, before losing the lead to KTM teammate Toby Price and then Husqvarna's Pablo Quintanilla, who was set to win the stage until dropping some four minutes in the closing stages.

That opened the way for Sunderland to take honours by 3m03s from nearest rival Kevin Benavides (Honda), with Quintanilla slipping to fifth behind Price and Ricky Brabec (Honda).

It means Sunderland now leads the rally by 4m38s from Benavides, Quintanilla and Price, while Brabec has moved into the top five at the expense of Matthias Walkner (KTM), who dropped nine minutes to Sunderland.

While KTM now has three of its riders in the top six overall, the stage dealt a blow to the hopes of rival marques Honda and Yamaha.

Casale was just 1m43s clear of reigning champion Sergey Karyakin after the first two stages - but the Russian ended the Monday test 24 minutes off the pace.

He remains Casale's nearest rival, but is now under immediate pressure from Pablo Copetti and Alexis Hernandez.