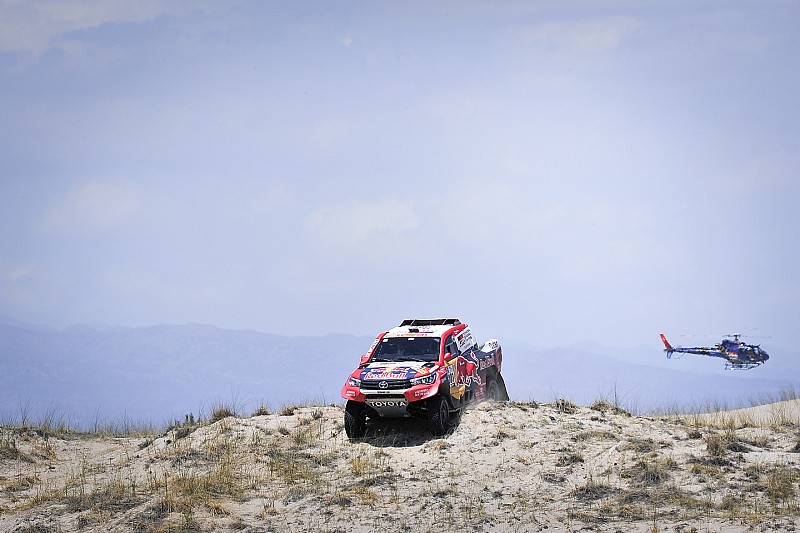 Al-Attiyah was two minutes quicker than Peterhansel through the 523km run between Chilecito and San Juan, on what was the 12th day of the two-week marathon.

The Dutchman was a minute and a half clear when arriving at the 90-kilometre mid-stage road section, but could not sustain his challenge for a second consecutive stage win, dropping behind Al-Attiyah and Peterhansel when the competitive running resumed.

The duo were neck and neck at that point, but the Qatari pulled clear at the very end, recording his third stage win of the event.

Peterhansel's second place was enough to make a significant dent in Sainz's lead in the general classification, as the Spaniard finished 18 minutes off Al-Attiyah's pace.

Sainz, however, has retained a 45-minute lead over Peterhansel in the general classification. With just 489km of competition left – and with him having had a 10-minute penalty rescinded on Wednesday – he remains a strong favourite to see out the marathon in front and give Peugeot a farewell Dakar win.

Toyota's Giniel de Villiers was a minute up on Terranova to make up the top three on the day, meaning the latter's X-raid Mini outfit is still chasing a first top-three stage finish in this year's Dakar.

De Villiers is now over 20 minutes behind Al-Attiyah and nine minutes behind ten Brinke in what is currently an all-Toyota fight for the final spot on the 2018 Dakar's podium.

Reigning Dakar champion Eduard Nikolaev and rival Federico Villagra are split by a single second with two stages left in the 2018 event.

The gap between the pair had been slashed heading into the stage by a 15-minute penalty for the Argentine, but Villagra looked set to rebuilt the advantage as he led Nikolaev by over half an hour early in the stage.

However, a long stop for the Iveco driver drew them back level - and by narrowly pipping Villagra to third in the stage, Kamaz driver Nikolaev moved back into the lead of the overall classification.

The stage itself was won by Villagra's teammate Ton van Genugten, who was four minutes clear of Tatra's Martin Kolomy.

Sainz had to complete Dakar stage stuck in third gear