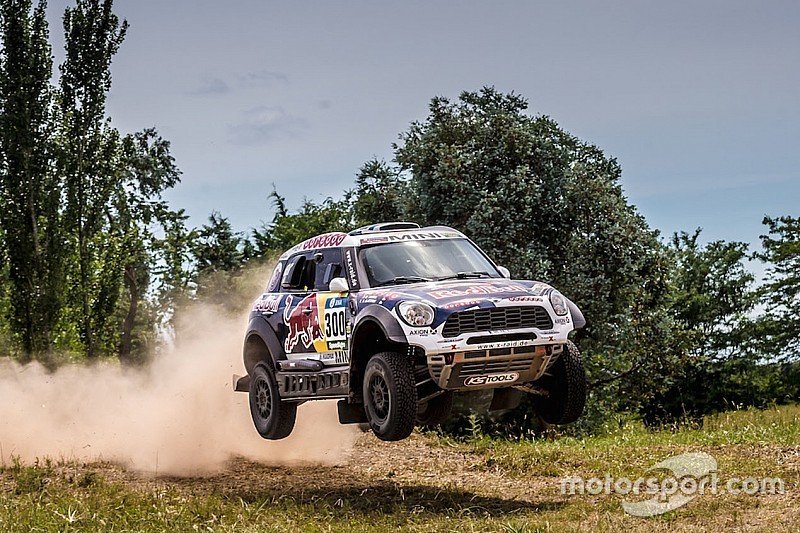 With the 2016 edition of the fearsome Dakar Rally getting under way on Sunday, Motorsport.com takes you through all the likely contenders for victory in the car and truck categories.

If you missed our guide to the bike and quad categories, you can read it by clicking here.

So good was reigning Dakar champion Nasser Al-Attiyah's 2015 campaign that many are rightfully worried the 2016 battle in the Cars class could be over before it's even begun. The Qatari, after all, headed last year's event by more than 35 minutes, and has since gone on to win titles in WRC2, the Middle East Rally Championship and FIA Cross-Country.

This has made Al-Attiyah the de facto team leader of the X-Raid Mini squad, which hasn't lost the category since Volkswagen departed at the end of 2011. But that's not to say 2016 is set to be a walkover.

First of all, he needs to see off his teammate – and 2014 winner – Nani Roma, who will be eager to put his DNF last year well and truly behind him.

The duo have another rapid squadmate in Orlando Terranova, who might have never finished above fifth in the Dakar, but made a big impression by winning four stages in the 2015 edition.

But it's the Toyotas that Al-Attiyah appears most worried about, the Qatari having noted that he expects the biggest challenge to come from Giniel de Villiers. The South African won the event in 2009 and has been runner-up on four occasions - and this time around, it is expected that the petrol-engined Toyota Hilux will be more well-suited to the route than Mini's diesel-powered All4 machines.

The Japanese manufacturer also has a dark horse in Yazeed Al-Rajhi among its ranks, the Saudi racer having run consistently at the front in his debut Dakar last year before his premature retirement.

Vladimir Vasilyev, who had left Mini for Toyota after winning a stage in 2015, is also a contender, having finished a strong runner-up to Al-Attiyah in the Morocco Rally. And there's no writing off Bernhard ten Brinke, who ran inside the top three early during last year's event.

Among the other names in contention will be Mini privateer Erik van Loon, who was fourth last year; Christian Lavielle, who left Toyota after a career-best sixth in 2015 to spearhead Renault's challenge; and Mitsubishi driver Carlos Sousa, who has finished between fourth and eighth in 10 of his past 11 Dakar appearances.

Then there's the reliably flashy Robby Gordon, a stage winner in six Dakars, piloting a self-designed Hummer-derived Gordini machine. The ex-NASCAR and IndyCar star is joined this year by X-Games gold medallist and Stadium Super Trucks champion Sheldon Creed, who will make history by becoming the youngest-ever driver to start the Dakar at the age of just 18.

Yet towering above all the other challengers is the newsmaker - Peugeot, which is again bringing a star-studded line-up after a difficult return outing in 2015. Headlining it is Dakar legend Stephane Peterhansel, who boasts an incredible 11 Dakar wins – six on bikes, five on cars.

The other heavy-hitter is two-time WRC champion and 2010 winner Carlos Sainz. There's little doubt both he and Peterhansel will be quick from the get-go – but there is a lot of doubt over whether the new-spec 2008DKR16 can last the whole distance.

The French team also has Cyril Despres, whose 34th place in 2015 was his worst in 14 years in the event – largely because he is now a rookie driver in cars, rather than a seasoned superstar on a bike, having conquered the motorcycle category on five occasions. Despres is still learning, but he needs to look no further than teammate Peterhansel to see an example of this kind of move paying off.

Finally, the big news is the arrival of rallying's “greatest of all time”, Sebastien Loeb. Now that Citroen no longer has a car for him in the WTCC, cross-country rallying with Peugeot is Loeb's main focus – and he has already looked plenty quick on his debut in Rally Morocco.

His long-time WRC rival Mikko Hirvonen, over in the Mini camp, is also looking sharp ahead of his own Dakar debut – and has the advantage of being paired with a four-time Dakar winner in co-driver Michel Perin, while Loeb is joined by long-time WRC co-driver and fellow novice Daniel Elena.

Although both Loeb and Hirvonen have played down expectations for their first attempts at Dakar, it's hard to imagine they'll be taking it easy once the visors go down.

And those who occasionally venture beyond motorsport might recognise Mini's Adam Malysz – a four-time ski jumping World Champion, three-time Olympic medallist and now also a rather handy cross-country driver.

Trucks - Can the Kamaz steamroller be halted?

Since the beginning of the century, the Trucks category has become virtually synonymous with Russian manufacturer Kamaz. At certain points, its dominance has verged on oppressive – it only let victory slip its grasp twice in the past 13 editions of the event, and last time out the podium was all-Kamaz.

The bad news for its rivals is that Kamaz's three heavy-hitters all have a win each to their names – and seem perfectly content to play the team game. As 2014 winner Andrey Karginov puts it: “We don't see any difference in which crew wins, but it has to be a Kamaz.”

The sentiment is echoed by Eduard Nikolaev, winner in 2013 as a driver and in 2010 as a mechanic, as well as Ayrat Mardeev – author of an emotional triumph last year just a few months on after having lost his father Ilgizar in a quad crash.

All three have proven they can win and, in case they should falter, Kamaz does have a back-up option in the less experienced Dmitry Sotnikov, who posted top-fives on his two appearances thus far and will have Karginov's former Dakar-winning navigator Igor Devyatkin alongside him for this race.

However, Kamaz's rivals have not been sitting idly by, and the 2016 edition promises to be one of the toughest for the Russian team – primarily because the two biggest threats to its success have now teamed up.

Ales Loprais, a Dakar stage winner on many an occasion and 'best of the rest' in 2015, has joined the IVECO team of one Gerard de Rooy, who currently stands as the last person to have denied Kamaz. Both do not rule out helping each other to victory – as long as their “joint enemy” is beaten. They can also rely on Trucks rookie Federico Villagra, of ex-WRC fame, who has already looked very strong in the machine in the Morocco Rally.

Loprais is to benefit from having Bernard der Kinderen as a mechanic, the latter having won Dakar in 2007 with Hans Stacey. Stacey himself, aged 57, looked to be done with the race for good after a quiet 2015, but a subsequent test with Veka's MAN went so well that the Dutchman has decided to give it another go.

Among those with an outside shot at glory, it is Martin van den Brink who stands out the most. Yes, he has yet to finish in the Top 10 in Dakar, but the underlying pace of his Renault truck was confirmed when he beat de Rooy's heralded team to victory in October's Rally Morocco.

On Tatra's side, frequent frontrunner Martin Kolomy will hope to be a factor and will have a teammate in Jaroslav Valtr, whose navigator Josef Kalina had helped Ales Loprais' uncle Karel to two Dakar wins.

Tatra also has a noteworthy client in the Astana squad, fielding a truck for Artur Ardavichus, who was best of the Kamaz runners in 2012 in a rare winless Dakar for the Russian marque.

Among the rest of the Dakar hopefuls, motorsport fans should note the presence of one Jan Lammers, winner of the 1988 Le Mans 24 Hours and veteran of 23 Formula 1 grands prix. The Dutchman was originally planning to do the 24-hour race again alongside Jos Verstappen, but the latter's decision to back out has allowed him to turn his attention back to Dakar.

X-raid: The waiting is over