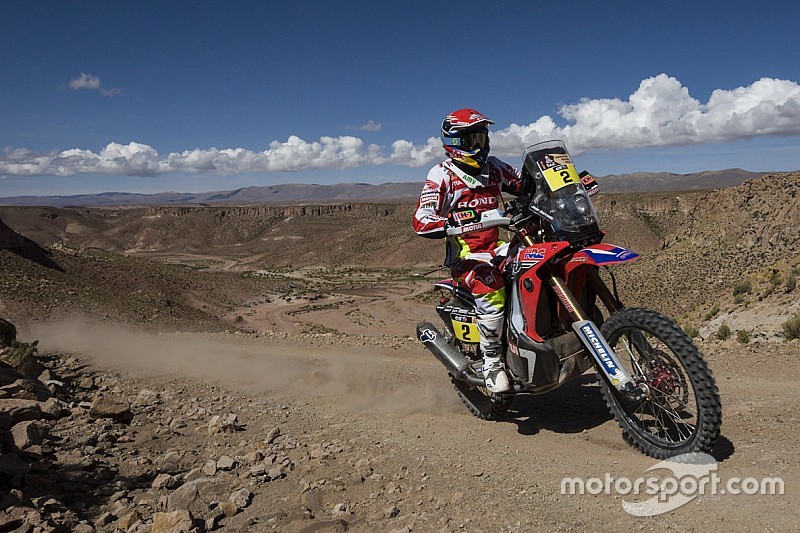 With the 2016 edition of the fearsome Dakar Rally getting under way on Sunday, Motorsport.com takes you through all the likely contenders for victory - starting with the bike and quad categories.

Cyril Despres and Marc Coma have turned the bikes category of the Dakar into something of a personal battle over the last decade. But with both now having left the stage – Despres making the switch to four wheels with Peugeot and Coma hanging up his helmet altogether to become the rally’s sporting director – the category will crown a new champion this year.

The most likely pretender to the throne is Joan Barreda, who spearheads Honda’s charge. A stage winner on no fewer than 13 occasions, the rapid Spaniard led much of the opening half of last year’s event before mechanical woes put paid to his hopes. He unquestionably has the speed and experience to triumph if he can avoid such troubles in 2016.

Honda’s other main hope of victory lies with 2015 runner-up Paulo Goncalves. The Portuguese rider enjoyed a breakthrough rally last year, emerging as the main challenger to Coma in the latter stages, having never previously finished higher than 10th overall.

Both Barreda and Goncalves will be ably assisted by water-carriers Michael Metge and Paolo Ceci, while American youngster Ricky Brabec will be making his first Dakar appearance as part of the factory HRC squad.

KTM has gone undefeated in the Dakar since 2001, but with Coma no longer part of the equation, the Austrian manufacturer will be looking to veteran Jordi Viladoms to assume the role of team leader. Second in 2014, the Spaniard fell victim to electronic troubles last year, and surely has his best chance of outright victory yet in what will be his 10th Dakar start.

With Sam Sunderland out of action, KTM’s two other most potent threats will be Toby Price and Matthias Walkner, both of whom won a stage apiece last year as Dakar rookies. While Walkner later had to pull out due to illness, Price came home a superb third, and both will be men to watch in 2016 – although their inexperience could count against them.

Elsewhere in the KTM stable, Stefan Svitko will be eager to follow up his fifth place last year with another strong showing, while fellow Slovak Ivan Jakes will be hungry for more stage wins after securing his first ones in 2015. Also in the hunt ought to be former podium finishers Olivier Pain, who had a rally to forget last year with Yamaha, and David Casteu, who ended the 2015 event in seventh overall.

KTM’s sister manufacturer Husqvarna meanwhile returns to Dakar after two years out, with Pablo Quintanilla and Ruben Faria, fourth and sixth respectively last year (the latter as water-carrier to Coma), leading its charge. Joining the duo on a third factory machine is another newcomer from the world of Enduro – Pela Renet, twice a champion in the E2 class.

Over at Yamaha, seven-time stage winner Helder Rodrigues joins the factory squad after a three-year stint at Honda, alongside Merzouga Rally winner Alessandro Botturi as well as junior riders Xavier de Solutrait and Adrian van Beveren, another Dakar rookie worth keeping an eye on.

Quads - Return of the Patronellis

Ever since the quads became a separate category in 2009, each and every Dakar winner in the class has rode a Yamaha. Of the five prior winners, four are back – all on Yamahas – in 2016, meaning that the Japanese manufacturer's supremacy is unlikely to cease any time soon.

Argentinian brothers Alejandro Patronelli and Marcos Patronelli, who took turns locking out the top step in Dakar between 2010 and 2013, are set to return in full force, having focussed on their family business in the past few years. As Alejandro puts it, the duo "won't fight" between them – so a fifth victory for the family could well be on the cards.

However, the Patronellis will have to overhaul Ignacio Casale, who became the first Chilean to win the Dakar in 2014 but struggled with injury last year, and Poland's Rafal Sonik, who had finished in the top-five on no fewer than five occasions before finally winning in 2015.

It is entirely possible, however, that the quad category will see a new winner crowned – but the competitor most capable of accomplishing that feat also rides a Yamaha. Jeremias Gonzalez, who finisher runner-up to Sonik in 2015 in what was just his second Dakar, turned 20 a month before the 2016 race and clearly has massive potential.

The biggest challenge to Yamaha is likely to come from the Honda contingent. Highly-regarded Qatari Mohammed Abu-Issa was fourth in 2014, but suffered an engine failure last year, when the last podium spot went to another Honda rider Walter Nosiglia.

Lucas Bonetto is no pushover either, having won the Argentinian cross-country championship on three occasions and being the only non-Yamaha rider who won a stage in 2015.

The only other manufacturer in play is Can-Am, the hopes of which are likely to hinge on another Argentinian cross-country champion Daniel Mazzucco, whose previous best finish in Dakar is eighth.

Our preview of the car and truck categories will be published later today (Saturday).