Chile: Stage 6 - Arica to Calama with soft dunes prior the hidden rocks - video 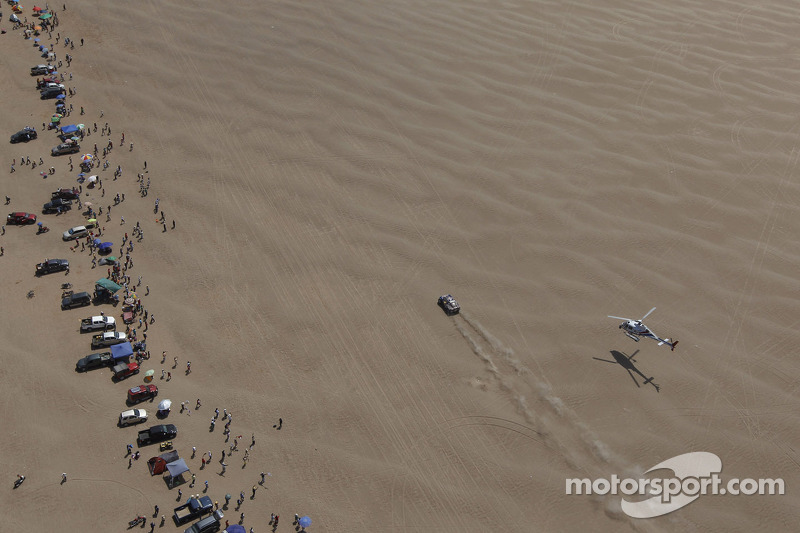 Chaleco king in his own country, bittersweet victory for Al Attiyah.

With a third stage victory on the Dakar 2013, Francisco Lopez provided a worthy celebration of the rally's arrival in his native Chile and moved into position behind the French trio of Pain, Despres and Casteu in the general standings. In the car category, Nasser Al Attiyah won his 17th special stage and gained on Stéphane Peterhansel, but, as team manager, this was tempered as his team-mate Carlos Sainz was forced to drop out of the race. 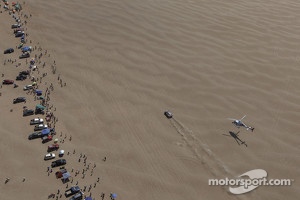 The Dakar has well and truly arrived in Chile! Although the riders and drivers already crossed the border yesterday evening from Peru on the way to the bivouac in Arica, they undertook their first special stage this year on Chilean soil. This is the sort of alert that sets the national idol's senses buzzing. On home soil, even before reaching the Atacama Desert, Chaleco triumphed on the special stage sending a warning signal about his intentions for the rally's finish in his home capital… in a dozen days! In the mean-time, his intermediate results are already impressive, especially for a rider who did not have a bike following the disappearance of the Bordone set-up one month before the start. With the KTM that he is riding for the Tamarugal team, Francisco Lopez has already won no less than half of the special stages on this edition so far, raising his total of stage victories on the Dakar to 9, including 5 in his native Chile. Today, it was Paulo Gonçalves who seemed to be heading for triumph, after having reached all the intermediate time check-points in the lead. However, the Portuguese rider was hampered by technical problems robbing him of the stage win.

Chaleco, who had three other KTMs hot on his heels ridden by Faria, Despres and newcomer Kurt Caselli, moves up two places in the general standings and is now in a position to barge into the 100% French trio which still leads the rally. The race order and gaps have been modified by the stage finishing in Calama: Cyril Despres is now 2'22'' behind Olivier Pain, whilst David Casteu drops down a place, trailing the leader by 4'48''. As for Lopez, he is only 6'06'' behind Olivier Pain.

Probably inspired by his countryman, Ignacio Casale also flew the Chilean flag over Calama by achieving the best time in the quad race in front of… Marcos Patronelli. Following the problems encountered by Sebastian Husseini yesterday, the young Chilean gained time by beating Marcos by 6 minutes today, but there is plenty more effort to be made if he really wants to worry the favourite, because the gap still amounts to 1 hour and 11 minutes.

Another hat-trick took place in the car race with the victory of Nasser Al Attiyah, who, like Chaleco has tasted success on 50% of the Dakar 2013 stages. His buggy finished the 438 kilometres on the menu with the best time and in style: the Qatari put a gap of almost eight minutes between himself and Stéphane Peterhansel in the stage results and more significantly, he moved to within only 1'18'' of the title holder, who still leads the general standings. The gap is tiny, especially in light of the time lost by the Frenchman's other pursuers, all affected in turn by problems or lost due to their hurriedness. Today, Nani Roma began by getting his Mini stuck in the sand for more than 30 minutes after 71 km at the same place where Giniel De Villiers lost ten minutes! What's more, 50% was also a number of bad luck for Al Attiyah from a team viewpoint, because it now represents the amount of his team remaining on the rally. After 179 kilometres of racing, the engine in Carlos Sainz's buggy gave up the ghost. For his return after a year's absence, El Matador exits the arena after having won one stage and experienced new driving sensations. It is not unlikely that the Spaniard will continue the challenge in the forthcoming years.

Gerard De Rooy experienced a similar day to Al Attiyah, to a certain extent. Whilst he won a 4th stage victory on this edition of the Dakar, the title holder witnessed the Kamaz trucks starting to find consistency. Nikolaev lies 18'40'' behind in the general standings, whilst Mardeev trails the Dutchman by 30'32''. What's more, stage 6 saw De Rooy's team-mates affected by major problems, because former winner Hans Stacey, yesterday's quickest driver in the category, lost a lot of time after rolling his truck over forwards! Although Stacey managed to get his truck back on track, the race lead is now way out of reach for him.