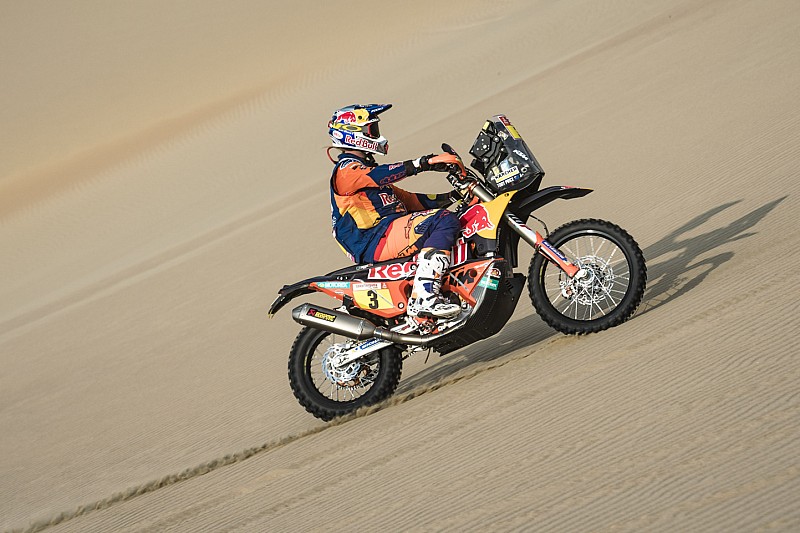 Toby Price became the 2019 Dakar Rally champion in the bike category by topping Stage 10, as main rival Pablo Quintanilla suffered a fall while attempting to beat the Australian.

Battling with a broken wrist he sustained while training before the event, Price became the first two-time champion to emerge since the rivalry of Marc Coma and Cyril Despres ended in 2015.

The Austrian manufacturer was subdued for much of the event, with Honda riders leading for the majority of the rally instead.

Joan Barreda had the strongest start to the event, but his title challenge was derailed by a hefty crash on Day 3, the Spaniard retiring from the rally for the third time in four years.

His teammate Ricky Brabec subsequently stepped up, the American trading the lead with Husqvarna's Quintanilla four times in the next five stages.

The field remained extremely close as the duo was joined by KTM trio Price, Matthias Walkner and Sam Sunderland, Yamaha's Adrien Van Beveren and another Honda of Kevin Benavides.

However, both Honda riders were out of contention before the final stretch of the rally - with Brabec's engine failing on Stage 8 and Benavides picking up a massive penalty of three hours for carrying illegal route notes on his bike.

Van Beveren was also ruled out of contention with an engine failure, while Sunderland received a penalty for modifying his monitoring system.

As a result, three riders remained in contention on the final day with Price leading Quintanilla by one minute, and reigning champion Walkner left with an outside shot, 6m35s adrift.

KTM's title became all but certain just 10 kilometres in as Quintanilla suffered a crash, costing him around eight minutes.

Price went on to top the stage, beating Jose Ignacio Cornejo by 2m21s, and seal the crown with a gap of 9m13s over Walkner, who ended his third consecutive Dakar Rally in the top two.

Quintanilla eventually finished with a deficit of 19m44s, which dropped him to third overall.

He was followed by his Husqvarna teammate Andrew Short, while Xavier De Soultrait and Cornejo led Yamaha's and Honda's respective efforts in fifth and sixth.

Luciano Benavides was seventh, closely followed by Sunderland, who would have been set for third place without the penalty.

The top 10 was completed by Hero's Oriol Mena and Daniel Nosiglia, while Laia Sanz secured 11th, her second-best finish after her ninth place in 2015.