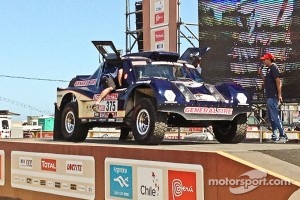 Darren Skilton has an addiction with Dakar that began over a decade ago. Since that time he has become the United States representative for the race’s sanctioning body (ASO) and returned to the rally in a myriad of capacities including navigator, support driver, mechanic, and racer. Last year Skilton and journalist Sue Mead won the Open Production class in a Ford Raptor shod with production General Grabber tires, but this year Skilton is looking to up the ante by jumping into the deep end of the pool, taking on heavy hitters such as Robby Gordon. “Volkswagen’s departure from the rally really opens up the field to privateers like myself,” Skilton commented. “I have a competitive car that has just been sitting and waiting for the right opportunity. That opportunity has arrived.”

Skilton will be piloting his SPD-built car in the Open Production class for SCORE-legal vehicles- SPD is responsible for championship-winning Trophy Trucks and hopes to add the Dakar Rally to their list of accomplishments. The unique vehicle uses full independent suspension and the latest King Racing Shocks. Each corner rides on Method Race Wheels shod in 35-inch General Grabber rubber. “Most American cars are too wide and heavy for the Dakar tracks, leading to flat tires and burned clutches in the dunes. My vision was to combine the best of American desert racing with the latest European rally technology. I am grateful that General Tire shares my vision and is giving my team the opportunity to earn them another Dakar victory,” Skilton explained.

Navigating for Skilton will be talented fabricator and fellow Baja 1000 class winner Skyler Gambrell. It is also worth noting that Gambrell is a championship mountain bike racer with the physical prowess necessary to endure the non-stop punishment that the Dakar Rally is famous for. “I am new to the navigation aspect of endurance rallying but bring a strong mechanical background and a never give up attitude to the cockpit. I look forward to the adventure of a lifetime in the Dakar Rally." The duo is joined by a veteran rally raid crew that possesses all of the resources and experience necessary to ensure success at the 2012 Dakar Rally.