Alessandro Botturi at the Dakar with Husqvarna Rallye Team By Speedbrain

Husqvarna Rallye Team By Speedbrain have signed up top Italian rider Alessandro Botturi to take part in the Dakar ’13 aboard the Husqvarna TE449 RR by Speedbrain.

This will be the second Dakar for the thirty-seven years old rider from Lumezzane (BS), after his surprising eighth place finish in last year’s rally which earned him the prize of "rookie rider" in the competition. 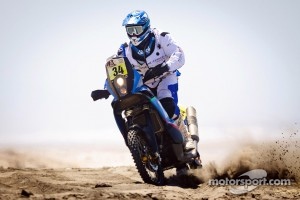 Botturi brings from the world of enduro a wealth of experience, in which he has won a string of important victories in the world championship and the International Six Days, as well as having taken nine Italian titles.

Botturi has been concentrating on international rallies for a year now, getting excellent results in the FIM Cross Country Rally, finishing in second overall place in the rally of Sardinia. "I feel really honoured to be a part of such a highly rated team like the Husqvarna Rallye Team By Speedbrain at the Dakar right now." – stated Alessandro Botturi. - "The TE449RR has proved itself to an extremely competitive bike especially in the most recent races.

It has won the Pharaons and was one of the main protagonists of the Morocco Rally. As always I’ll be doing my best to help bring the team success in such an important event. "

"Alessandro Botturi’s inclusion in the Husqvarna Rallye Team By Speedbrain settles the line-up for the next Dakar" points out team manager Wolfgang Fischer, "with Barreda, Goncalves, Fish and Botturi we’ve got an extremely competitive team that blends well together, who we can rely on to be right up there with the competition.

I like to take this opportunity to wish Cody Quinn all the best after his thigh-bone injury at last week’s Baja 1000, who won’t be able to form part of the team, but will be on the Husqvarna TE449RR by Speedbrain as soon as he will be fully recovered."

It all begins in Le Havre...

A million fans to see off the Dakar