The Queen 69 with Aleš Loprais went well as in the previous stage, the 504 crew was at waypoints around the fifth place.

The eighth stage of the Dakar test, which led from Salta in Argentina to Calama in Chile, started yesterday for trucks two minutes before 2 pm local time. Crews had to leave in the 302 km long special stage the Ands behind their backs, overcome a lot of steep climbs and descents and again to cope with all challenges which is the Dakar adventure famous for.

The Queen 69 with Aleš Loprais went well as in the previous stage, the 504 crew was at waypoints around the fifth place. Over the half of the special stage Aleš Loprais dropped to the seventh place, but in the last climb fought the Queen 69 and her crew back. Aleš Loprais overtook three racers and it was a fourth place in the finish. Although is this place often referred as unpopular in the competition is certainly a success. Aleš Loprais lost equal 8 minutes to the winning Karginov from Kamaz and a minute and five seconds to the third Stonikov, also from Kamaz. And that it was a fight is evidenced by the fact that the fifth Versluis with Man lost to Aleš Loprais only 33 seconds. 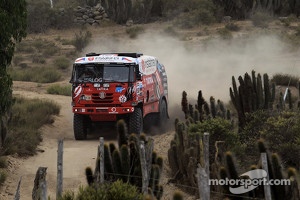 “Hello everyone. Today fast, but also very breaking stage. It must be recognized that the Kamaz trucks have unbeatable chassis this year. This also applies to the engine. We cannot keep up with them in extremely stony passages. So I am really glad for movement to the TOP 5. Our race continues,” comments Aleš Loprais yesterday stage.

For interest – Aleš Loprais, who had the physiotherapist put together due to back pain, has mastered this 302 km long and demanding stage in 3 hours and 92 seconds, therefore he raced with the Queen 69 averaging for 100 km per hour. The second team’s crew of Jan Tománek finished yesterday race on the 18th place with a half-hour loss. In the overall ranking moved Aleš Loprais thanks to yesterday’s stage up from sixth to the fifth place, he is loosing and hour and 48 minutes to the leading de Rooy. Aleš is loosing a little over half an hour to the third Nikolajev. Jan Tománek is after yesterday’s stage on the 18th place.

The connecting section: 29 km / The special stage: 422 km This stage will reach the most northern point of the 2014 Dakar Rally, which will be in Iquique. A 422 km long special stage will be mainly about the driving down the hill. The start will be at an altitude of 3000 meters above sea level and the stage will bring racers to the coast of the Pacific Ocean! Above all, the drivers and teams will discover the Atacama Dunes again after a first part of a special stage which will run through the Tarapacá region, which is famous for great wine. Dune specialists will be in command over a distance of almost 150km. Thrills will be guaranteed at the very end of the day, on the last three kilometres of the descent to Iquique: there is more than a 30% difference in height from start to finish and it is almost not recommended to break. The law of gravitation takes on its full meaning: the bivouac is not far away!