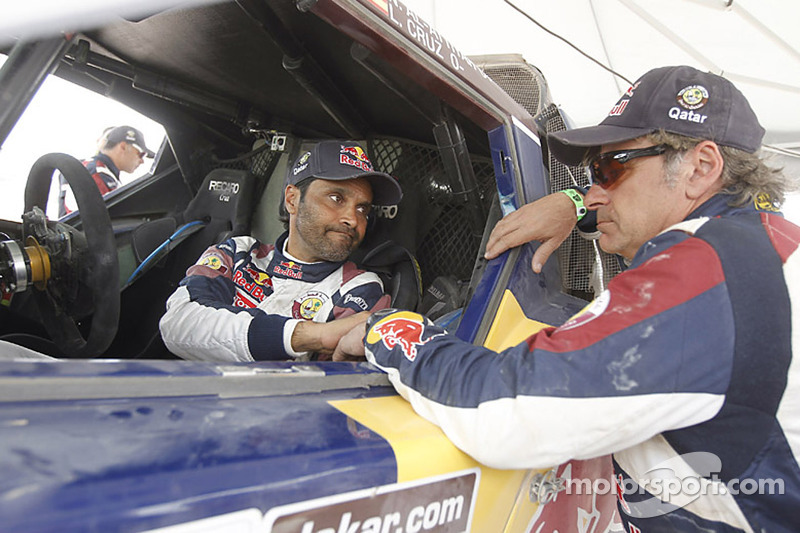 It was a day where the overall leaders held their ground even without winning the first special stage in Chile today. Now those who remain will rest in Calama before taking on their next challenge in the magnificent Andes mountain range.

Rarely in the Dakar does everything go as planned, or so Nasser Al-Attiyah found out as both team leader and head driver of the Qatar Red Bull buggy program, combining the joy of his stage six win today with the disappointment of Carlos Sainz’s early retirement in the other buggy. “I've had a lot of problems since the start of the rally, and today just took the biscuit!” said Sainz.

Still, Al-Attiyah can take comfort in his lessened gap to race leader Stéphane Peterhansel which is now just over a minute. But to overtake the Frenchman Al-Attiyah will have to push his buggy harder, as Peterhansel is consistently on the podium to lessen any damage, and brought his Mini across the finish in Calama, Chile second today.

“We had our first mishap today in the dunes around Iquique,” Peterhansel said. “The sand was very soft. Nani took advantage to overtake us, but several kilometres further on, we saw him stuck in a hollow, which just goes to show how complicated it is.”

On the charge far down the overall leaderboards but right behind Peterhansel on the special stage was Robby Gordon, looking for singular victories now after rolling his Hummer early on. He was followed by Orlando Terranova going well in the X-Raid BMW, but that team’s latest stage winner, Nani Roma, did not make it to the bivouac on time having stuck his Mini in the sand for half an hour near Arica. Giniel de Villiers was delayed by the same sand as well, but by only ten minutes. He still holds a distant third overall in his Toyota. 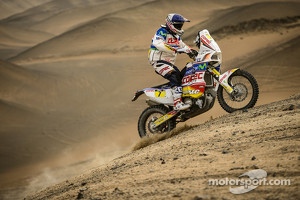 Francisco Lopez has a history of impressing in his homeland, and in the first all-Chilean stage of this Dakar he won by over two minutes. Additionally, he led three other KTM’s home on a day reminiscent of the brand’s former domination; Ruben Faria and Cyril Despres rounded out the podium, while American KTM stand-in Kurt Caselli made extraordinary progress by finishing fourth in only his sixth Dakar stage.

Lopez commented: “The first part of the special went very well, but on the second section, the engine lost a fair bit of power and I started wondering whether it was a fuel problem or due to the altitude. I don't know, but I should find out when I get to the bivouac.”

Yamaha retained the majority on the overall podium with Olivier Pain leading, though David Casteu had to step down to third to make way for a steadily-placing Despres. While those three are separated by only five minutes, Lopez is now just two minutes adrift of them, and as the rally continues into Chile he may start to overtake.

The home advantage of that country appears to have affected quad rider Ignacio Casale as well, who finally broke the string of stage victories of Argentine Marcos Patronelli. The win had little effect on the standings, however, as Patronelli is still ahead by more than an hour since rival Sebastian Husseini lost several hours yesterday.

I haven't got the words to tell you how happy I am.

The young Casale said of his first stage win: “It's like a dream finishing in front of all these riders who are so, so good like Marcos or Husseini. It also proves that I'm capable of a good pace and that I can ride very well.”

“I haven't got the words to tell you how happy I am.”

The Trucks category was once again won by Gerard de Rooy and his Iveco, but only by 35 seconds over Devyatkin Karginov, who was himself separated by a single second from Kamaz teammate Eduard Nikolaev. De Rooy still holds the lead, but it appears as though the Russian Kamaz machine is beginning heat up, and Iveco suffered a massive blow when Hans Stacey actually rolled his 25,000 pound truck forward. The beast was eventually righted but its rally is over.

Tomorrow’s stage form Calama to Salta will begin with a convoy section over the Andes, topping out at the race’s highest altitude of 16,300 feet. On the way down, competitors will encounter mostly dirt and gravel terrain but must contend with the thinner mountain air in their lungs. Bike riders will stay in a detached bivouac as part of their marathon stage.

Bad luck for Maxxis Super B Team during 5th stage

Botturi still up with the leaders in Dakar sixth stage